The Windows Subsystem for Linux now includes a first preview of support for GUI applications! This means you can now run your favorite GUI editors, tools, and applications, to develop, test, build and run your Linux apps! Please view the video below for a demo: For more info on this change please view this blog post.

We partnered with the Microsoft Edge team to support process classification in Task Manager. This will help you to identify resource consumption under Microsoft Edge. The classification is broken down to several different components like Tabs, Browser processes (Browser, GPU Process, Crashpad), Utility plugins (Utility: Audio Service Extensions), Dedicated & Service workers etc. It also features separate icons for each process to help you identify them including fav icon for website. Head over to this Microsoft Edge blog post for a list of detailed improvements. 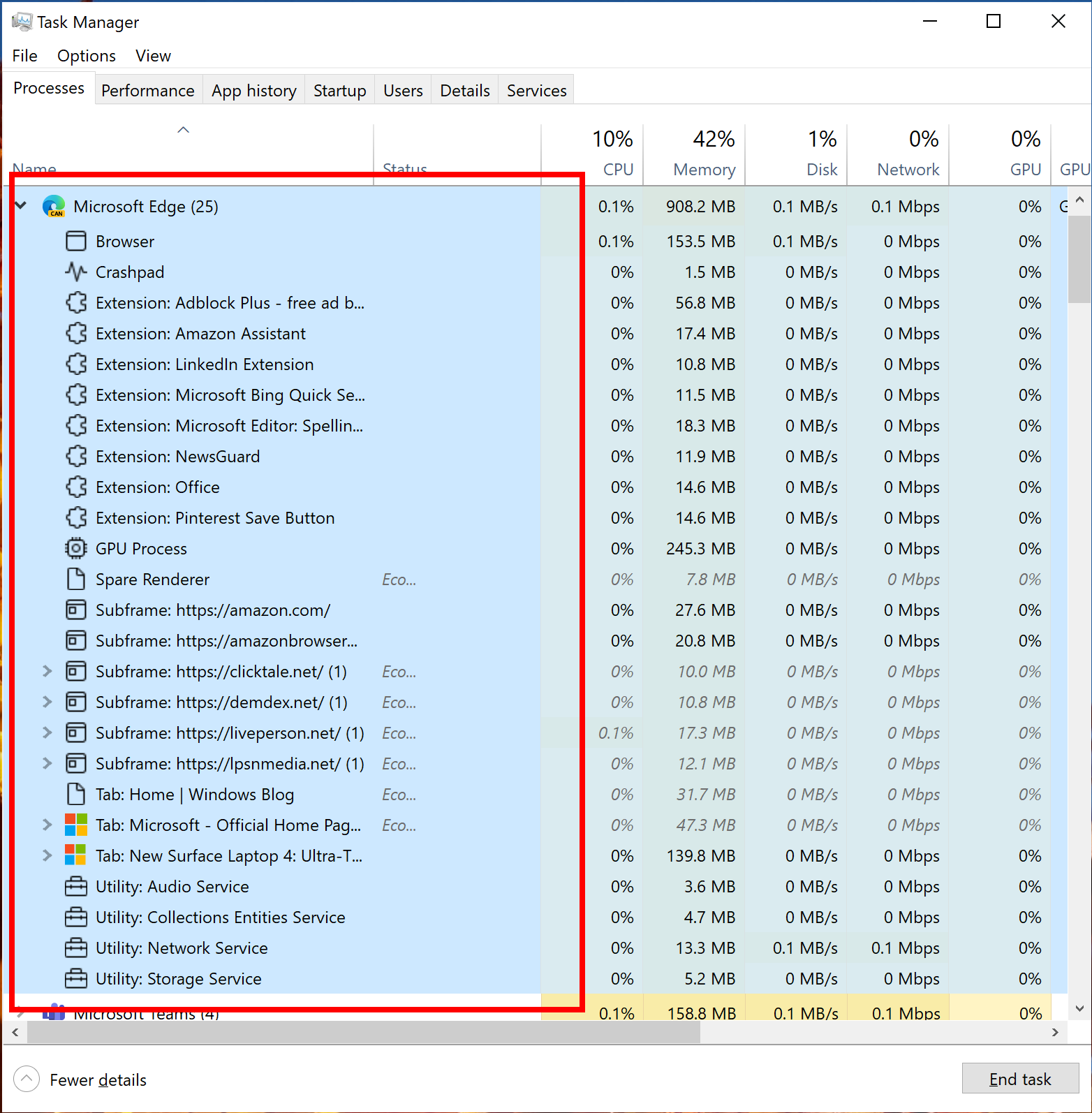 NOTE: This feature is available to Windows Insiders that are running the latest Microsoft Edge Canary or Dev builds. Insiders can download the latest version here. This feature is also rolling out to a subset of Insiders in the Dev Channel at first, to help us quickly identify issues that may impact performance and reliability. Rest assured they will be gradually rolled out to everyone in the Dev Channel.

Task Manager has a new experimental feature in this build called “Eco mode” which provides users with an option to throttle process resources. It will also help identify apps that are already running in Eco mode. This feature is helpful when you notice an app consuming high resources and would like to limit its consumption so that the system gives priority to other apps which will lead to faster foreground responsiveness and better energy efficiency. 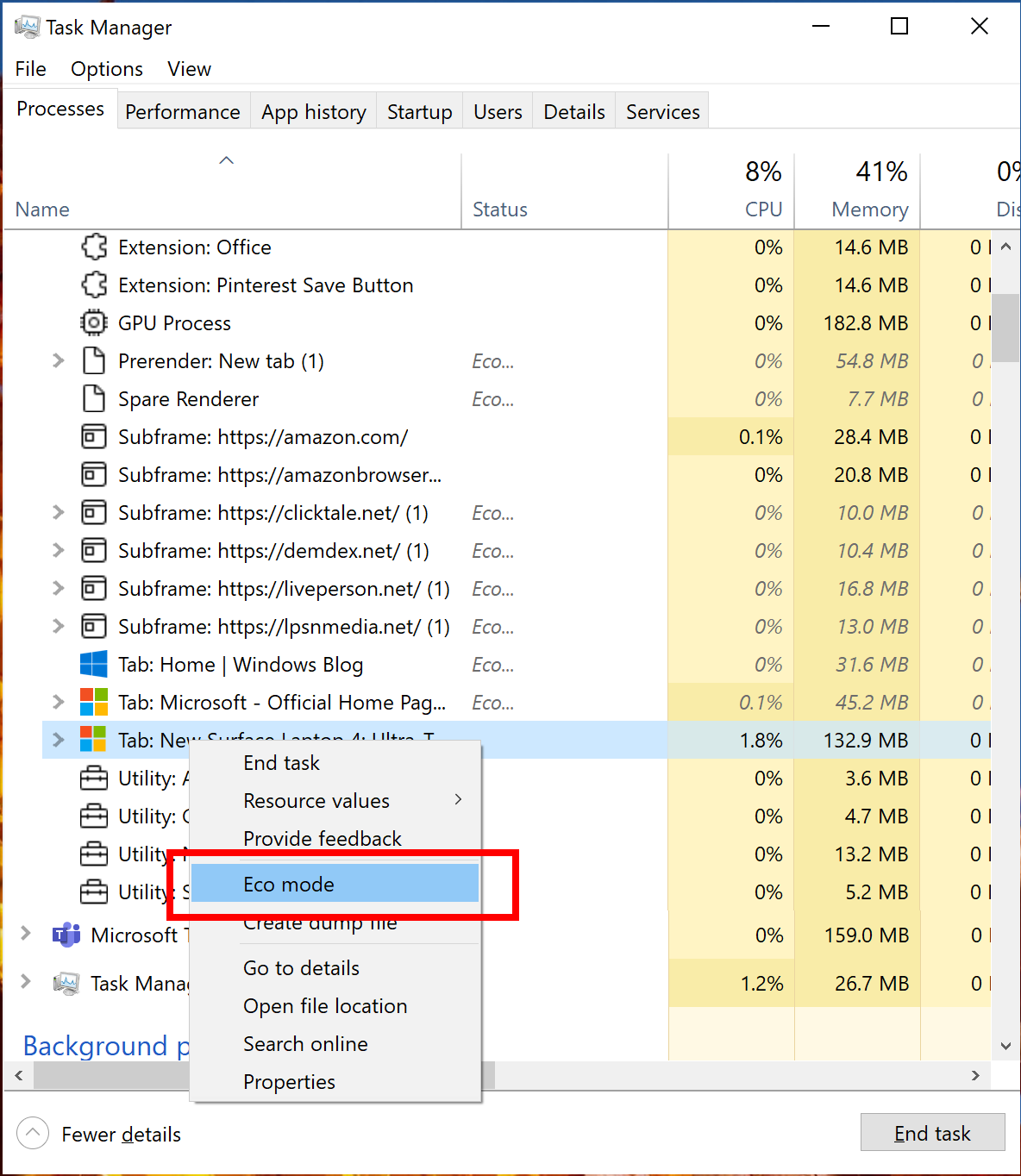 Here is how to enable Eco mode for any process:
This same process also works on the Details tab too. If “Eco mode” is greyed out, then it’s a parent/group process. You can expand the process tree to apply Eco mode on one of its child processes. And if Microsoft Edge (or Chrome) is showing “Eco mode” as enabled but you did not apply it, this is due to both Microsoft Edge and Chrome experimenting with lowering base priority and applying power efficiency APIs to improve performance which is similar to what Task Manager is doing to identify “Eco” efficient apps. You may see other apps with “Eco mode” if they adapt to similar techniques to improve performance. You can submit feedback on these recent Task Manager changes in Feedback Hub under Desktop Environment > Task Manager. NOTE: This feature is rolling out to a subset of Insiders in the Dev Channel at first, to help us quickly identify issues that may impact performance and reliability. Rest assured they will be gradually rolled out to everyone in the Dev Channel.

You can switch to 50-on layout from [⚙] > [50-on]. It also provides alphabet and symbol views newly designed specifically for the layout. You may notice some known issues where inserting a full-width space using Shift key doesn't work and typing some characters shows garbled suggestion candidates. We're actively working on addressing them. Thank you for your patience. We're looking forward to your feedback via [Give feedback] menu!