News Feed
Hello Windows Insiders, today we are releasing Windows 11 Insider Preview Build 22621.730 and Build 22623.730 (KB5017385) to the Beta Channel.
Insiders who were previously on Build 22622 will automatically get moved to Build 22623 via an enablement package. The enablement package artificially increments the build number for the update with new features getting rolled out and turned on to make it easier to differentiate from devices with the update with features off by default. This approach is being used for the Beta Channel only and is not indicative of any changes or plans for final feature rollouts. As a reminder, Insiders who landed in the group with new features turned off by default (Build 22621.xxxx) can check for updates and choose to install the update that will have features rolling out (Build 22623.xxx).

We’re re-introducing the touch-optimized taskbar that’s designed to make you feel more confident and comfortable using your device as a tablet. Your taskbar will automatically transition to this optimized version when you disconnect or fold back the keyboard on your 2-in-1 device. This feature only works on devices that can be used as tablets. It does not work on laptops or desktop PCs. As a reminder, there are two states of this taskbar: collapsed and expanded. In the collapsed state, the taskbar gets out your way, gives you more screen space, and prevents you from accidentally invoking the taskbar when you’re holding your tablet. In the expanded state, the taskbar is optimized to be easier to use with touch. You can easily switch between the two states by swiping up and down on the bottom of your device. [caption id="attachment_175532" align="alignnone" width="1024"] 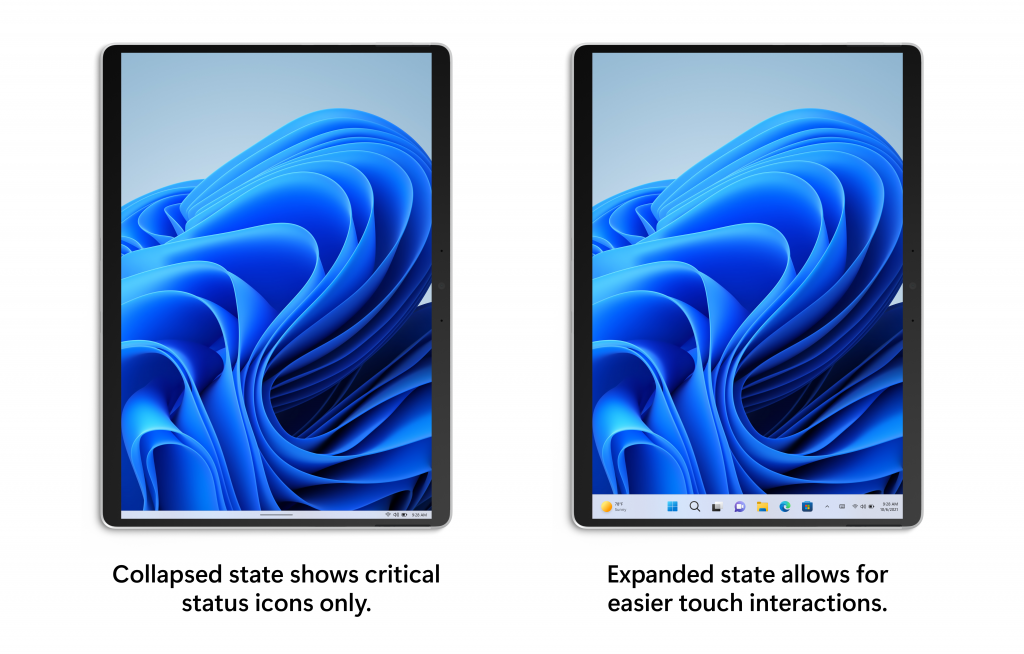 Tablet-optimized taskbar in both collapsed and expanded states.[/caption] If this feature is available, you will see a new setting at Settings > Personalization > Taskbar > Taskbar behaviors called “Optimize taskbar for touch interactions when this device is used as a tablet” that will be set to on by default. [We are beginning to roll this feature out, so it isn’t available to all Insiders just yet as we plan to monitor feedback and see how it lands before pushing it out to everyone.] FEEDBACK: Please file feedback in Feedback Hub (WIN + F) under Desktop Environment > Taskbar.

This update introduces updates to the System Tray that affect all device types — not just 2-in-1 devices. With this change, users will see a rounded focus and hover treatment on all icons in the lower right due to the continued modernization of this experience. You may also notice that it is not possible to drag and drop or rearrange your system tray icons with this change. We heard your feedback on this change earlier this year and are working to address this in a future Insider Preview build. [We are beginning to roll this feature out, so it isn’t available to all Insiders just yet as we plan to monitor feedback and see how it lands before pushing it out to everyone.] FEEDBACK: Please file feedback in Feedback Hub (WIN + F) under Desktop Environment > System Tray.

Try the new Outlook for Windows ​

Windows Insiders who are also Office Insiders can try out the new Outlook for Windows. Office Insiders running Beta Channel or Current Channel (Preview) will see a “Try the New Outlook” toggle located in the upper-right corner of your classic Outlook for Windows. Just toggle this on and follow the onscreen instructions. In the coming weeks, this experience will also be made available for Windows Insiders in a similar toggle within the Windows Mail app. [caption id="attachment_175872" align="alignnone" width="1280"]


About the Beta Channel​