More than 40 people were killed in Pakistan last week in a US drone attack near the Afghan border. The use of unmanned drones have always been controversial, but ex-CIA director Michael Hayden says they are winning the war. 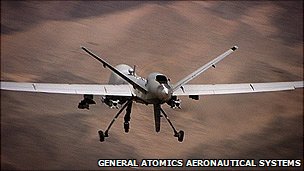 Ten years on from 9/11, al-Qaeda appears to be on the back foot. One of the main reasons is that its leadership no longer enjoys untouchable sanctuary in the tribal areas of Pakistan where for many years it has been able to plot and train its recruits.

The reason? Pilotless American drone aircraft with a payload of deadly Hellfire missiles, guided to their targets by remote control from thousands of miles away in the American desert.

Not for nothing are the drones known as "Predators".

Former CIA director, Gen Michael Hayden, could not sing their praises loudly enough - although ironically the word "drone" cannot pass his lips, so sensitive and allegedly secret is the CIA's programme of targeted killings.

How can a programme be secret when its results are plain for all to see? 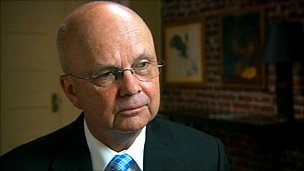 Gen Michael Hayden believed the results had been spectacular.

"A significant fraction of al-Qaeda senior leadership in the tribal region has been 'taken off the battlefield'," he said.

"That used to mean 'killed or captured'. In the last couple of years it simply means killed. We just aren't doing any capturing."

Ironically the CIA's drone programme was greatly accelerated under President Obama who has authorised more than 160 Predator missions - four times as many as his predecessor, President George W Bush, targeting not just al-Qaeda but Taliban leaders also hiding in the border areas.

The programme has been highly contentious and controversial.

Gen Hayden denied the attacks were state-authorised assassinations. He said the US was at war with al-Qaeda and the Taliban, and was simply acting in self-defence.

When I pointed out that legally the war was in Afghanistan not Pakistan, he said that was not how the American administration looked at it.

"No they're not assassinations. This is a war, this is action against opposing armed enemy force. This is an inherent right of America to self-defence.

"I can only fulfil my moral and legal responsibilities to the citizens of my republic by taking this war to this enemy wherever they may be."

There is another side to the equation.

However effective the CIA may believe its programme to be, it has damaged America's reputation in Pakistan still further, fuelling anti-American propaganda and bringing yet more recruits to the militants' cause.

Hundreds of civilians have been killed in the attacks, although it is impossible to put a precise figure on the number of innocent victims.

It is estimated by the New America Foundation that between 2004 and 2010 they may have been responsible for around 25% of those killed.

Human rights lawyers on both sides of the Atlantic have grown increasingly concerned about the US government appearing to act as judge, jury and executioner.

Jameel Jaffer of the American Council for Civil Liberties said: "This is quite an awesome power, the power to label somebody as an enemy [then] wipe them out without judicial process of any kind."

His sentiments are echoed by the director of Reprieve, Clive Stafford Smith.

"Who does get killed? Are these really Taliban people and al-Qaeda or are they random civilians who had nothing to do with it?" he said.
"I think we'd be naive to believe the propaganda that says that firing these fantastic weapons is killing the right people."


Gen Hayden has not been fazed by such arguments.

"It has been a very strong significant force in making the al-Qaeda senior leadership spend most of their waking moments worrying about their survival, rather than threatening yours or mine. And that is a war-winning effort," he told me.

But other highly-respected and experienced voices in the intelligence community do not share Gen Hayden's view about winning the war.

In her first television interview, I asked the former director general of MI5, Baroness Manningham-Buller, if she thought the war was winnable. She has spent 40 years fighting terrorism.

"Not in a military sense. There won't be a Waterloo or an al-Alamein," she said.

"The terminology about winning the war on terror was not something that I ever subscribed to.

At the end of the interview, given her long experience in fighting terrorism in Northern Ireland and her intimate knowledge of the secret talks between MI5 and the IRA, I asked her if we should talk to al-Qaeda as we had once talked to the IRA.

Her reply took me by surprise. "I would hope that people are trying to do so," she said.

"It's always better to talk to the people who are attacking you than attacking them, if you can.

"I don't know whether they are, but I would hope that people are trying to reach out to the Taliban, to people on the edges of al-Qaeda to talk to them."

I then asked her if she thought that al-Qaeda would listen.

What Bin Laden’s Death Means For The War On Terror