News Feed
In the few years since TJ Lee left everything behind to travel the world – and share her adventures with an ever-growing number of online fans – with only a carry-on suitcase and a backpack, she’s learned a lot. The first year she worked entirely remotely and took on all sorts of freelance gigs to make money: social media management, photo headshots and building websites. But she spent days working on videos – only to be disappointed in the number of views they got. She’d get free products and experiences in exchange for making videos about them – but they’d end up taking much more time than the value of the things she got. Then, by more trial and error, she realized she could do a better job of getting paid to pursue her passions of traveling and food vlogging. Four years later, she’s built a following of almost half a million on various platforms – including YouTube and TikTok – generating a consistent array of videos and brand-sponsored social media posts. Among the many companies she works with is Razer, which recently provided her with a new Windows 11 laptop as one of its brand ambassadors. On her site, she created a “vlogger academy” to help others with lessons she learned as a full-time influencer (though for now, she’s taking a break from coaching). “When I became an actual content creator, it was a totally different world,” says Lee, who grew up in southern California, graduated from University of California, Davis and worked 15-hour days for a time doing community management for a San Francisco-based tech company. But she wanted to work remotely, see more of the world and more of her family in Taiwan. She knew it wasn’t going to be easy. “Being a freelancer, you have to run your own schedule, you have to do everything and you don't have health insurance.” Her academy included: a three-month set of custom courses that has personalized YouTube strategies, one on one coaching, accountability sessions, pitch scripts for paid collaborations and a community of like-minded entrepreneurs. She knows it’s a tempting but tough road for most people and there are plenty of hurdles. [caption id="attachment_176627" align="aligncenter" width="1024"] 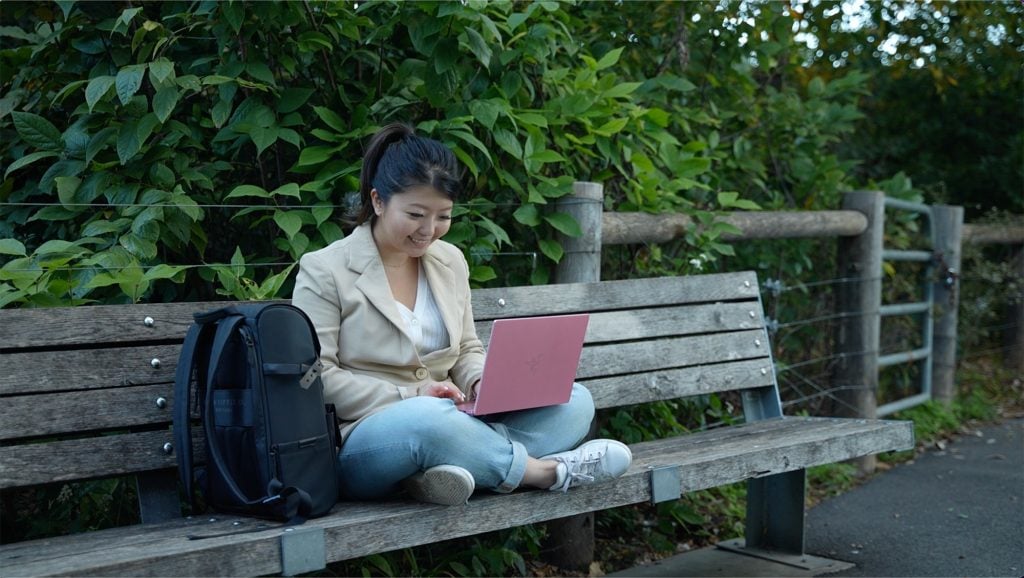 TJ Lee working on her Razer Book Quartz outside on a bench. (Photo by Lucas Huang.)[/caption] “You’ve got to be able to manage your own schedule and be able to figure out all the different moving pieces,” she says. “You’re the marketer. You’re the editor. You're the producer, the director, you're everything. And being able to take on all of those roles requires a learning curve. And it requires time. I tell people, try to take it slow and try to figure this out. To do this full time – and do it right – takes longer than you think and it takes much more work than you think. It's a lot harder than you think. But you’re planting all the seeds. You can't give up because you're not going to see all the efforts bloom right away, so just keep going on.” Now based in New York City, she had to switch up her own strategy of focusing on travel and eating out when the 2020 lockdowns made that impossible. She had moved there to pursue another dream: acting. She’s taking classes and has landed several roles, including one on a long-running crime procedural. [caption id="attachment_176619" align="alignright" width="456"] 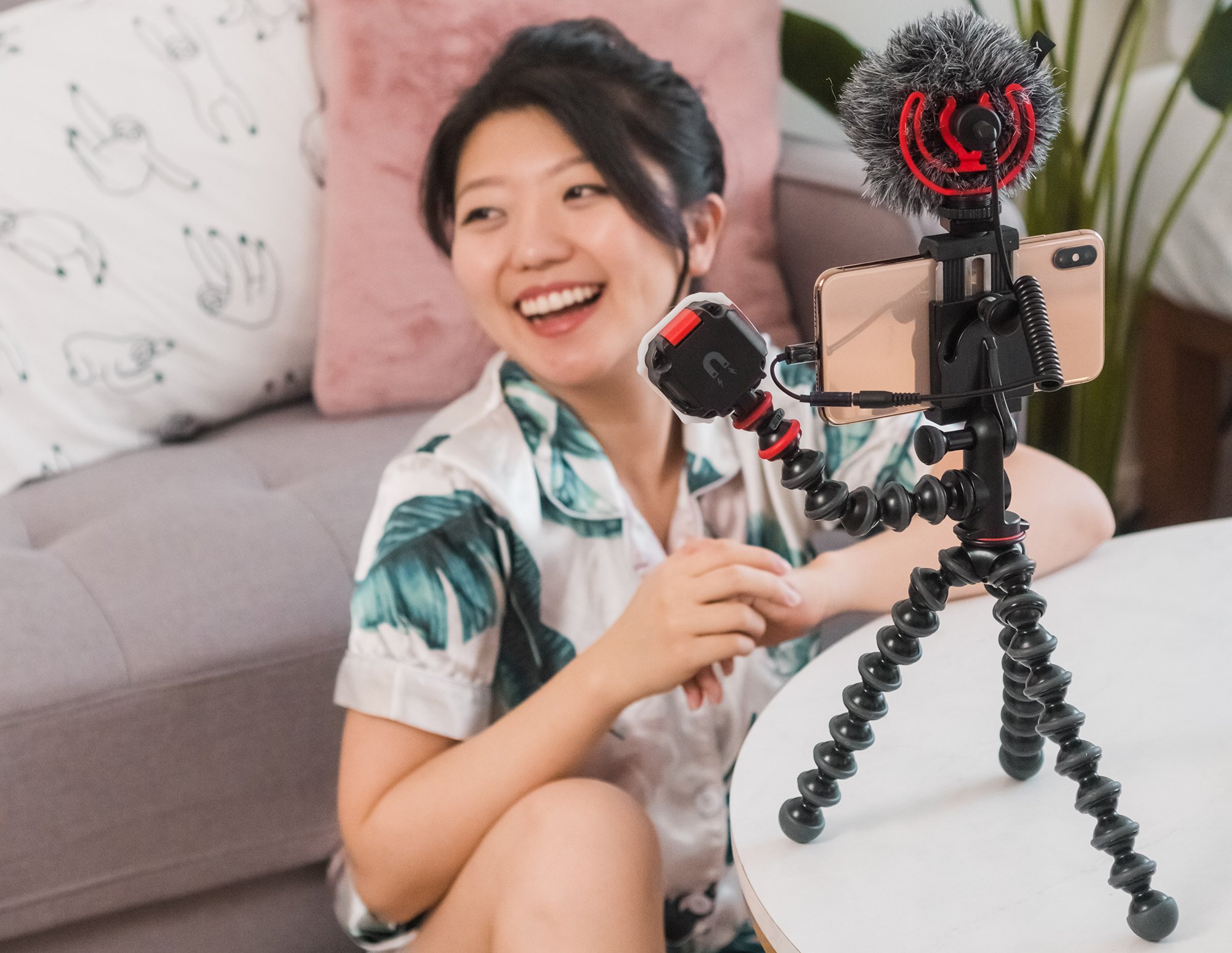 TJ Lee working on her phone. (Photo by TJ Lee)[/caption] “I was really shy and so I did theater to get over it,” says Lee, who has clearly overcome any discomfort in front of the camera. “I actually double majored in political science and dramatic arts, but I had to drop dramatic arts because my parents didn't want me to be an actor. It wasn't a career that they could see me in. And back then we didn't have so many Asian Americans in films.” But she was by herself in the city during a pandemic and homesick for her family in Taiwan, where she was born. “Cooking food and making dishes that I grew up with was kind of a comfort thing for me,” Lee says. “And that's actually how I started learning how to cook, during quarantine.” So that led to several short videos about those cooking techniques and reviewing grocery staples, and some longer videos checking out dining options. Some of those videos can run close to a half hour – but that kind of content also comes with a plan. “I love to do listicles, so if I tell my viewers I’m going to five different spots, they're following along to hit five out of five spots,” she says. Or, she’ll work with a three-meal format that also retains viewers. “Not only do you have to create the content, but you also have to create different types of content for different platforms.” So, for her, the work is constant. This means filming and editing her creations as well as prep work and scripting. Then there are the administrative tasks, pairing with the right brands to be able to fund it all. And on top of all that, she’s a stickler for engaging with fans. “Without them, you're not here,” she says. She finds that a big help – especially while she’s out and about, which is happening more again – is her Razer Book Quartz. [caption id="attachment_176621" align="aligncenter" width="1024"] 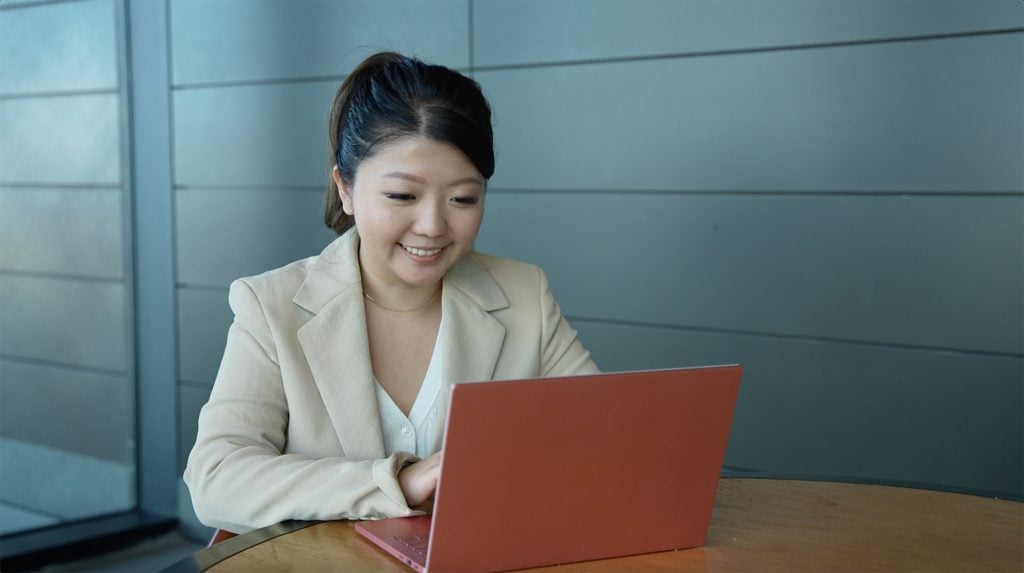 TJ Lee working on her Razer Book Quartz. (Photo by Lucas Huang)[/caption] “It's so portable and it's so beautiful, probably the prettiest laptop I've ever had,” she says. “The keyboard lights up. The battery never seems to die.” And she’s not just using it for work – she loves the quality of the screen so much she watches all her shows on the laptop. For her, having a touchscreen is something new, and something she’s using a lot with Windows 11, particularly with one of its new features: widgets. “I can see my calendar for the week and my to-do’s all right there. So that's been a really cool feature to have and I can just swipe it with my fingers,” says Lee, who’s also been using snap layouts to organize her tabs and OneDrive to upload all her photos, which also pops up immediately on her phone – something that happens quickly. That pace is nothing new for Lee. “Every single day is like the wild wild west. I don't know what's going to happen today or tomorrow. You are working for yourself and for your dreams and there's nothing more empowering,” she says. “I will say this, though: it's harder and more exhausting than any job I've ever had before, but also more fulfilling to be able to do what you love and share it with the world.” Lead photo by Daniel Nguyen.

Yes, I know her. I love what she does. I get a lot of inspiration from her when I go on trips. Before I used to go shopping when I went on trips and to the most famous places and that's it. But now I have completely different interests when I go on trips. I noticed that she goes on various interesting tours when she visits a new city. Now I do too. I've been surfing the internet for a while, and I'm looking for potential tours that I could go on. For example, in a week, I will go to Hanoi, and on this link, I found some free tours in Hanoi. I'm so excited!