How I Got Started as an App Developer 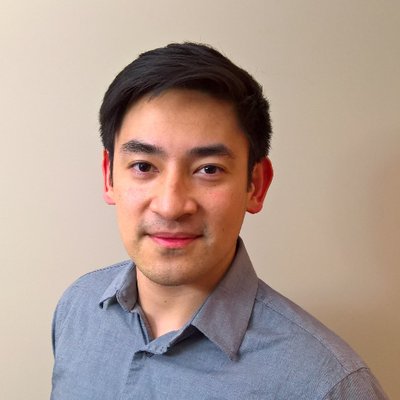 Daniel Paulino created his first Windows app when he was at a career crossroads: Was he good enough to have a successful career as a developer? He wasn’t sure, but Daniel also knew he needed a timer app that connected to his workout band. “At the time, no app did this. I had this curiosity. That drove me back into building apps,” Daniel says. Daniel’s curiosity has served him well. Today, he is the creator of multiple Windows apps, including Pillbox, Nightingale and Ambie. He is also a software engineer on the Windows apps team — and it’s safe to say Daniel is a Microsoft devices and tooling fanatic. “I’ve been around the block, but I keep coming back to Visual Studio, .NET, and WinUI. I’m addicted to Microsoft’s advanced set of tooling. It empowers me to take what’s in my brain and put it into an app.” Looking at the many apps Daniel has released in the last five years, it would be easy to conclude his career path was straightforward — but from Daniel’s perspective, becoming a developer was more indirect: It came from following his passions.


From a hobby to a career​

He was well into university before he considered software development as a career. Growing up, Daniel spent a lot of time in hospitals, watching doctors investigate both he and his mother’s medical issues. He became fascinated by the doctors’ curiosity and how they worked from interrogation and discovery to understand the root causes of disease. This interest made Daniel plan to study Molecular Biology at Simon Fraser University in Vancouver — until he had to take a course in Python. Daniel had always been drawn to computers, even though his family could not afford to buy a new one. Out of necessity, Daniel became the family expert at optimizing the operating system — he had even cleaned up the Windows OS registry on an old PC until it ran as well as the new devices his friends had. Despite his passion for technology, Daniel never believed that his hobby could become a career — until that Python course, and after a guest speaker at his university asked him if he had ever heard of Bioinformatics. That moment changed the rest of his career: Daniel’s school offered a joint major program that fused his passions for medicine and immunology and his growing love for computer science. This discovery opened a new world.

Looking back at his school experiences, Daniel is quick to recommend new developers build tools that solve real-world problems. He had a revelatory moment at his first bioinformatics job when his boss suggested that Daniel build the first-ever C++ tool that efficiently closed gaps in the human genome. The experience left an indelible mark: he was struck by how impactful his work could be. Following this experience, Daniel applied and was accepted to a software engineering internship at Microsoft Garage. It was his first role exclusively as a developer. He and the four other interns on his team had four months to build their product, a Windows Phone app, from start to finish. While he learned a lot about collaboration, Daniel’s biggest takeaway was how much he needed to grow. Daniel recalls, “It was a very humbling experience. I wasn’t good enough at the time and that was hard to accept.” Daniel even considered removing computer science from his degree. While he felt uncertain about what direction to take, Daniel turned to developing apps to solve real problems. “It was this passion and curiosity that reignited my interest in software. I didn’t actively stop myself from quitting, but I let myself be curious.” [caption id="attachment_56198" align="aligncenter" width="1500"]

Daniel’s proudest achievement came from one of the apps he built during this time, Pillbox. The app tracks a user’s medication schedule and reminds users when to take their pills. He built it to help his mother keep track of her wide variety of medications. His mother’s real-world challenge proved to be the perfect place for Daniel to put his app development skills to work. He was eager to help his mother and excited to learn about databases and notifications — two integral pieces of the app. Daniel’s mother also acted as his stakeholder, helping him make the app easier to use when she requested new features. Developing Pillbox shaped how Daniel thinks about development: Not only had he learned how to work with a stakeholder, but he also got to see the impact the technology had on his mother. Even though she was far from a tech enthusiast, she could load all her information in the app, keep it up to date and easily share her information with her doctor. What stuck with Daniel the most was how he was able to empower his mother. He says a defining moment came when “One day we went to the ER and the nurse asked if my mom took any medicines. When she showed them the app, the nurse was so excited and asked where she got it. My mom was able to say, ‘My son made it for me.’” [caption id="attachment_56199" align="aligncenter" width="300"] 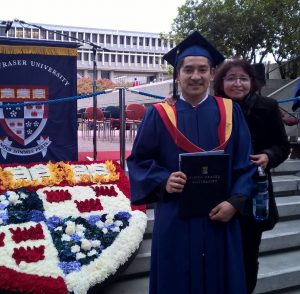 Daniel with his mom at his graduation from Simon Fraser University.[/caption] Daniel recommends this kind of real-world problem-solving. “Be curious. Build software that empowers people. That will teach you a lot about yourself.”

Daniel continued to develop Windows apps after he graduated from university — while also starting a full-time job building bioinformatics tools. His development skills and enthusiasm for software development grew faster than ever, thanks to this cycle of developing both at work and home. Eventually, he hit a learning ceiling and Daniel realized that he needed to focus exclusively on development as a career. 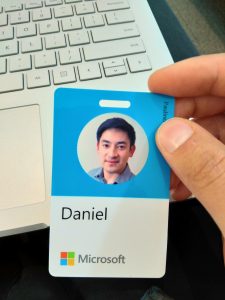 For anyone looking to make a similar switch, Daniel says, “Keep in touch with your network. In the long run, this can open up new opportunities when it’s time. Just learning from your network also helps you grow.” Ultimately, Daniel ended up working at Microsoft as a Software Engineer. While many of his friends assumed that working at Microsoft would be the end of his development efforts after hours, becoming a full-time developer made Daniel even more excited about development. “I continued coding on the bus and the train. The process of coding at work — and then coding at home — doubled my learning speed,” Daniel says. The skills he was learning at work made the apps he developed at home much better. In turn, that practice made him better at work.

Throughout his career, Daniel keeps coming back to empowering others. “When I discovered software, I realized I was creative. My outlet was code,” he says. Once he had this outlet, he wanted to use it to help other people. Amid the pandemic, Daniel created Ambie, a white noise app designed to help you focus, sleep or meditate. “What drives me is channeling my creativity to help someone, whether that’s to get something done with Nightingale or help them improve their health,” Daniel says. “Developers have a unique opportunity to build something in their apartment that can affect a lot of people around the world. I just want to keep growing and helping more and more people that way.”

Awesome journey Daniel, mobile developers are in higher demand as of now. These are among the highest-paying tech jobs in current times. As a "mobile app development firm" owner, I know very well that Mobile developers have to understand user needs in order to create applications they want to use. They have to write clean code to create applications that are user-friendly. They have to think creatively about how users incorporate their mobile devices into their lives, and then build applications that help them complete various tasks.