I'd like to know if anyone has any ideas about this problem?

Microsoft Community Contributor
I've already done pretty much everything I can think of, and I can't diagnose this. Every thing seems to revolve around this error...

I've even restored an earlier System Image to make sure that something hadn't crept into my system.
I've run every diagnostic I can think of, I'm thinking that the video card itself is failing, but I get no indication from anywhere that the Geforce RTX 2080 card isn't running normally.

DX reports that everything is normal.
Nvidia Control Panel doesn't show any issues.
The computer runs fine unless I stress it with something that caused D3D to hang, and then I get a message something like the one above.
Then the computer freezes, and sometimes I can Ctrl-alt-delete out, and sometimes I have to force shutdown.

Once it crashes it won't boot the video card back up, it will start running the motherboard drivers and appear as a little window on my 34" monitor.
The only way I can get it to start again is to unplug it and let it sit overnight. Then it will work fine until I stress it again.

I can run Conan Exiles in Laptop (low) settings, but it will crash if I raise the graphic settings.
I've found a lot of people online having this problem in 2017, and the company, acknowledging that it was a problem but no answer.

Anyone ever run into this?

What I would really like to know is how can I determine if this is the video card dying of a solvable issue.
You would think that if the video card is failing, I'd get some kind of diagnostic message about it.

It was time, so I ordered a new computer, but it won't be here for a month, and I'd like to get this solved I don't want the new computer to have all the junk in it that this one does.

The new one will have only games video editing and graphics programs, and it will have 32 gigs of ram an i9 processor, and a RTX 3080 video card.

If I have to get a new card for my old computer, it won't be a high-end card, since a new video card can cost $2,000 all by itself. I'll just use a serviceable card and, using it to hold all my old stuff.

Thanks for the help.

have you been installing updates on this system? I would test with the laptop in flight mode to ensure background downloads are taken out of the mix

Microsoft Community Contributor
The thing is that I loaded both older drivers and new drivers, and a System Image from when everything was working, and it didn't change anything. The computer works fine except for the 3D thing, and I can't figure anything else to change.

It may be that as long as I don't try and use the computer for gaming it will continue to work, (that's what the new one will be for) but, it's driving me crazy not being able to fix this!

I've always been able to fix my computer myself, for over 20 years. LOL

Staff member
Premium Supporter
so to be clear,
you rolled your system back to a time that was more or less stable then locked out the internet so microsoft couldn't change your bios settings and tested the Gpu in whatever game worked before but plays up now?

Microsoft Community Contributor
Yes, everything has been reset, and updated, I've tried both ways, and I still get this message.
Nothing is overheating, temps are actually staying quite low, probably because the GPU isn't doing anything.

As long as I don't over stress it, the computer runs fine, the problem seems to be connected to the Unreal Engine that runs most video games now days. And I've found many others people getting the same message, but no real solutions. 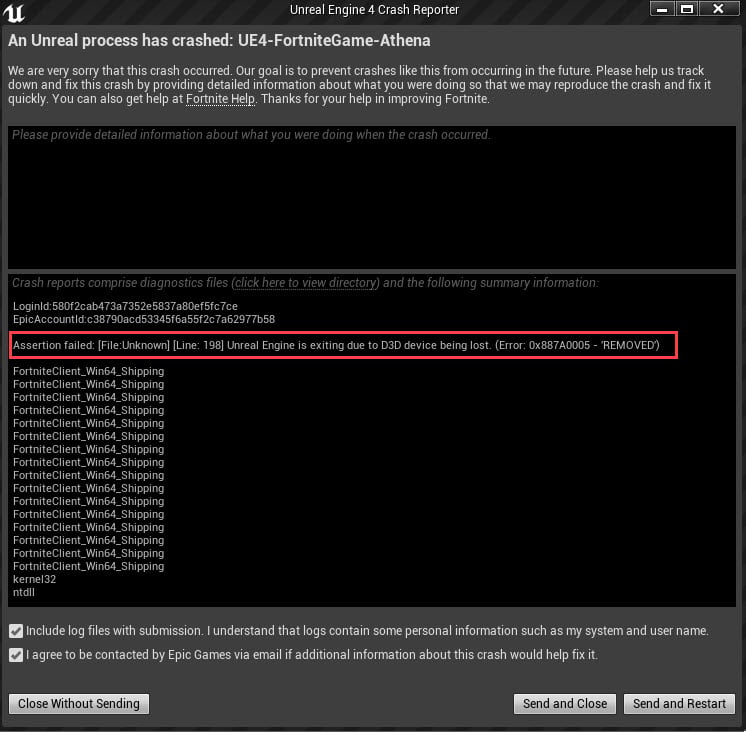 Have you trapped by this pop-up error: Unreal Engine is exiting due to D3D device being lost? This article can help you solve it.
www.drivereasy.com

Some suggestions, like Disable Battery Boost, aren't even available any more.
And I don't have an extra video card lying around to try out, as they cost up around $2,000 now.

It clears out any old bits of driver or corruption and may help?

Use it in safe mode.

Microsoft Community Contributor
I never did get this problem fixed, the computer runs fine unless I try to run a game. I went ahead and got a new computer (I was going to do it anyway) and I'll set the old one up with an inexpensive monitor, so I can access it in case I find I need something off of it, that I forgot to copy.

I'm guessing that it's a problem with the video card, but I don't know for sure.

great that you have a new system Mike... its a fine day when a new toy arrives

Microsoft Community Contributor
Now that I don't have to depend on it, I'll take out the video card, clean everything and put it back in and see if it makes a difference.
It's down in my workroom in the basement now.

Eventually when I figure it out I'll pass it on to someone.
My niece is still using my first Falcon Northwest computer and this is my fourth.
My nephew has the other one.

The hardest thing about setting this one up was lifting it onto the table. This thing is really heavy.

How do I disable Edge in Windows 11.