My Thoughts:
Well we all know the NFS series...and the last few for the PC have been pretty poor examples of how to port a console game in my view...(I'm looking at you ProStreet and Undercover) well now SHIFT has landed what's it offer? The first thing I noticed was how the early tracks all seem to be real licenced tracks, many the same ones used in the excellent "Race Driver 2/3", so straight off they have dumped the chavish street racing thankfully for something a bit more realistic, also Nvidia users will get Physx which has been use to beef up the driving simulation and effects.

If I have a early gameplay gripe it's mainly the sluggish steering which was fixed by a few tweaks to the settings and using a steering wheel instead of joypad or keys and to be honest I simply don't feel as much rush of speed that I'm used to with the frankly faster Codemaster title "GRID", although it does have a decent amount of cars and tracks to mess with lack of Multiplayer (without online via the horribly laggy EA server) is a instant turn off...all PC games should have LAN these days.

It's graphics that still seem a little 2008 grade (no mention of dx10 either) which is okay but hardly gonna set PC market alight...I guess on console it will get huge ratings, but just feels a bit too clean cut and defined. Even when deliberately ramming the car into walls the new damage model seemed a bit light even on most realistic setting, similar bumps in other games would wreck or tear off the wing for example, so it's aimed at the arcade market...which may be a good thing....is it playable? YES, fun?...maybe it will grow on me in time, but with my GRID dvd in range will it get out the pits?

Need for Speed? they got that right....lol cos thats exactly what it hasn't had in numerous titles since the Underground series, the early cars show the expected low speed and lack of thrills but since trying the Lotus cars out I'm satisfied with the whooshing of scenery going past, although the prospect of chavish drift racing is looming down the line in career mode.... I think this should get in the 80% range as it has improved the series after the seriously dreadful Prostreet I lost faith in the NFS brand....this has restored faith although it's sadly playing 2nd fiddle to GRID, a title thats now a year old...and with DIRT2 and dx11 mode due any time now...looks like EA have slipped again.... 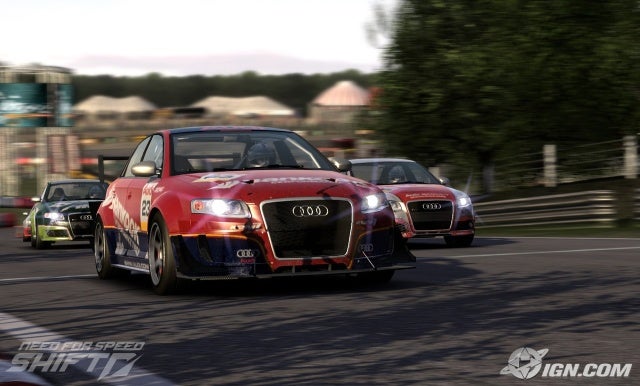 EA says the minimum specs (As always massively below a playable game in my view) are :-

Staff member
Premium Supporter
To be honest Highwayman I was disappointed...
I thought it was a poor clone of Grid but with terrible steering... A real shame as it looked great..

kemical said:
To be honest Highwayman I was disappointed...
I thought it was a poor clone of Grid but with terrible steering... A real shame as it looked great..
Click to expand...

I agree on the steering issue, although soon as I used my steering wheel and disabled all the nanny assist options, rather than using keys/pad things improve greatly...although the early cars steer like ships...lol

Staff member
Premium Supporter
So maybe it's designed more with those wheels in mind?... It's a shame cuz the engine noise is great! So are the graphics..

kemical said:
So maybe it's designed more with those wheels in mind?... It's a shame cuz the engine noise is great! So are the graphics..
Click to expand...

Well took quite a bit of tweaking the deadzones to get it perfect, so will be the same for analgue gamepads too most likely...as the default steering deadzones etc where hideously setup....was like total understeer etc

Staff member
Premium Supporter
I tweaked it a little and it did improve but not enough to warrant keeping it on my pc...
A

I just tried this on Windows 7 64-bit RC and it definitely works fine.. although it does force my computer to turn off after 3 hours of continuous gameplay. Probably a fault on my part playing it on max-res and inadequate heating..

The controlling has definitely changed from other NFS Series games such as MW, Carbon and Undercover.. You'll need better handling skills IMO to survive in the game.. That said, not very addictive.

anyone has had problems with shift? this piece of s... crashes every time i start the first race.. i updated it and nothing.. help?

Staff member
Premium Supporter
Is your graphics driver up to date?