This is the extraordinary place where we all live - the Universe.

The picture is the first full-sky image from Europe's Planck telescope which was sent into space last year to survey the "oldest light" in the cosmos.

It took the 600m-euro observatory just over six months to assemble the map.

It shows what is visible beyond the Earth to instruments that are sensitive to light at very long wavelengths - much longer than what we can sense with our eyes.

Researchers say it is a remarkable dataset that will help them understand better how the Universe came to look the way it does now.

Dominating the foreground are large segments of our Milky Way Galaxy.

The bright horizontal line running the full length of the image is the galaxy's main disc - the plane in which the Sun and the Earth also reside.

This is where most stars in the Milky Way form today; but because this picture records only light at long wavelengths (microwaves to the very far infrared), what we actually see are not stars at all 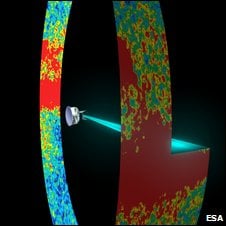 Rather, what we see is the stuff that goes into making stars - lots of dust and gas.

Of particular note are the huge streamers of cold dust that reach thousands of light-years above and below the galactic plane.

"What you see is the structure of our galaxy in gas and dust, which tells us an awful lot about what is going on in the neighbourhood of the Sun; and it tells us a lot about the way galaxies form when we compare this to other galaxies," observed Professor Andrew Jaffe, a Planck team member from Imperial College London, UK.

But as beautiful as the Milky Way appears, its emission must be removed if scientists are to get an even better view of its mottled backdrop, coloured here in magenta and yellow.

This is the famous cosmic microwave background (CMB) radiation, and a key target of the Planck mission.

The CMB is the "first light". It is the light that was finally allowed to move out across space once a post-Big-Bang Universe had cooled sufficiently to permit the formation of hydrogen atoms.

Researchers can detect temperature variations in this ancient heat energy that give them insights into the early structure of the Universe and the blueprint for everything that came afterwards. 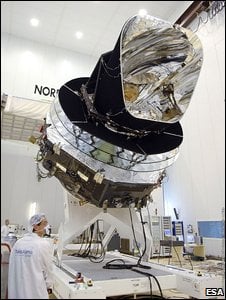 A major quest for Planck is to find firm evidence of "inflation", the faster-than-light expansion that cosmologists believe the Universe experienced in its first, fleeting moments.

Theory predicts this event ought to be "imprinted" in the CMB and its detail should be retrievable with sufficiently sensitive instruments.

Planck is designed to have that capability. Some of its detectors operate at a staggering minus 273.05C - just a tenth of a degree above what scientists term "absolute zero".

Planck is already in the process of assembling a second version of the map. It has funding to acquire at least four versions.

"We know that eventually as the data get better and better, what you end up getting to are the limitations of what you know about the instrument," explained Professor Jaffe.

"And so, by running Planck for longer we can learn a lot more about the instrument itself and thereby remove a lot of the contaminating effects that are just because of the way it produces its noise."

The project team will need a while to analyse all the data and assess its significance. A formal release of fully prepared CMB images and scientific papers is not expected before the end of 2012.

However, such has been the anticipation for Planck data that one or two groups have already tried to make unauthorised interpretations simply from the images released to the media like the one on this page.

But Dr Tauber says this activity is pointless.

"The CMB is certainly visible but the image itself is colour-enhanced so you couldn't do any science with that," he explained.

"We have also reduced the resolution of the image to something which is more manageable for people to look at. Otherwise it would just be too big."

Planck is a flagship mission of Esa. It was launched in May 2009 and moved to an observing position more than a million km from Earth on its "night side".

The truth about CSS selector performance

Shopping for back-to-school PCs? Check out these Windows 11 laptops