News Feed
When small businesses come to RedBit Development, they’re looking for help. They’re trying to figure out the best technology to help them reduce costs, increase profits and develop their missions, which in one recent award-winning example involved redirecting perfectly good food onto hungry people's plates instead of going into a landfill. RedBit – a small business itself with only 17 employees based in Ontario, Canada – responds with big solutions that include custom software, driven by Microsoft technology. Mark Arteaga, who founded RedBit in 2003 and serves as its president, says that a problem he sees with many of his customers is a “mishmash” of ways to share documents, conduct team meetings and handle a multitude of issues as they scale up. Oftentimes, the costs of dealing with that mishmash add up to much more than using a unified ecosystem such as Microsoft Azure, the Microsoft 365 Power Platform and Windows 11 Pro. “We help organizations – whether they’re small businesses, startups or large enterprises, nonprofits or for-profits – leverage technology to help them reach their goals,” says Arteaga, whose business works mostly with companies based in North America. RedBit can tailor solutions to specific situations and needs, with the aim of consolidating and standardizing processes to make them more efficient, including automation. The three main services RedBit focuses on are: building custom applications, modernization (adding mobile services) and cloud adoption. “A lot of organizations we meet are still running servers. Sometimes you need to run a server within your organization, but a lot of companies don't need that server. We migrate them to Microsoft Azure, put them in the cloud, secure and lock them down, so only the team members or the employees can access them,” Arteaga says. “Then they'll be able to continue to do their work.” Hazel Van der Werken, head of operations and customer success at RedBit since 2016, says everything the company does happens in Microsoft Azure. They’re running projects using Azure DevOps, automating pipelines and using some of the Azure Cognitive services. [caption id="attachment_177881" align="alignnone" width="1024"] 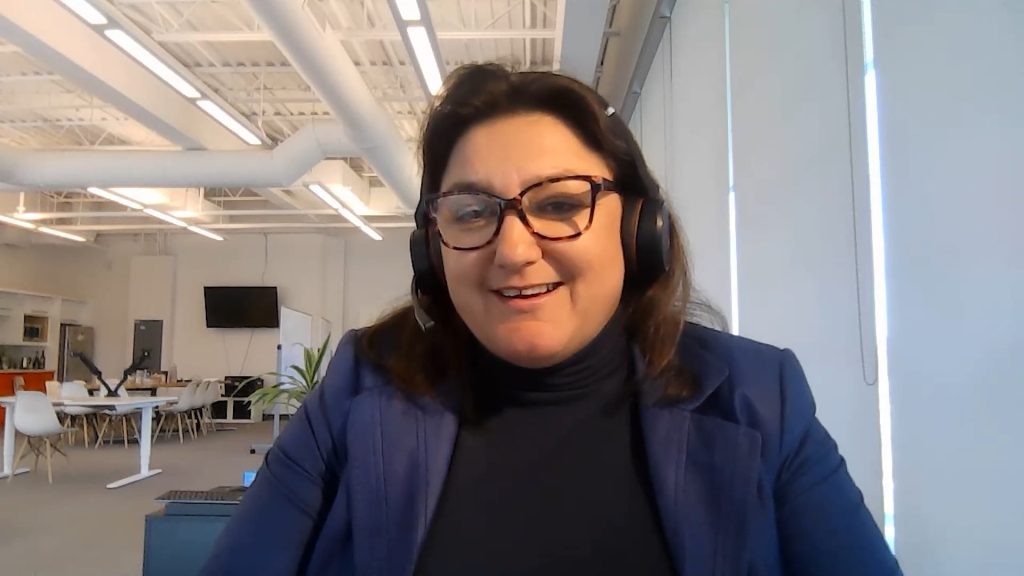 Hazel Van der Werken, head of operations and customer success at RedBit[/caption] Having worked at other software development companies, as well as in the telecommunications and pharmaceuticals industries, Van der Werken has experience with a variety of businesses. “At RedBit we encourage early adoption of technology if the fit is right for them. If the organization has a drive to adopt technology and to be at the forefront, then we absolutely work with them to implement and adopt those new technologies. We have to be cognizant of the culture and what they have,” she says. “If they're a little bit more risk adverse and tend to be a bit more wary about trying something new, we can educate and make them aware of those benefits.” Arteaga has worked with Microsoft tools for more than 24 years, participates in the Windows Insider program and was a Microsoft MVP for 15 years. (This last designation recognizes software developers like Arteaga for mentoring others on how to use technology.) RedBit is also a Microsoft Gold Partner. For RedBit, the entire Microsoft ecosystem is something they say helps them be more productive and efficient as a growing company – especially one that works mostly remotely, as do many of their customers. [caption id="attachment_177889" align="alignnone" width="1024"] 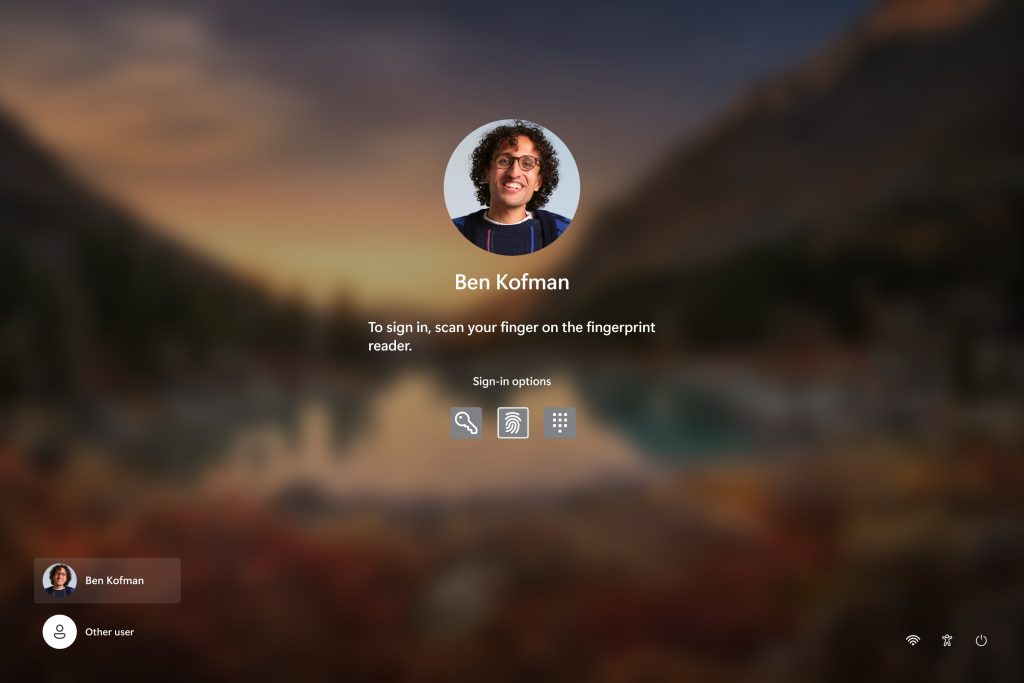 An example of a Windows 11 Hello fingerprint log in screen[/caption] “Once you have that Microsoft 365 account, then you could couple that with Windows because that becomes your organizational ID. You could sign into Windows and then your OneDrive has all your documents, your Teams is there too, and you could connect right away. So just having that deployment from a technical perspective is fairly easy,” he says. “And then from an end user perspective, it's just there once they sign into Windows.” For more non-technical clients, RedBit uses Autopilot, a zero-touch deployment that makes it easy for IT to get Windows devices into the hands of users so they can get up and running quickly and securely. A setup like this, Arteaga says, makes collaborating in real-time that much easier, as one person could open a PowerPoint deck and another person in the organization could edit it simultaneously on their PC, or in their browser. As another example, one thing in its Pro version that he finds indispensable is BitLocker, as a security measure that organizations can manage from a centralized location using Azure.That’s what appeals to me about Microsoft as a business, it's the seamless integration with everything“A lot of small businesses feel that the Microsoft 365 technology stack is not attainable to them or is not within their grasp or their reach," Arteaga says. "But once you take into account all the different third party solutions that most likely they're paying for to do things like document storage, online meetings, anything like that, they can get the same level of technology that Fortune 500 companies get all within the one platform, which I think is easier for a lot of organizations to deploy because there's less training to do for your employees and to manage long term.” Adds Van der Werken, “And when you make work easier for them, when you make it more seamless, it gives them the ability to focus on things that are going to help innovate and grow the company. And that's really rewarding to see. We really come back to that, educating businesses on how technology can help them. That's where the magic happens.” That magic has always been there, but in recent years it’s become even more meaningful. [caption id="attachment_177882" align="alignnone" width="1024"] 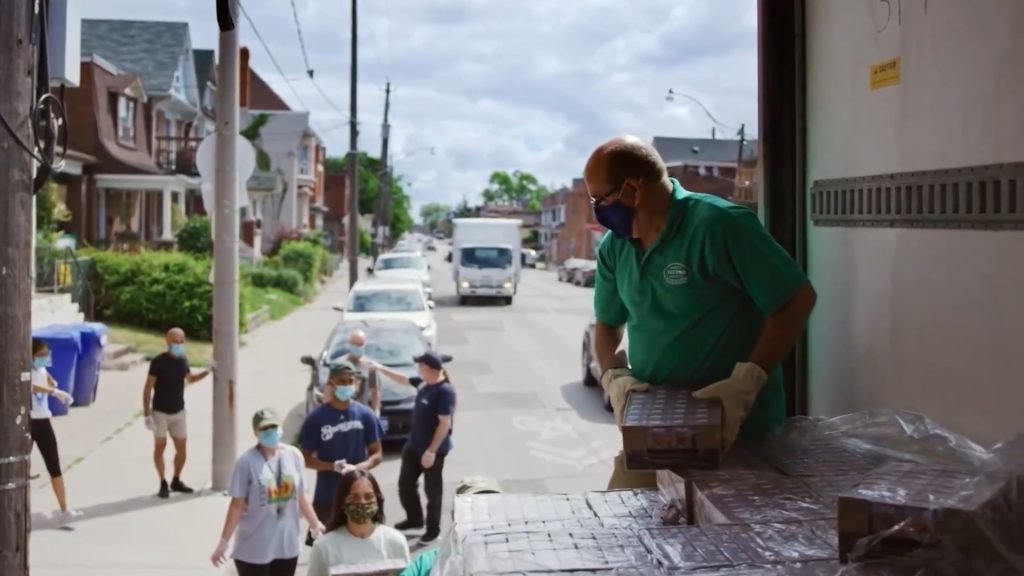 Second Harvest at work[/caption] Second Harvest, Canada’s largest food rescue organization, came to RedBit for help in their mission to combat hunger, which became even more urgent during the pandemic. Using Microsoft 365, Dynamics and Power Platform, RedBit built a solution that matched new donors offering surplus food with agencies that needed food for their clients or communities. “At the height of the pandemic, we worked with Second Harvest to deploy this across Canada. And, in my mind, the only way we were able to do that is because we adopted the Microsoft 365 technology stack and Microsoft Azure. And that allowed us to push the system, scale up the system, and to meet the load and capacity of people claiming food, people donating food,” Arteaga says. “During the pandemic there were a lot of shutdowns, so there was a lot of extra food. So that drove usage of the system, which was good because all that food got distributed. And at the time, I think it was 2 million pounds of food.” Van der Werken says that the pandemic changed the ways companies had to operate, as they needed to pivot to remote and hybrid work. [caption id="attachment_177887" align="alignnone" width="1024"] Hybrid work[/caption] “They want to be able to run their businesses using platforms that will help them and not hinder them. Microsoft products offer all that a small business really could need or want in this regard, which brings me to another pain point we see working with small businesses, is that they tend to have technology in place that is old. There's not much integration across solutions,” says Van der Werken. “Microsoft 365, Teams, Office, Azure, Windows 11 – they all help get our clients up and running on a cohesive platform upon which they can grow and build their businesses.” Van der Werken says that Second Harvest’s accelerated timeline – which went from three years of nationalizing the system across Canada to weeks – was a big challenge for RedBit, but one they took on, conducting a tech overhaul and fast-tracking scalability and performance to address those critical needs. Microsoft recognized the work RedBit did with Second Harvest with a Microsoft Partner of the Year Award for Community Response in 2020. “We're using technology to not only help our customers meet their business goals, but also to leave a positive impact in the world along the way,” she says. “It really gives a lot more motivation and adds to that passion of how you can use technology to create good in the world.” Lead photo: Mark Arteaga, president of RedBit

Spotlight on Windows at Microsoft Ignite and the Technical Takeoff