Sammi the parrot's imitation of smoke alarm drove me mad

An escaped parrot had a mother in a real flap when it spent several days outside her house mimicking her smoke alarm. 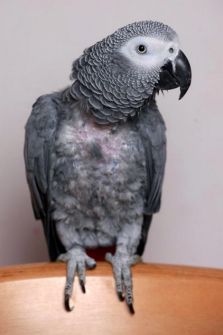 Sammi the African grey congo parrot settled in Shanna Sexton’s garden, then drove her potty by repeatedly whistling in the same pitch as her fire detector.

Ms Sexton said: ‘I’d been hearing this noise for ages. It was really annoying me. I looked around the house, checking everything. I even pulled out the washing machine. In the end, a workman said it sounded like it may be my smoke alarm.’

But the 25-year-old, of Torquay, finally found the source of her irritation perched on a water butt in the back garden.

Sammi’s disappearance had been advertised on posters in the area and he was soon reunited with owner Louise Ledger, 38.

‘Sammi is now home safe and sound and he has not stopped yapping since,’ said Ms Ledger.

‘I am over the moon. When I found out where he was, I could not have got there any faster.’

More Sammi the parrot's imitation of smoke alarm drove me mad
You must log in or register to reply here.

The Cost Of Really Stupid Thought's