Stag goes for swim in the sea, confuses onlookers

Scotland has long been famed for the Loch Ness monster, but now Cornwall has its own water creature to boast about. 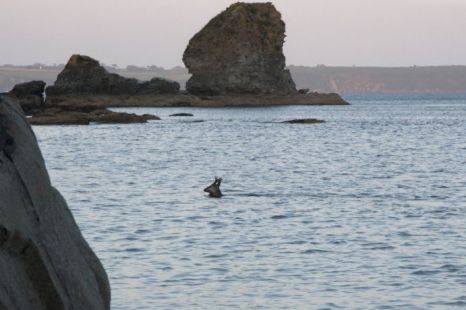 A man out with a group of friends this weekend spotted a stag swimming in the Duporth Bay, near St Austell, and whipped out his camera to take a snap.

Rich Brown admitted at first he was unsure what the animal was, telling The Daily Mail: 'It looked odd - like the creature from the deep.'

But once he managed to focus in on the animal with his camera it became clear it was a stag, although why it was swimming in the sea is still unclear.

'It was way out - I'd say about 300 metres out. I've no idea how it got there but it was being followed by a flock of seagulls that were flying low over it,' he added.

After swimming across the water, the deer then simply return to shore and shook itself off, before continuing along the bay.

The biggest stag in the UK is the Exmoor Emperor, which is a huge 9ft red deer.

Late last year it was feared that the animal had been killed by hunters, after witnesses said they saw the body of a stag in the area after hearing shots.

But locals have since said they have seen the Exmoor Emperor and he is alive and well.

More Stag goes for swim in the sea, confuses onlookers

Sex and the Faction

New photo of 'English Nessie' hailed as best yet

The Myth of the Ethical Hacker

5 Things Capable of Crawling Up Your Toilet