The problem with having the battery at 100% is that it ages WAY faster than if it is kept at 80% or (ideally) 40%.
The battery of my Alienware notebook was almost useless after 2 years and completely dead a few months after.
If it had been possible to keep it at 80% or below, it would have lasted years longer.
T

lm5 said:
The problem with having the battery at 100% is that it ages WAY faster than if it is kept at 80% or (ideally) 40%.
The battery of my Alienware notebook was almost useless after 2 years and completely dead a few months after.
If it had been possible to keep it at 80% or below, it would have lasted years longer.
Click to expand...

That is correct. It also holds true to new phones with non removable battery.

ok, this prompted an experiment from me

given that I didn't know much about batteries at all, I looked some things up. so Lithium Ion batteries don't have battery memory like Ni-Cad, but I downloaded a program called BattCursor, which gave me some information I didn't know existed

over the course of about 10 days, constantly plugged in, I got these readings, per day

so lets say that's losing on average, about 50mW per day

that's losing about 0.1% of the battery capacity, every single day

so we'd be talking a knackered (stuffed/bodged/name of choice) battery after about 3 years, if constantly plugged in, and assuming the degradation continues at 50mW per day. which it may not.

once it got to under 40,000 mW, I chickened out and decided to try unplugging it - for all I knew discharging to 40% might lessen the total rated charge. on the first unplug, BattCurser capacity went straight back to 40604 - so it recovered from a minor dip of the 40604.

this battery was an ebay "similar" model, my original genuine Fujitsu battery that windows was telling me to "consider replacing", had been constantly plugged into the mains with almost no removal, for probably 5 years.

so this "auto switch off at 98%, auto switch on at 40%" could really be a useful utility/capability.

what I've actually done? I bought an inline switch off ebay, chopped my laptops 12v adapter cable, and I've put the switch inline, so once or twice per week, I flip the switch for ~60 mins, and let it get to 40% or so. (this means that I wont eventually wear out the kettle lead socket from physically unplugging it once or twice a week)
T

I use a phone app called AccuBattery. The app works fine. 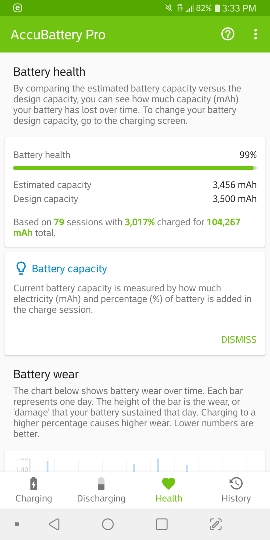 unless you're using Windows?
T

quartz said:
unless you're using Windows?
Click to expand...

For Windows, l use the software that came with my Lenovo laptop. It's called the Lenovo Vantage Toolbar.

Anyway, this goal doesn't seem to be easy to achieve without support form the vendor. omegle
Last edited: Sep 7, 2020
D

to prolong battery life I would like a tool, program, way to have my laptop stop charging, when the battery is at 80% (or more?!) of its capacity. To then wait for it to drop to 40% and only then start charging again. This obviously can only be a temporary tweak (e.g. when the laptop is plugged in overnight) as I would need the notebook to be (almost) fully charged at times.

What model is your laptop?

Sent from my motorola one 5G ace using Tapatalk

Terost said:
What model is your laptop?

Sent from my motorola one 5G ace using Tapatalk
Click to expand...

I think I was already using my Lenovo y50-70 at the time, but I've been running on Linux for ages now, so I'm not really following this thread anymore; I just get the email notifications

Achieve more: Here are the best Windows devices to power your small business