What do we know about the Deepwater Horizon disaster? 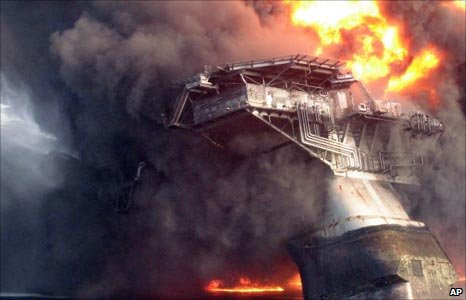 The Deepwater Horizon rig disaster caused the deaths of 11 crew and a massive oil spill in the Gulf of Mexico.

Since the 20 April catastrophe there has been much discussion in US Congressional hearings and the media about the sequence of events that led up to it.

Here is a summary of what we know so far about the BP oil spill, and the primary questions that are still being investigated.

BACKGROUND
The Deepwater Horizon rig was drilling an oil well in the Macondo prospect that was intended to be plugged with cement and then completed later to become a production well.

The Deepwater Horizon was owned and mostly staffed by employees of exploration firm Transocean, under contract to BP.

THE NATURE OF THE WELL
Underwater oil wells are not just holes with a drilling pipe stuck into them. As the drilling is done, a fluid, usually mud is forced out of the drill bit and debris is thus pushed upwards.

This fluid also counteracts the pressure to stop oil and gas forcing their way upwards.

Once each passage of drilling is completed, metal casing is cemented into place in the hole.

In this case the well had already been cemented ready for abandonment. At the point the disaster occurred, the well was essentially finished.

1.Drill, lowered from rig, bores through seabed creating a borehole for sections of casing pipe to be lowered into
2.Casing pipe is lowered into borehole allowing cement to be pumped down the pipe to fix it in place
3.Once the cement is set and secure another stage of drilling begins


CASING AND CEMENT
The first of the two catastrophic problems was in the well itself.

In his evidence to a Congressional committee on 19 May, Transocean chief executive Steve Newman noted that the well was "essentially complete" with drilling having finished three days before the disaster on 17 April.

He said: "The one thing we do know is that on the evening of 20 April, there was a sudden catastrophic failure of the casing, the cement or both. Without a failure of one of those elements, the explosion could not have occurred."

The cementing job was done by Halliburton to specifications ultimately determined by BP.

CENTRALISERS
Much has been made in Congressional hearings of the number of centralisers used. These devices make sure that the pipe or casing is centralised during cementing, to ensure a good job is done.

In an e-mail, a BP engineer said : "But, who cares, it's done, end of story, will probably be fine and we'll get a good cement job."

CEMENT BOND LOG
Because of the importance of getting a good cement job in the well, one that is bonded both to the casing and to the geological formation in which the well is dug, a series of measurements called a "cement bond log" is usually run.

A sonic scanning device is lowered through the well on a wireline. It checks whether there are imperfections in bonding or other problems in the cement. If there are, more cement can be squeezed into affected sections.

Documents presented to Congress show a team from Schlumberger were called to the rig to be ready to do such work, but that they departed on the morning of the disaster having been told their services were not required.

Other documents suggest the cost saving in not having a "cement bond log" to be about $118,000.

CEMENT ISSUES
Henry Waxman, chairman of the House Energy and Commerce Committee, noted "the failure to circulate potentially gas-bearing drilling muds out of the well". This should have been done before cementing.

This arrangement would have created more barriers to the upward flow of oil and gas, but it would also have been more expensive.

Other cementing issues being investigated by Transocean include the type of nitrogen-foamed cement used, the volume and the time it was allowed to "cure".

WHAT IS A BOP?
Whatever the exact cause of what happened, it is clear there was some sort of gas-kick and blowout resulting in an uncontrolled upward surge of oil and gas flow to the surface.

The blowout preventer (BOP) is supposed to stop this happening. The BOP, the size of a five-storey building, consists of a series of high-pressure valves, designed to prevent such a surge or kick from damaging the drilling operation.

In this particular BOP, built by US firm Cameron to specifications by Transocean, there are five ram-type preventers and two annular preventers, according to Transocean's chief executive.

These devices did not stop the blowout. Nor has it been possible to activate them using remote-operated vehicles.

WHY DID THE BOP FAIL?
Blowout

Two possible scenarios have been discussed. One - suggested by Transocean - is that the kick was so catastrophic it pushed fragments of cement debris through the BOP so fast that it was damaged and could not activate.

The sheer force of what happened is indicated by the fact that cement debris travelled all the way up the 5,000ft of riser and on to the deck of the drilling rig.

The other possibility is that the BOP was faulty in the first place.

There were initial allegations that the batteries in a control pod for the BOP may have been flat. Transocean denies this.

A rig worker has also told the BBC's Panorama programme that a leak had been spotted in one of the BOP's control pods.

The last line of defence in a BOP is usually the blind shear ram. This device, activated hydraulically, uses piston-driven blades to cut the pipe, thus stopping the flow.

Tyrone Benton: 'We saw a leak'
This did not work. One
possible explanation is that the section of pipe it was trying to shear was a section of "tool joint". These joints between the pipes are typically so strong that a blind shear ram cannot deal with them.

Another possibility is that something in the hydraulic mechanism of the blind shear ram had failed.

WHAT HAPPENED NEXT?
With the failure to prevent the blowout, the rig was in danger. Everything happened very quickly, according to Transocean boss Steve Newman's hearing evidence.

"It is also clear that the drill crew had very little, if any, time to react. The initial indications of trouble and the subsequent explosions were almost instantaneous."

The surge of gas that reached the surface ignited. Transocean identified two nearby vessels, the rig's own engines and some equipment as the possible source of the accidental ignition.

Blue Screen of Death amongst issues that plagued Deepwater Horizon