Who Are the Taliban ?

Staff member
Premium Supporter
Who are the Taliban? 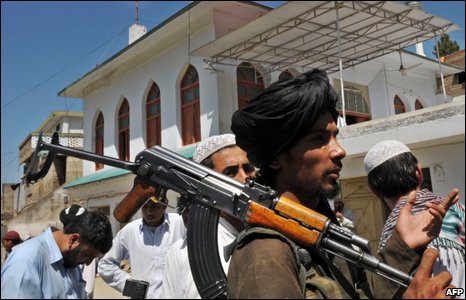 Recent years have seen the re-emergence of the hardline Islamic Taliban movement as a fighting force in Afghanistan and a major threat to its government.

They are also threatening to destabilise Pakistan, where they control areas in the north-west and are blamed for a wave of suicide bombings and other attacks.

The Taliban emerged in the early 1990s in northern Pakistan following the withdrawal of Soviet troops from Afghanistan.

A predominantly Pashtun movement, the Taliban came to prominence in Afghanistan in the autumn of 1994.

It is commonly believed that they first appeared in religious seminaries - mostly paid for by money from Saudi Arabia - which preached a hard line form of Sunni Islam.

The Taliban's promise - in Pashtun areas straddling Pakistan and Afghanistan - was to restore peace and security and enforce their own austere version of Sharia, or Islamic law, once in power.

In both countries they introduced or supported Islamic punishments - such as public executions of convicted murderers and adulterers and amputations of those found guilty of theft.

Men were required to grow beards and women had to wear the all-covering burka.

The Taliban showed a similar disdain for television, music and cinema and disapproved of girls aged 10 and over from going to school. 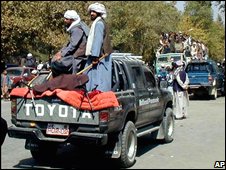 Pakistan has repeatedly denied that it is the architect of the Taliban enterprise.

But there is little doubt that many Afghans who initially joined the movement were educated in madrassas (religious schools) in Pakistan.

Pakistan was also one of only three countries, along with Saudi Arabia and the United Arab Emirates (UAE), which recognised the Taliban when they were in power in Afghanistan from the mid-1990s until 2001.

It was also the last country to break diplomatic ties with the Taliban.

But Pakistan has since adopted a harder line against Taliban militants carrying out attacks on its soil.

The attention of the world was drawn to the Taliban in Afghanistan following the attacks on the World Trade Centre in September 2001. 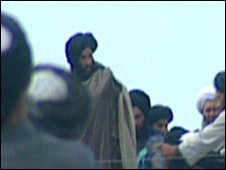 The Taliban in Afghanistan were accused of providing a sanctuary to Osama Bin Laden and the al-Qaeda movement who were blamed for the attacks.

Soon after 9/11 the Taliban were driven from power in Afghanistan by a US-led coalition, although their leader Mullah Mohammad Omar was not captured - and neither was Osama Bin Laden.

In recent years the Taliban have re-emerged in Afghanistan and grown far stronger in Pakistan, where observers say there is loose co-ordination between different Taliban factions and militant groups.

The main Pakistani faction is led by Hakimullah Mehsud, whose Tehrik Taliban Pakistan (TTP) is blamed for dozens of suicide bombings and other attacks.

Observers warn against over-stating the existence of one unified insurgency against the Pakistani state, however.

The Taliban in Afghanistan are still believed to be led by Mullah Omar, a village clergyman who lost his right eye fighting the occupying forces of the Soviet Union in the 1980s.

Afghans, weary of the mujahideen's excesses and infighting after the Soviets were driven out, generally welcomed the Taliban when they first appeared on the scene.

Their early popularity was largely due to their success in stamping out corruption, curbing lawlessness and making the roads and the areas under their control safe for commerce to flourish.

From south-western Afghanistan, the Taliban quickly extended their influence.

They captured the province of Herat, bordering Iran, in September 1995.

Exactly one year later, they captured the Afghan capital, Kabul, after overthrowing the regime of President Burhanuddin Rabbani and his defence minister, Ahmed Shah Masood.

They were accused of various human rights and cultural abuses. One notorious example was in 2001, when the Taliban went ahead with the destruction of the famous Bamiyan Buddha statues in central Afghanistan, despite international outrage.

On October 7, 2001, a US-led military coalition invaded Afghanistan and by the first week of December the Taliban regime had collapsed
Mullah Omar and most of the other senior Taliban leaders, along with Bin Laden and some of his senior al-Qaeda associates, survived the American onslaught.

Mullah Omar and most of his comrades have evaded capture despite one of the largest manhunts in the world and are believed to be guiding the resurgent Taliban.

Since then they have re-grouped in both Pakistan and Afghanistan, but are now under pressure in both countries, from the Pakistani army and Nato respectively.

Despite ever higher numbers of foreign troops, the Taliban have steadily extended their influence, rendering vast tracts of Afghanistan insecure, and violence in the country has returned to levels not seen since 2001.

Their retreat earlier this decade enabled them to limit their human and material losses and return with a vengeance.
BBC News - Who are the Taliban?

Technology in a Changing World