News Feed
Some people consider clothes shopping to be retail therapy. For Charlotte Oxnam, it’s usually been the opposite of a healing experience. “There’s a really common misconception of, ‘Oh, well there's multiple sizes. You can just grab one,’ which hurts even more when none of them are yours,” says Oxnam, 20, a plus-size budding entrepreneur and engineering student in her junior year at Northwestern University. “It's this constant feeling of otherness. Even if you haven't experienced it in clothing, everyone's felt it to some degree: of being the odd man out, being the one not thought about, the one left behind. It felt like no matter what you do – the diets you try, the sports you play, the workouts you do – you don't get to be a part of the rest of the world unless you’re skinny. And that is extremely isolating.” So Oxnam decided to create a solution to that problem: Cue the Curves, an online marketplace that helps plus-size women find clothes that fit their style and size. But more than that, she sees it as a safe space to discuss the emotions and feelings tied with fashion and apparel and help improve self-worth. It started as a blog and will soon add a free mobile app. It's a big leap to transition from a website to an app, something she didn’t realize at first. But Oxnam is grateful she was able to assemble a team of women who have the kind of computer science background needed for such an endeavor. And the influencers and creators who will be available on the app for users to interact with will help defy that feeling of being separate, as they're women who understand what Oxnam has gone through. “It’s a really robust community and a space to be really honest, vulnerable and open. You can get feedback and that communal aspect of shopping that I think a lot of plus-size women feel like they lack,” says Oxnam. “I like to think of it as a conversation around the dinner table: ‘Oh my gosh, I love your top. Where’d you get it?’” In the app, users will sign up with an account, pick styles they love – as well as brands they may already be familiar with – and then Oxnam’s team will create a curated list of apparel they should check out. They’ll be able to read reviews and recommendations from other women on the app, all from a plus-size perspective. “A plus-size woman can enter our space and not feel the need to defend herself, to explain herself. All of a sudden, you’re having constructive and positive conversations. It doesn't feel like you're yelling at a wall, and no one will get it,” says Oxnam, who knows first-hand from social media. “I put out a story about an experience I've had, and I have people responding to me and telling me I'm wrong, telling me that it's my fault, telling me that they haven't gone through that, so there's no way I've gone through it.”She says she struggled with expressing herself “and showing people the me I wanted to be” through clothes, but she couldn’t find anything she loved. But fashion was important to her, as was putting together outfits that evoked emotion. She got deeper on social media and found communities of plus-size women who were wearing whatever they wanted. What made the biggest impression on Oxnam is that they were reframing fashion to align with how the clothes made them feel – which in turn created trends that felt more authentic to plus-size women. “And you could tell from their faces just how good they felt and how excited they were and how confident they were,” Oxnam says. “And I said, I want that. And so I found clothes that made me feel good. And I found that when I was wearing those clothes, I was doing better in school. I was a brighter, better version of me because I felt more authentically me. So, I just kept leaning into it.” Oxnam and her team are almost at the finish line of launching their app at the end of April, and a big part of what’s helping them get there faster is Oxnam switching to a Windows 11 PC a few months ago. [caption id="attachment_177075" align="aligncenter" width="542"] 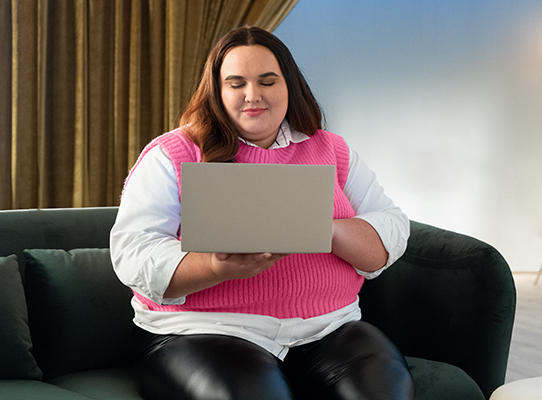 Charlotte Oxnam[/caption] Her work needs are many, and she needed a daily device that could keep up with her busy schedule. Typically, Oxnam is running several programs, such as a wireframe app. She’s projecting company finances on Excel and conducting video meetings on Teams, as Cue the Curves is a completely remote team. She’s running Python code for a course, creating databases and executing experiments. She’s also working on designs for social media content and editing videos for longer form content. That means she needs a lot of processing power at any given time, to be able to run video and coding platforms that she shares live with her team, who are in turn making live revisions online. She’s also working on the creative end too, so she needs to mark up and edit design aspects. And she has to be able to do all of these things simultaneously. “I'm trying to live the life of three people,” jokes Oxnam, who is also part of the 35-member cohort of The Garage, a startup hub at Northwestern, so she’s surrounded by 20-somethings like her who are all working nonstop on schoolwork and their fledgling business ideas. “My core role is a student. I have homework to get done, assignments to do. Then I have to play manager. We have teams abroad. We have students working on Cue the Curves from three different universities. So, I'm managing time zones, meetings and scheduling. On top of that I'm doing a lot of advertising and outreach. So, I'm the CEO, manager, director of marketing and head of development, all in one.” She’s had an entrepreneurial spirit since she was a young child, inspired and consistently supported by a dad who had his own renewable energy business and a very technically proficient mom who worked her way up to be COO of a construction company. “When you're in an early startup, all you have is your credibility. But I don't have a history or proof that I'm worth their time. I can't let anything slip through the cracks,” says Oxnam, so it’s vital her technology keeps up with many important moving parts.The first thing about Windows 11 that stood out to me was how easy it was to set upOxnam says that tech fuels everything she does, but even she was surprised at how dramatically her life changed with a new-to-her operating system. “The first thing about Windows 11 that stood out to me was how easy it was to set up. In five minutes, I had all of my programs set up. I even was able to transfer over all of my tabs and bookmarks and favorite things to Microsoft Edge,” Oxnam says. “This was amazing given how many different platforms I have to log into. To have it ready and customized for me right from the get-go was a game changer. And then beyond that, it was so intuitive to pick up.” She was able to quickly figure out features she now uses daily, such as Snap Assist, multiple desktops, widgets and search from Start. “Everything was super easy to do without having to do a ton of research, which was extremely convenient and meant that I could just get to work right from the beginning,” she says. “I need to be able to quickly export things and get them turned in right before the deadline, because I need every minute.” She marveled at how much easier it was to collaborate in real-time. For example, she constantly works on Excel files with a group of five. It’s usually a massive financial spreadsheet that entails creating new models projected out five years, editing new data and equations. Before she switched to Windows 11, they couldn’t all work on the document at the same time – since statistical models’ numbers change constantly – so they would have to assign people different days to work on it. But that changed once she was using Windows 11. “And all of a sudden, I was on the same document as everyone else working in real time, everything was updating super-fast. I could see the exact numbers that were being plugged in,” she says. “We could comment, we could realize faster ways to do things. We didn't have to fix a ton of people's mistakes.” [caption id="attachment_177076" align="aligncenter" width="540"] 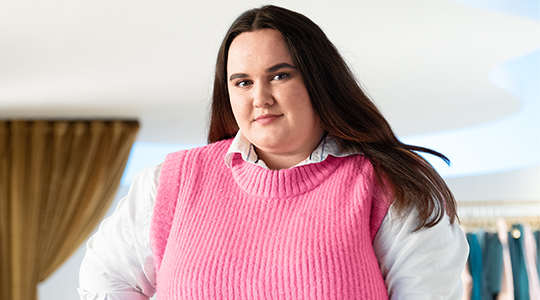 Charlotte Oxnam[/caption] As she’s been able to streamline her workflow, she’s also carrying one less device. Previously she had to go back and forth between a MacBook Air and an iPad. But now, those devices are gathering dust on a shelf while she uses her Windows 11 laptop daily, even converting some of her housemates – mostly engineers – to switch to PCs after seeing how easy it was for her to transfer her work and school life onto the new platform. Having a touch screen on her main device has really simplified her life, she says. “I just tap on the thing I want, and it takes me to it. It's as easy as that. Or zoom in the way we do on our phones,” says Oxnam, who loves how much easier it is to edit images and work on content without thinking about a mouse or even a trackpad. “I just pinch my fingers because that's intuitively what we've learned to do.” Oxnam is hopeful for the future, and how the next generation’s shopping experience will be a much more positive one than what she and others grew up with. The blog will continue to exist, as she wants to make sure the team doesn’t get too insular and turn into an echo chamber. But their focus is to stay true to representing every plus-size woman and advocate for them. To have these spaces exist is already proving valuable to people who have found them. “We've already had at least a couple dozen people directly reach out and tell us, ‘This is the community I've been searching for. This is my space. I've finally found it. Thank you for making it,’” Oxnam says. “Our first step in making the world a more inclusive space is fashion, but I think it's a bigger conversation of how we can create things that are more accessible and enjoyable, that make life better in different ways. And I think technology is at the heart of everything we'll do going forward that can pull that off.” Lead photo: Charlotte Oxnam and a Windows 11 PC