How to differentiate multiple connected process when it return the same parent PID?

Whenever an instance of BlueStacks is opened for the first time, it launches a Bluestacks.exe* that looks like it 'handles' all other futures instances opened: 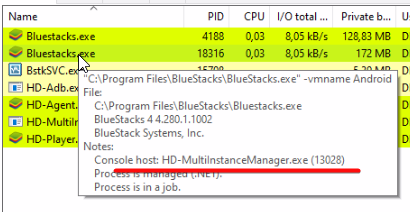 It then launches BlueStacks.exe and HD-Player.exe for each new instance, where each of them is dependent on each other, if you close one the other is also closed.

When I have multiple instances running at the same time I can't figure out what HD-Player.exe belongs to what BlueStacks.exe, when i try to get the parent PID of any of these executables it always points to the PID of the first BlueStacks.exe* opened:

Why do I need to know it?

Is the HD-Player who opens and uses the ports to connect with the android debug (adb).

Then when I need to use the port for a specific instance, I don't know what PID to use to listen to the port as i don't know the HD-Player responsible for it.

Would like to ask for ideas on how I could figure what Player belongs to what BlueStacks.