News Feed
Many new and sought-after Windows APIs and features such as BackgroundTasks, Notifications, LiveTiles, Share and more, are either not available or not easily callable from non-packaged Win32 applications. This is due to the programming model for UWP APIs that integrate with the system and have a dependency on the following concepts:


For packaged applications, Identity declared in the Appxmanifest.xml, and Registration is handled by the MSIX deployment pipeline based on the information in the AppxManifest.xml. This allows a simplified calling pattern for UWP APIs where the application code just uses an API. Compare this to a typical Win32 API that requires a register-use-unregister pattern for managing a callback.

We’ve heard your feedback, and in response we’re filling in the divide between Win32 apps and new Windows APIs & features so that you can take advantage of these new APIs & features and enhance your applications. As of Windows Build 10.0.19000.0 we’re introducing the following new AppModel concepts to provide your Win32 app with deeper integration into the OS:


At their core, these features are about providing a foundation for non-packaged Win32 processes to use our latest APIs and features.

*Please note that these are still new and somewhat advanced development features that do not yet have full Visual Studio integration i.e. there are still some gaps in the end to end authoring experience such as having to create a Sparse Package outside of Visual Studio.


We’ll be using a sample application making use of a Sparse Package to walk through the different aspects of Sparse Package authoring and usage. The demo app is located at microsoft/AppModelSamples

We have a non-packaged WPF application PhotoStoreDemo that stores and displays photos. In its purely non-packaged state, it can be challenging to take advantage of new Windows APIs and features. Our goal is to change this by creating a Sparse Package and continuing to use our previously existing Win32 app artifacts.

Anatomy of a Sparse Package


A Sparse Package must have an AppxManifest.xml and a minimal set of required visual assets in order to deploy.

Let’s use the AppxManifest.xml from our sample code above to look at the anatomy of a Sparse Package.


Firstly, the AppxManifest should declare the <AllowExternalContent> package property. This allows the manifest to reference content that is not located within the package. Any content referenced in the Sparse Package that isn’t located in the package directly should be in the ‘external’ location which is specified when the Sparse Package is registered. For example, if I declare my package’s external location to be Crogram FilesMyDesktopApp during installation or at first run, the image storelogo.png defined for the <Logo> property should be installed at Crogram FilesMyDesktopAppAssetsstorelogo.png and the main application executable PhotoStoreDemo.exe should be installed at Crogram FilesMyDesktopAppPhotoStoreDemo.exe. In addition, the MinVersion should be OS Build 10.0.19000.0 or greater, Sparse packages are currently not supported on OS versions earlier than this.

It’s important to note that unlike a fully packaged application, an app using a Sparse Package + ‘External Location’ is not fully managed by the OS at deployment, runtime and uninstall. As is the case with Win32 apps today, your application is responsible for install and uninstall of all its artifacts including the Sparse Package and any content in the ‘external location’. This also means your app doesn’t receive lifetime management and tamper protection that fully packaged apps receive from being installed in a locked down location on the System.


The newly introduced TrustLevel=mediumIL and RuntimeBehavior=Win32App attributes in the <Application> element are used to declare that the application associated with this Sparse Package will run like a Win32 app, with no registry + filesystem virtualisation and other runtime changes.


The steps required in authoring Sparse Package are:

Once you have your AppxManifest.xml and visual assets, you can use App Packager (MakeAppx.exe) to create a Sparse Package. Because the Sparse package doesn’t contain all the files referenced in the AppxManifest.xml, you need to specify the /nv command.

Here is an example command to create a Sparse Package containing just an AppxManifest.xml from a VS Developer Command Prompt:

You can find more info on App packager (MakeAppx.exe) here.


To successfully install on a machine, your Sparse Package must be signed with a cert that is trusted on that machine. This is the case for regular MSIX packages today. You can create a new self-signed cert for development purposes and sign your Sparse Package using the SignTool available in the Windows SDK and MSIX Toolkit. You can also make use of the newly announced Device Guard Signing feature.
Here’s an example of how to sign a Sparse Package from a VS Developer Command Prompt using the Sign Tool:


To support CreateProcess() scenarios that do not go through the UWP activation pipeline, your app must use the classic Win32-style application.manifest to declare the identity attributes of your application under the new <msix> element. The values defined in the manifest are used determine your application’s identity when its executable is launched and must match those declared in your Sparse Package’s AppxManifest.xml.

applicationId corresponds to the Id attribute in the <Application> element for this app declared in the Sparse package:

To add a classic Win32 manifest to an existing project in Visual studio, from the application node right click | Add | New Item | Visual C# | Application Manifest File. The manifest file naming convention is that it must have the same name as your application’s .exe and have the .manifest extension, in this case I named it “PhotoStoreDemo.exe.manifest”.


As earlier mentioned, creating a Sparse Package for your application makes it easier for your Win32 app to deeply integrate with the OS and take advantage of features such as BackgroundTasks, Share, Notifications and Tiles. Let’s have a look at how our sample app runs and uses the Sparse Package to register as a Share Target and make use of UWP activation.

The workflow in our sample looks something like this:

Example usage – Declaring your app as a Share Target in the Sparse Package AppxManifest.xml


Our sample app is registered as a Share Target by declaring the windows.ShareTarget Application Extension in the Sparse Package AppxManifest.xml:

This is what the code in our app looks like:


And this is the registerSparsePackage method called above handling package registration:

To register the Sparse packages, you need to make use of the PackageManager AddPackageByUriAsync(packageUri, addPackageOptions) API. The API takes in the location of your signed Sparse Package as a URI and an AddPackageOptions object. You need to create an AddpackageOptions object and set the ExternalLocationUri property to the URI of the location where your Win32 artifacts (e.g. app executable) being referenced in the Sparse Package will be installed.


When our app is running, we check whether it was launched under UWP type activation e.g. a Share Event or Notification Event. If it was, we handle the activation event accordingly, otherwise, we handle the launch as a regular .exe launch such as double clicking the app .exe. Here’s a look at the code:


To run the sample app at microsoft/AppModelSamples:


Launching the app with identity: Checking the Details tab in Task Manager shows the app running with a Package Name PhotoStoreDemo which is an indicator that the app is running with our Sparse Package’s declared identity: 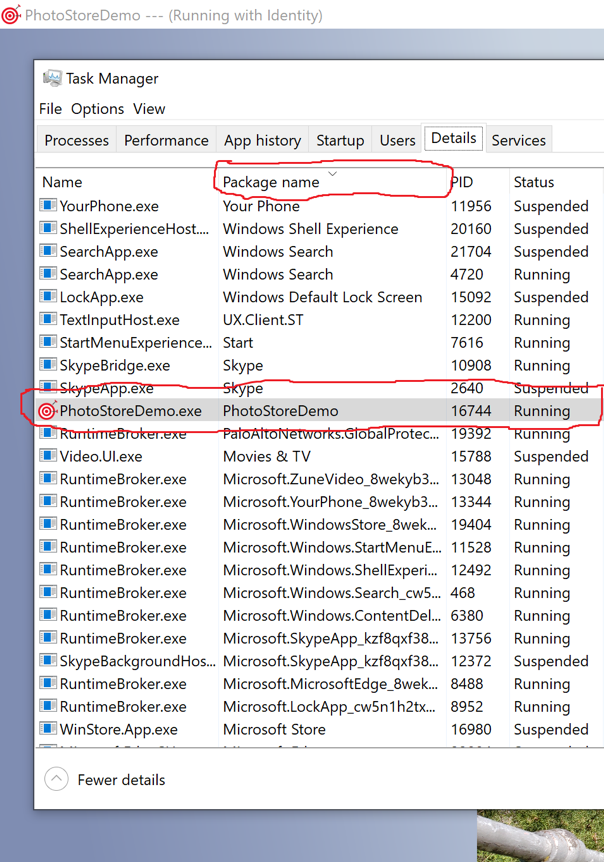 After my app has successfully registered the Sparse package, it shows up as a Share target when I right click on a .jpg/.png/.gif file: 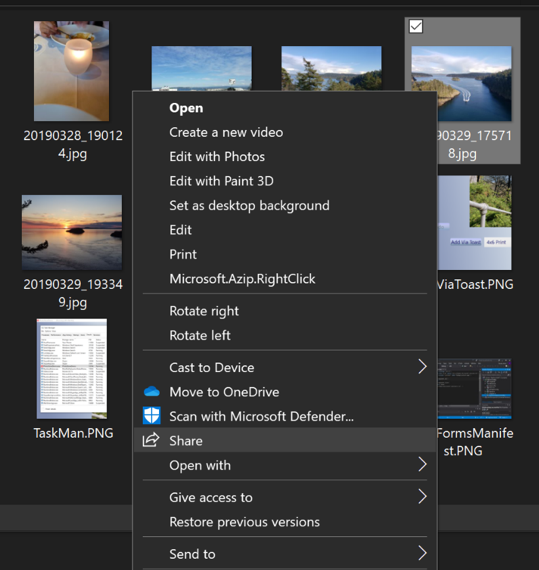 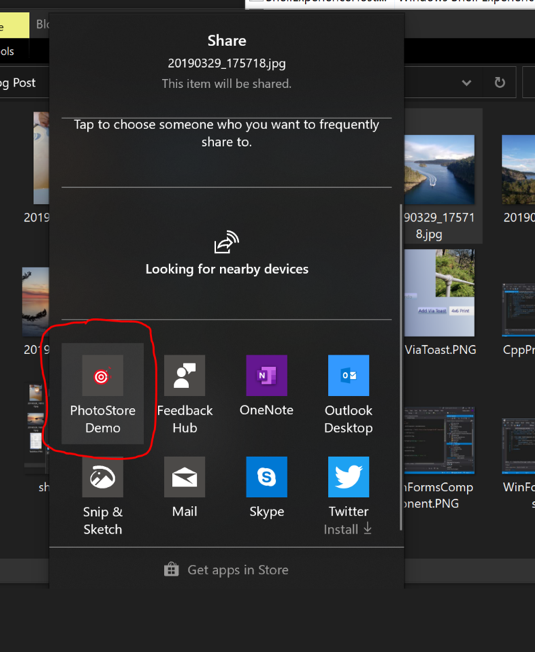 Selecting our app activates the app and adds the new image to the image store. 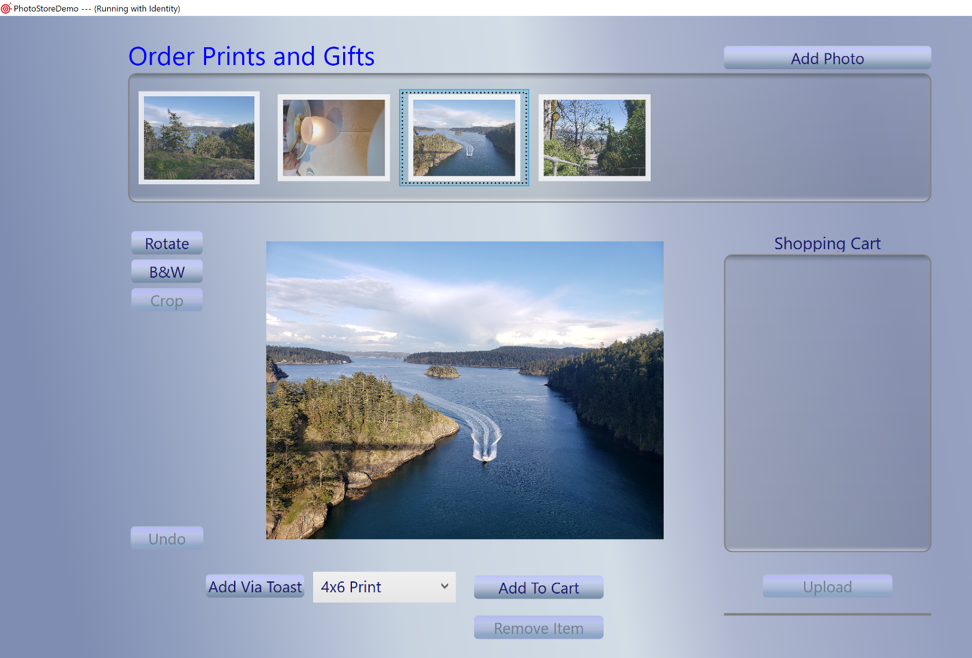 As a bonus, our sample handles toast notification activation in the HandleToastNotification() method in Startup.cs. Clicking the “Add Via Toast” button in the bottom left quadrant of the running app launches a toast message from the app. 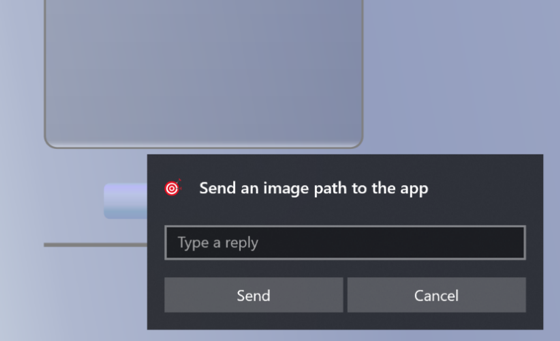 If you enter a full path to an image file, it should add the image file to the app’s photo store. If you close the app before responding to the toast, it will relaunch the app with the new image you specified in the path. 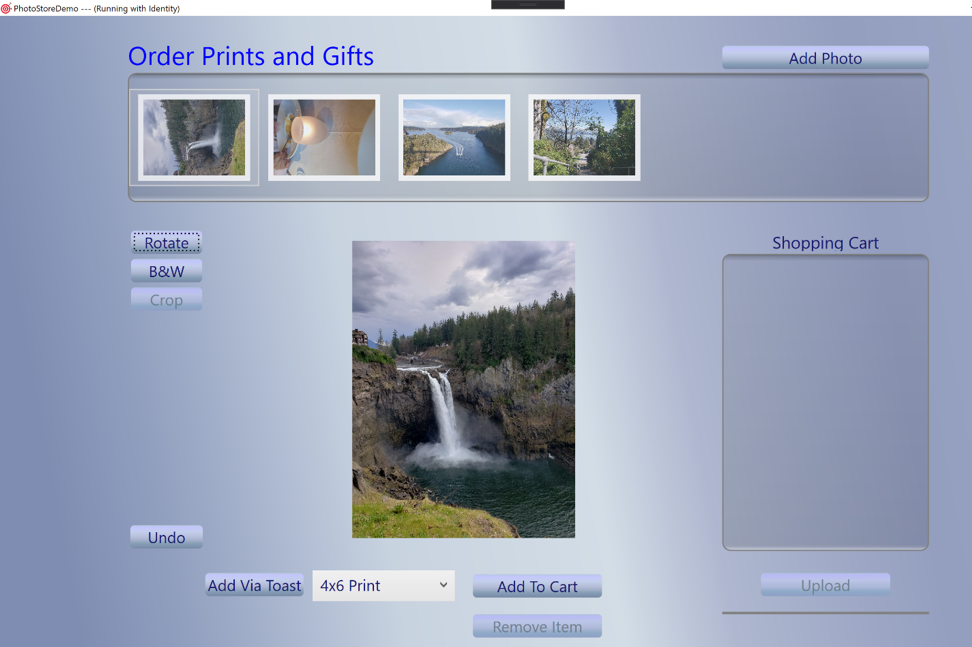 Adding a Sparse Package to your existing Win32 app is a great way to give your application identity and add deeper integration with Windows APIs and features such as Notifications, BackgroundTasks, Live Tiles, Share and more. The main caveats are that unlike for fully packaged applications, your application does not receive tamper protection and installation in a locked down location. In addition, your app is not fully managed by the OS at deployment, runtime and uninstall – your application is responsible for install, lifetime management and uninstall of your Sparse Package, in the same way you are responsible for installing and managing your Win32 app artifacts.

Bring Your AI to Any GPU with DirectML

Bring Your AI to Any GPU with DirectML