Japan nuclear progress as toll up

Electricity has been restored to three reactors at the Japanese nuclear plant wrecked by fire and explosions after the 11 March quake and tsunami.

However the cooling systems are not yet operating, and the UN nuclear watchdog, the IAEA, says the situation remains "very serious".

Some workers at the stricken facility were temporarily evacuated after smoke was seen rising from reactor No 3.

The official death toll from the twin disaster has now risen to 8,450.

Nearly 13,000 people are still missing following the 9.0-magnitude earthquake and tsunami that struck the country's north-east.

Workers have been battling to cool reactors and spent fuel ponds to avoid a large-scale release of radiation.

A plant spokesman says some workers were temporarily evacuated from the complex after grey smoke was seen rising from the No 3 reactor.

Reports said the smoke appeared to have come from a pool where the reactor's spent fuel rods are kept.

Radiation levels did not appear to have risen significantly though after the smoke was spotted, Japan's nuclear safety agency said.


White smoke has been seen rising from the No 2 reactor, the agency said.

"There have been some positive developments in the last 24 hours but overall the situation remains very serious," said Graham Andrew, a senior IAEA official.

The BBC's Chris Hogg in Tokyo says the incident shows how difficult the process to try to stabilise the situation at the site is.


Meanwhile, the government has ordered a halt to some food shipments from four prefectures around the Fukushima nuclear plant, as concern increases about radioactive traces in vegetables and water supplies.

Villagers living near the plant have been told not to drink tap water because of higher levels of radioactive iodine.

The suspension applies to spinach from the prefectures of Fukushima, Ibaraki, Tochigi and Gunma, as well as milk from Fukushima.

Over the weekend spinach and milk produced near the nuclear plant was found to contain levels of radioactive iodine far higher than the legal limits.

However, senior government official Yukio Edano told a news conference that eating or drinking the contaminated food would not pose a health hazard. "I would like you to act calmly," he said.

The World Health Organization said it had no evidence of contaminated food reaching other countries. However, China, Taiwan and South Korea have announced plans to toughen checks of Japanese imports. 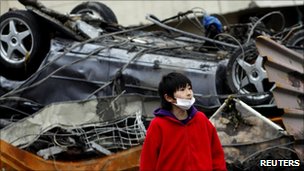 An estimated 500,000 people have been made homeless in the disaster

It is also making the recovery work a much more grim and difficult task.

Search-and-relief efforts in the prefecture of Miyagi, where the police chief believes the final quake-tsunami death toll could reach 15,000, have been delayed by driving rain.

"We have been using helicopters to deliver relief goods to some places but for today we have to switch the delivery to places that we can reach by road," he said.

More than 350,000 people are still living in evacuation centres in northern and eastern Japan.

There are shortages of food, water, fuel and medicine in the shelters, officials say.

Some aid from foreign countries has started to arrive, and the government has started the process of finding temporary housing in other parts of the country for those made homeless.

Nearly 900,000 households are still without water.

In a rare piece of good news, an 80-year-old woman and her grandson were found alive on Sunday in the rubble of their home in Ishinomaki city, where they were trapped for nine days.