A word to the wise doctor: After you perform surgery, please double-check to see if you've left any instruments behind -- say, inside the patient you just operated on.

After a woman, Anne, in Lyon, France, complained of postsurgery abdominal pains, an X-ray revealed a pair of 4-inch-long surgical scissors that somehow had been forgotten and left inside her for five months.

Anne realized something was wrong after a coughing fit when she discovered that the point of the scissors had suddenly pierced her navel. The scissors were finally removed and she's reportedly planning to sue the surgeon. 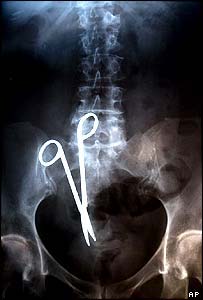 An X-ray shows a pair of surgical scissors in the abdomen of Anne, a woman in Lyon, France, who complained of abdominal pain after surgery. Five months after the operation, Anne realized thel scissors had been forgotten in her womb when the point of the scissors pierced her navel following a coughing fit.


More X-Ray Reveals Scissors Left in Patient's Abdomen
You must log in or register to reply here.