News Feed
At CES 2022, Acer revealed many new Windows 11 devices, including new laptops and All-in-Ones based on the latest Intel 12th Gen Intel Core processors, a special edition gaming notebook and the latest manifestation of the company’s commitment to a more sustainable future. The Swift X lineup adds two new additions, arriving in 14-inch and 16-inch models, arriving in 14-inch and 16-inch models, both running on Windows 11 and featuring a 16:10 aspect-ratio IPS screen with a 92.22% screen-to-body ratio. From there, 100% coverage of the sRGB color gamut delivers an immersive viewing experience. To further enhance these images, it also features Acer BluelightShield for more comfortable viewing, plus Acer ExaColor and Acer Color Intelligence for more vibrant colors. A fan (two on the 16-inch model), air inlet keyboard and dual heat pipes help keep the laptop running cool. [caption id="attachment_176758" align="aligncenter" width="1024"] 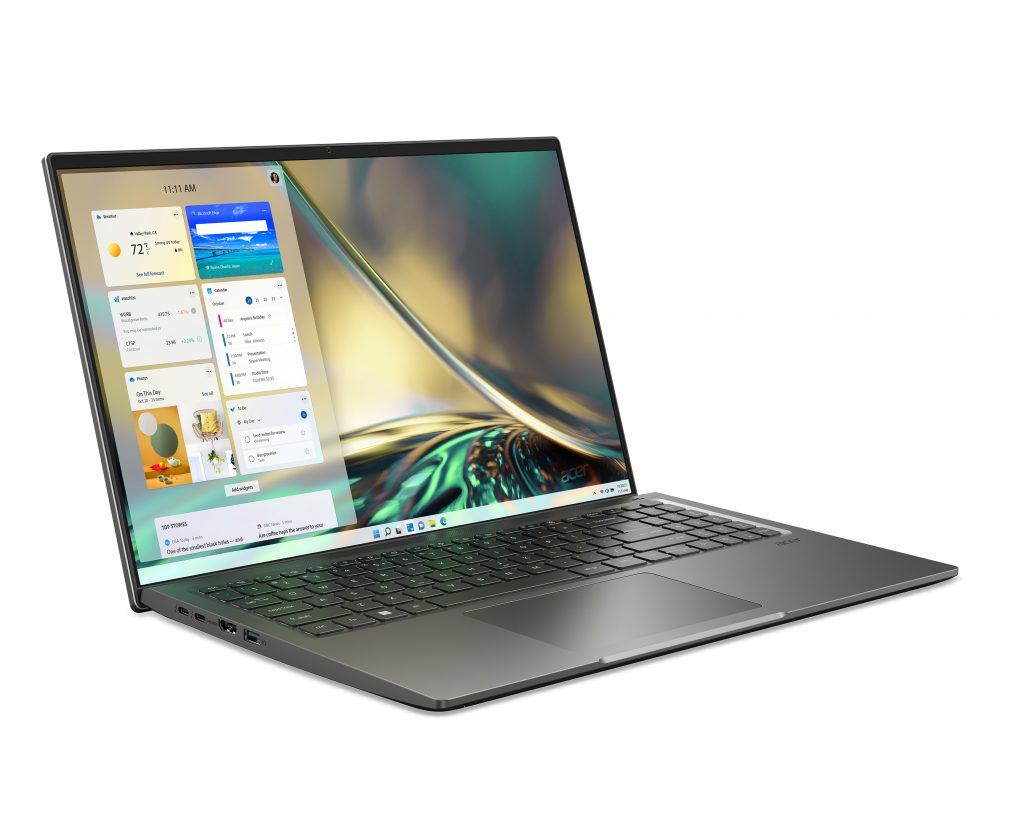 Swift X 16[/caption] Working from home? Consider the new Aspire C27 and C24 All-in-One (AIO) PCs, which have been refreshed with Windows 11 and up to the latest 12th Gen Intel Core i7 processors, the latest NVIDIA GeForce MX550 GPU and 64 GB of DDR4 RAM, plus a 1 TB SSD and 2 TB HDD. Connectivity options back up this powerful hardware, such as Wi-Fi 6E for fast and stable connectivity, Bluetooth 5.2 for simplified data-sharing between devices and Thunderbolt 4 for 40Gbps of bidirectional bandwidth. Video conferencing has never been more important, and the Aspire C27 responds to this need with a 5.0 MP webcam and two stereo microphones. It can also be tilted so users can find the perfect angle for those calls. To help maintain a tidy workspace, this ultra-slim AIO includes space-saving and cable management. [caption id="attachment_176759" align="aligncenter" width="1024"] 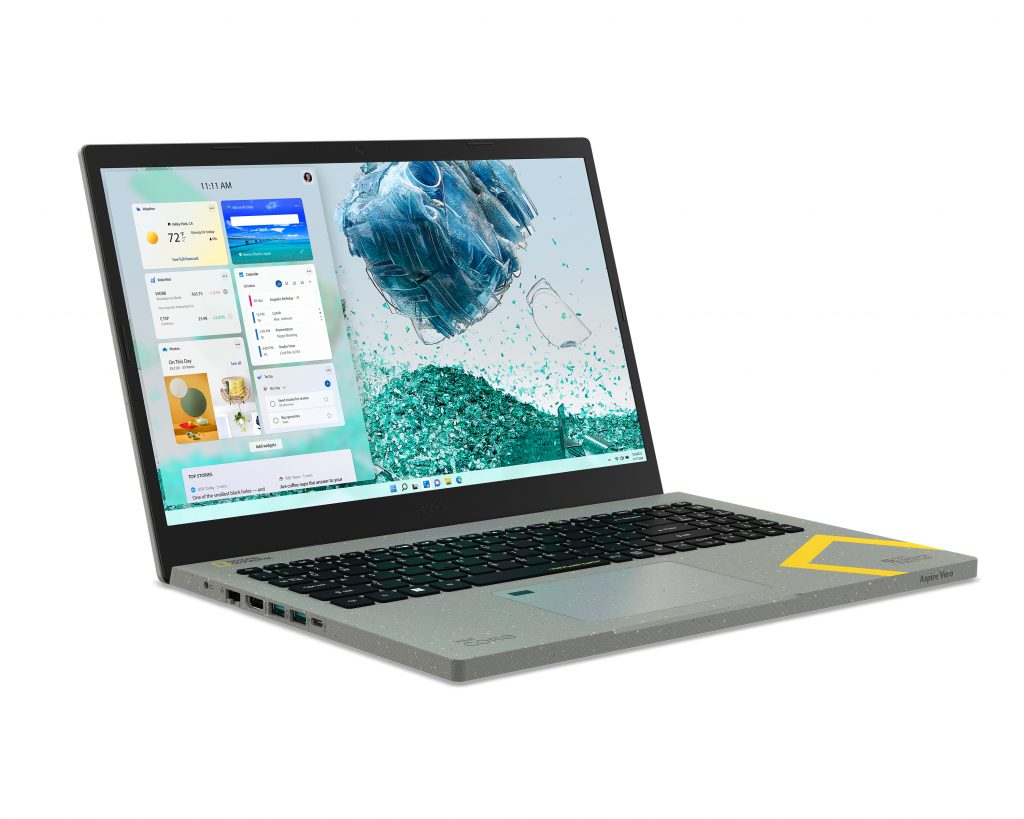 Aspire Vero National Geographic Edition notebook[/caption] For those searching for sustainability-minded devices, Acer has created the Aspire Vero National Geographic Edition notebook. Every purchase of this special edition laptop helps support the global nonprofit National Geographic Society in its work to protect the world through exploration, research and education. The original Aspire Vero’s look is defined by the material blend used in its chassis, which consists of 30% post-consumer recycled (PCR) plastic. Yellow pigment dots contrast with this textured grey surface, adding style without the need for any paint. The Aspire Vero National Geographic Edition builds on this design with several diagonal lines running across approximately half of the top cover. A small extract from a topographic map, these lines divide the laptop’s surface into land and sea and allude to the impact of global warming on rising sea levels. Opening the laptop reveals the National Geographic portal, which has been printed directly onto the bottom right corner of the keyboard. In yellow print on the spacebar lies the message, “For Planet Earth.” Even the laptop’s packaging shows a thoughtful approach, as it’s been designed to be a multipurpose box. And just because it’s got a lighter ecological footprint doesn’t mean it skimps on performance. An 11th Gen Intel Core processor with Intel Iris Xe graphics powers it to comfortably handle productivity and collaboration tasks, while Wi-Fi 6 offers ultra-reliable connectivity. A generous selection of ports includes a USB 3.2 Gen1 Type-A port, which can be used to charge mobile devices even when the computer is turned off. [caption id="attachment_176760" align="aligncenter" width="1024"] 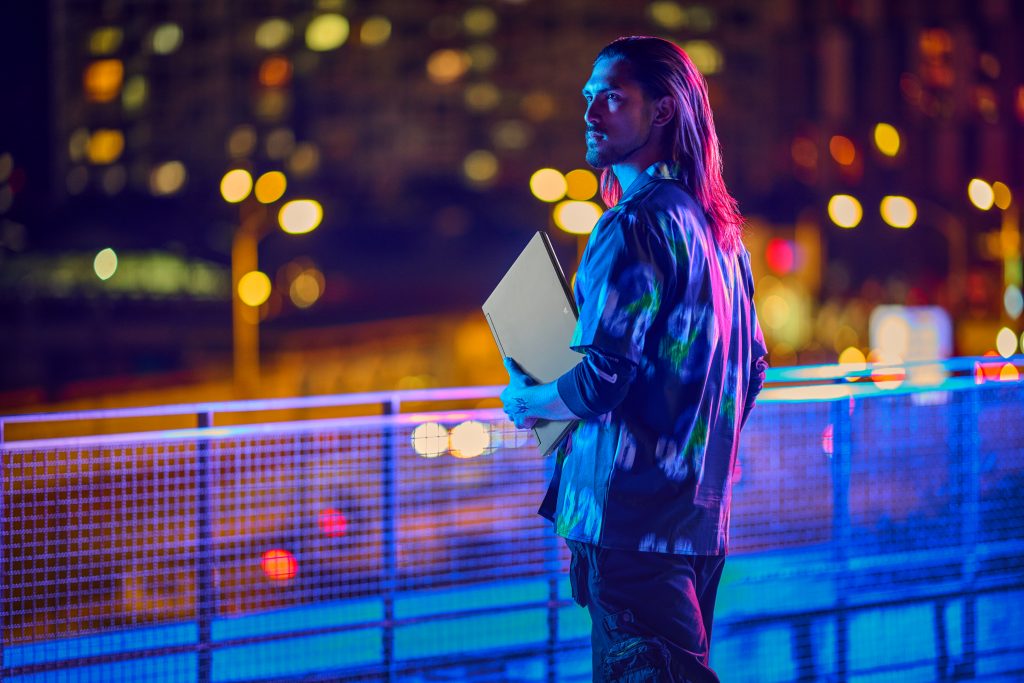 Predator Triton 500 SE[/caption] Acer has also refreshed its gaming laptops, namely its Predator and Nitro lines, starting off the year with new models of the Predator Triton 500 SE, Predator Helios 300 and Acer Nitro 5. All of the laptops feature the latest 12th Gen Intel Core processors and NVIDIA GeForce RTX 30 Series Laptop GPUs, while the Acer Nitro 5 also includes an AMD Ryzen 6000 Series processor option. The Predator Triton 500 SE (PT516-52s) is a “special edition” laptop for work and gaming. It comes with an up to 12th Gen Intel Core i9 processor, an NVIDIA GeForce RTX 3080 Ti Laptop GPU and 32 GB of 5200 MHz LPDDR5 memory to provide the extreme performance necessary for the latest games. Its all-metal Spartan-styled chassis blends into the workplace or lecture hall. Just 0.78 inches at its thinnest point, the laptop is one you can take easily take anywhere, while up to 2 TB of high-speed NVMe RAID0 SSD storage offers plenty of space for games and files. The laptop utilizes a triple-fan system, including two 5th Gen AeroBlade 3D fans with 89 metal blades each. Acer’s Vortex Flow technology redirects the airflow those fans generate to critical components, while strategically placed thermal foam, liquid-metal thermal grease on the CPU and four heat pipes further improve cooling. [caption id="attachment_176761" align="aligncenter" width="1024"] 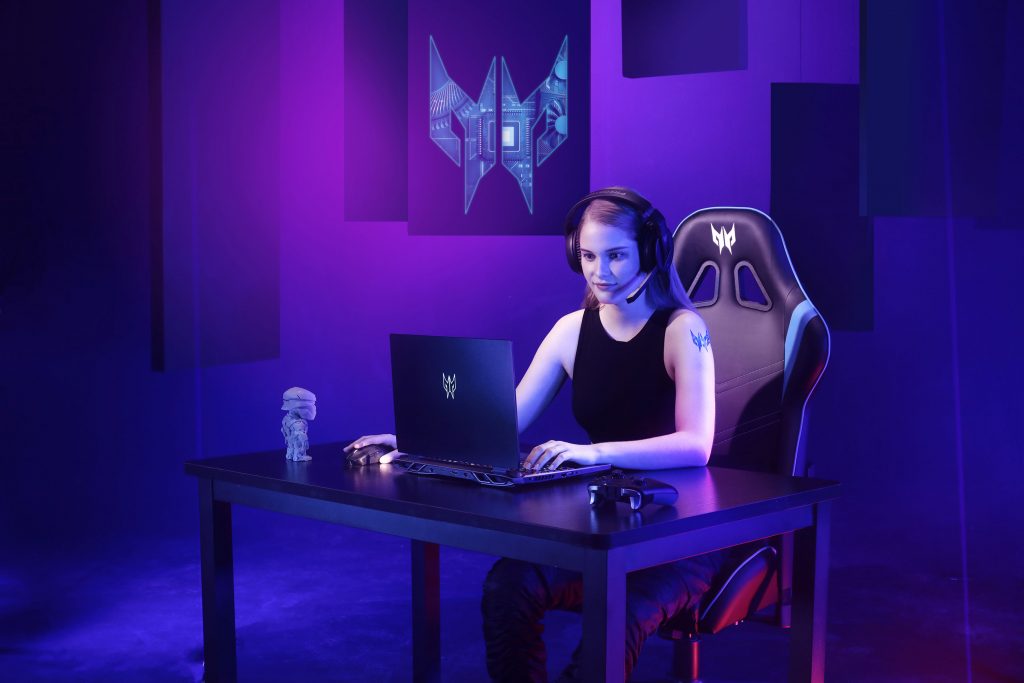 Predator Helios 300[/caption] The Predator Helios 300 (PH315-55) has everything you’re looking for in a powerful gaming laptop, plus a 15.6-inch QHD (2560 x 1440) IPS display with a 165 Hz refresh rate, a cleaner chassis and a light bar. More casual gamers will find a lot more in the Acer Nitro 5, with its 12th Gen Intel Core i7 (AN515-58) and up to an NVIDIA GeForce RTX 3070 Ti GPU. A pair of M.2 SSD slots (PCIe Gen 4) offer massive storage, while up to 32 GB of DDR4 3200 RAM gives players plenty of breathing room to handle multiple applications at once. And with Killer Ethernet E2600 and Intel Killer Wi-Fi 6 AX1650i, players can make their network prioritize game traffic for even faster connectivity when every second counts. There’s also an AMD version. [caption id="attachment_176762" align="aligncenter" width="1024"] 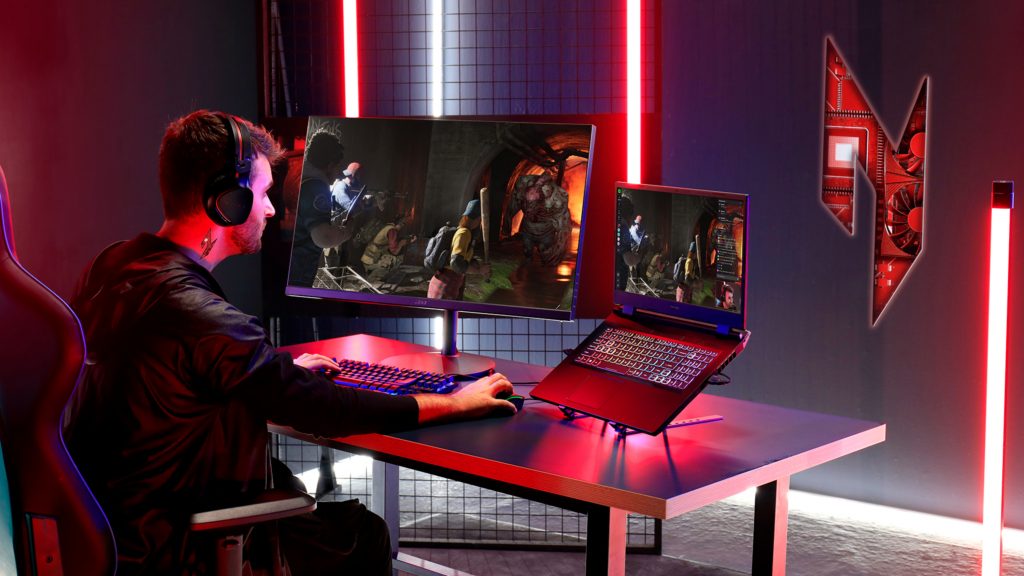 Nitro 5[/caption] Another bit of customization comes with the NitroSense utility app, a built-in software solution that also enables users to overclock their CPU/GPU and customize the four-zone RGB keyboard’s lighting as well as control fan speeds for more or less cooling power. For those who prefer to play in a stationary/fixed setup, Acer has boosted its gaming portfolio with new Windows 11 Predator desktops and monitors. Gamers can expect to check out refreshed and upgradeable Predator Orion 5000 series gaming desktops, new mid-range Predator Orion 3000 series gaming desktops, an OLED Predator monitor and an additional pair of IPS monitors that combine VESA DisplayHDR 1000-level visuals with high refresh rates. The Predator Orion 5000 combines up to the latest 12th Gen Intel Core i7 processor (with the Intel H670 chipset) with a NVIDIA GeForce RTX 3080 GPU in order to deliver high frame rates and satisfying experiences, even in the most graphically demanding games. Alongside 64 GB of 4,000 MHz DDR5 RAM and up to 2 TB of M.2 PCIe 4.0 SSDs, ARGB-infused Predator FrostBlade 2.0 fans support these powerful internals by keeping the system cool. This generation of fans utilizes a static pressure design to optimize airflow, while sealed rifle bearings and a new arc-shaped design along the ends of the fans’ fins reduce vibration and noise. Gamers seeking a mid-tower rig that still delivers a great experience can add the Predator Orion 3000 series to their list of options. With up to a 12th Gen Intel Core i7 processor (on an Intel B660 chipset) and up to a NVIDIA GeForce RTX 3070 GPU, gamers can max settings in their favorite titles and dive into streaming or video editing with little to no impact on performance. Gamers and creators looking for performance and visual brilliance can look at the new Predator X32 – which earned a CES Innovation Award – and Predator X32 FP gaming monitors. Featuring 160 Hz and 165 Hz (overclocked) refresh rates, respectively, both of these UHD (3,840 x 2,160) 32-inch monitors also boast VESA DisplayHDR 1000 certifications, IPS panels that support 576-zone miniLED local dimming, Delta E<2 color accuracy and 99% coverage of the AdobeRGB color gamut. As a result, they deliver clear and fluid visuals that are essential for tracking objects as they zip across the screen. Looking for an alternative to your next TV? The Predator CG48 gaming monitor provides 48 inches of pure 4K enjoyment, even at refresh rates of 138 Hz. The OLED display leverages a 135K:1 contrast ratio, HDR10 and 98% coverage of the DCI-P3 color gamut. One of the distinctive aspects of OLED technology is that pixels are individually powered and can be turned individually on or off, allowing for true blacks to be replicated. (OLED panels create the color black by turning pixels off, meaning that light is not being emitted.) To find out more about these devices and the others in the Acer CES lineup, head over to the Acer pressroom.