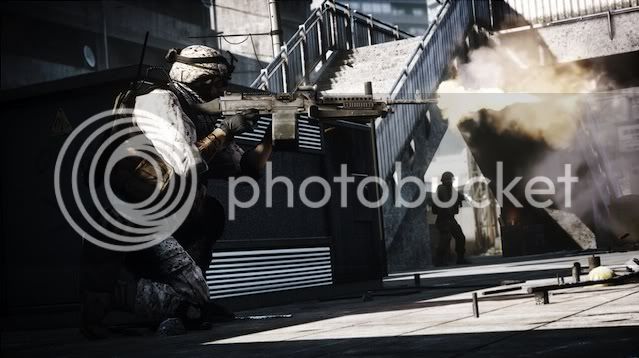 There is a soldier in front of me, and he's running away from a volley of gunshots coming from behind a fence. We're fighting through Paris in the Rush game mode in Battlefield 3, and the way he runs is lifelike. For a moment I'm transfixed as I simply watch him try to avoid death. I'm not sure what happened next—it might have been a grenade—but an explosion rocked a window on the building above him, and large pieces of rubble fell down, barely missing him. It's a single moment of Battlefield 3 multiplayer, but it shows off why this game is so anticipated.

There has been many changes to the Battlefield formula, but so far I'm very happy with the results. Let's jump in.

A combat medic?
You can play as one of four classes in the game, although you can customize and change the loadout of each one. The assault class and medic have been melded into the assault medic class, able to throw health packs to wounded allies while fighting on the front lines. The engineer is still a powerful weapon against vehicles, but he can now also equip a flashlight on his gun, temporarily blinding enemy soldiers in dark environments. The sniper has been given the ability to hold his breath for a few moments to steady his aim. The class I played, however, was the light machine gunner.

The light machine gunner has a powerful weapon that lays down an impressive amount of fire in a short time, and with the bipod attachment you can rest the gun on any solid surface to improve your accuracy. This gives you the ability to create a temporary turret wherever there is a solid surface, and this also allows you to use suppressive fire more accurately. When you lay down supressive fire, anyone caught in it will have slightly blurred vision, making it harder to see and move. If one of your team mates kills an enemy that's suppressed, you gain experience points.

While I didn't have time to explore all these new abilities, suppressive fire was a powerful tool used to keep multiple targets in check, and can even control the movement of the enemy in a limited way. Of course, it also makes you a target for nearby snipers, using their new ability to hold their breath before sending your brains flying through the back of your head.

Each weapon will have three slots for you to add unlocked upgrades as you play, and even vehicles will be customized with extra guns or options. We'll likely learn more about these options later, but it's clear you'll have much control over your loadout, allowing you to adjust your equipment to the style of your play.

The flow of battle
It's hard to describe what it's like playing Battlefield 3 with the power the Frostbite 2 engine adds to the game. Structures can be taken down, explosions are more realistic, and the animations of the soldiers on both sides are uncanny. One significant advantage that DICE often talks about is the ability of the engine to render large outdoor battles as well as fighting in tight quarters


This became apparent as my team fought through its objectives, finding ourselves underground in a small tunnel. The enemy was waiting for us, and a bloody, close-quarters firefight broke out, spilling into a nearby subway. Cover was at a premium, grenades were used extensively, and finally we broke through to another large, outdoor arena. Levels can now have rhythm, with both large areas and tighter sections, and it changes the character of the game for the better. This is the place where the flashlights will be effective, blinding the enemy and keeping them at bay.

The game has exceeded my expectations in terms of presentation and mechanics; the battles are intense and almost scary in how much destruction can take place around you. There is much we don't know about the game, and we still have yet to see it on the consoles—at E3 I played the game on a tricked-out PC—but it feels great to get a taste of the multiplayer game and walk away so satisfied. The game is moving in the right direction, and offers enough updates and change to feel fresh.

This is what a modern war game should be, and this is how it should look. Also, this is where it should live: on the PC.

This game had 31 nominations and won "Best FPS 2011" straight-up at E3 earlier this week.

I absolutely can not wait for it to hit this fall (October 25th). Here's a round-up of all the videos so far:


I wonder if highwayman will see this, I know he's into Battlefield. Is anyone else?
Last edited by a moderator: Jul 26, 2013