News Feed
Content is at the heart of the Windows PC experience – from the apps that fuel productivity, to movies that transport and games that connect. Our passion for helping developers more easily bring their apps to customers inspired us to redesign the Microsoft Store on Windows. We also embraced a new set of Open App Store Principles that welcomes all developers to bring the best apps and games to your Windows 11 device, from apps using their own commerce to third-party storefronts. We are energized by the response and feedback from our community that show us these changes have made an impact. The past 12 months have been a record year, with over 900 million unique users worldwide utilizing the Microsoft Store, and a 122% year-over-year increase in developer submissions of new apps and games. Today, we are excited to share updates on the Microsoft Store Ads pilot for developers, expansion of the Amazon Appstore in international markets and great new content for your Windows 11 devices. 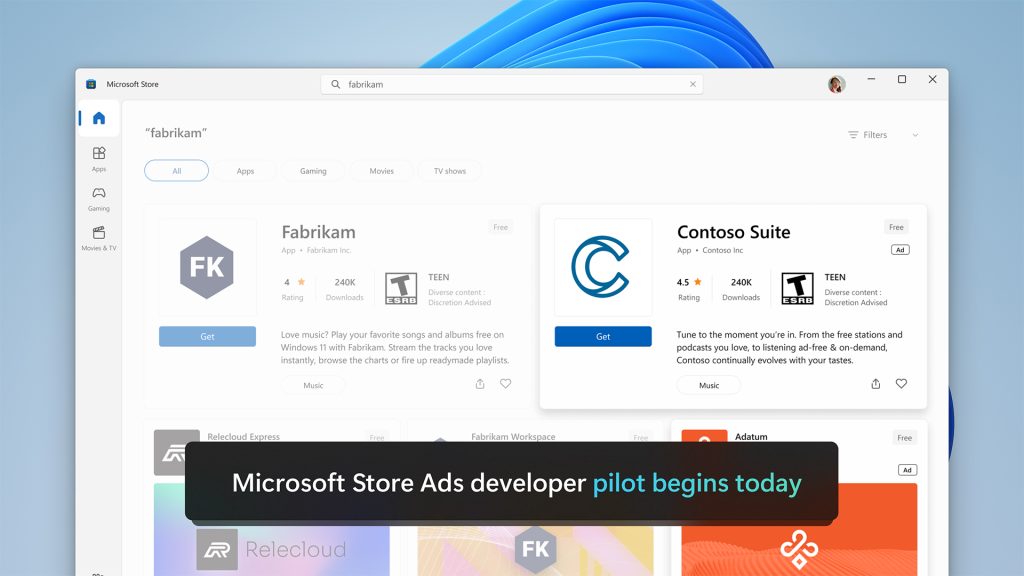 Since introducing our partnership with Amazon, we have heard a lot of interest from customers and developers around the world to expand the catalog and the list of markets supported. Today, we are excited to share that within the next few weeks, the Amazon Appstore will expand to 31 countries – including Australia, Canada, France, Germany, Italy, Japan, Spain, United Kingdom, United States and more. Windows 11 users in those countries will be able to enjoy more than 20,000 Android apps and games, including popular mobile games Coin Master, Epic Seven, Machington Mansion, along with family and kids favorites such as Disney Coloring World, KidsBeeTV, Lego Duplo World, and apps like Kindle, Audible, FlipaClip, Lutron to name a few*. To get started, simply head to the Microsoft Store on Windows app. We made it even simpler to discover Android apps and games. Like any other content, you will now find them in editorials and search results, you will see them in inline ratings and reviews, and you will be able to share a link to your favorite app with your friends. The Windows Subsystem for Android™ (WSA) continues to get better each month thanks to developer feedback. In the latest release, you will enjoy 2-3 times faster graphic performance with hardware acceleration, DRM video support, improved input handling across touch, mouse and keyboard, and several network and security improvements. Developers can sign up here to learn more about bringing Android apps and games to Windows 11. 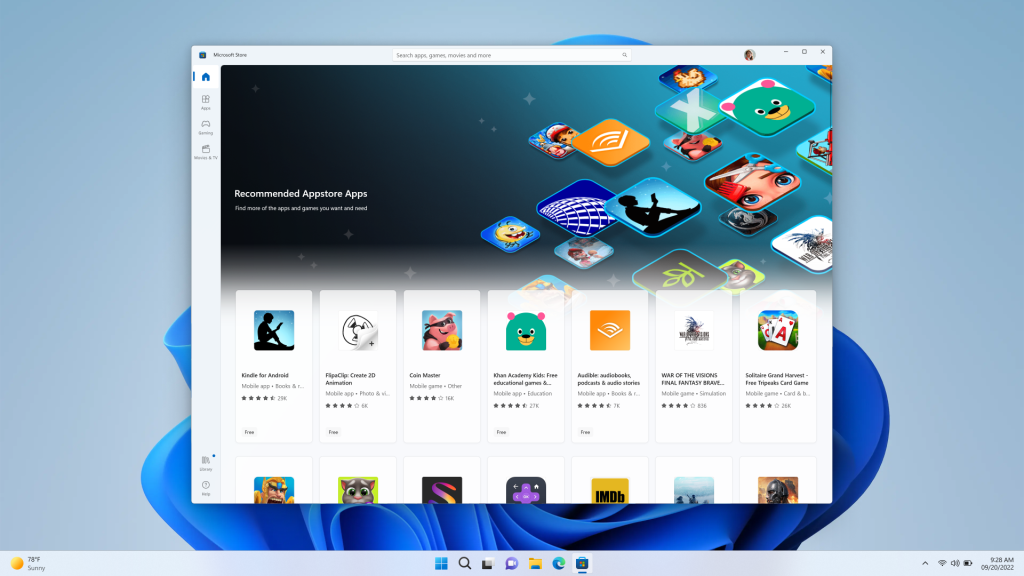 With 90% of the most used apps on Windows distributed through Microsoft Store, there is now even more great content available for everyone to work, play and learn.

More apps, games and entertainment in the Microsoft Store on Windows​

There are many other updates coming in October to Microsoft Store with the latest version of Windows 11. Customers will have a new search experience inclusive of screenshot previews in Microsoft Store and Windows Search, and users will be able to easily restore their apps when transitioning to a new Windows 11 device. Developers of Win32 apps will see improvements in the multi-language submission experience, certification reports, rating and review reports, the post-install experience, and more. Learn more about publishing your apps to Microsoft Store. And that’s just the start. We are inspired by our customers and developers and appreciate their continued feedback. We look forward to delivering even more experiences that empower you to do more of what you love. *Hardware dependent: See Windows 11 Specs and System Requirements | Microsoft. **Content may not be available in all territories. Blackout and other restrictions may apply.