The most expensive public enemy in American history died Sunday from two bullets.

As we mark Osama bin Laden's death, what's striking is how much he cost our nation—and how little we've gained from our fight against him. By conservative estimates, bin Laden cost the United States at least $3 trillion over the past 15 years, counting the disruptions he wrought on the domestic economy, the wars and heightened security triggered by the terrorist attacks he engineered, and the direct efforts to hunt him down.

What do we have to show for that tab? Two wars that continue to occupy 150,000 troops and tie up a quarter of our defense budget; a bloated homeland-security apparatus that has at times pushed the bounds of civil liberty; soaring oil prices partially attributable to the global war on bin Laden's terrorist network; and a chunk of our mounting national debt, which threatens to hobble the economy unless lawmakers compromise on an unprecedented deficit-reduction deal.

All of that has not given us, at least not yet, anything close to the social or economic advancements produced by the battles against America's costliest past enemies. Defeating the Confederate army brought the end of slavery and a wave of standardization—in railroad gauges and shoe sizes, for example—that paved the way for a truly national economy. Vanquishing Adolf Hitler ended the Great Depression and ushered in a period of booming prosperity and hegemony. Even the massive military escalation that marked the Cold War standoff against Joseph Stalin and his Russian successors produced landmark technological breakthroughs that revolutionized the economy.

More Link Removed due to 404 Error

Giving Thanks
Thanking Obama for killing Bin Laden is like going into McDonald's and thanking Ronald McDonald for the hamburger. It's the guy cooking the burger that should get the credit, not the Clown!!!

I would have given my thumbs up to whatever more efforts and expenses it took to destroy Osama bin Laden, but don't you think that 15 years and $3 trillion was somewhat ineffective to find a terrorist who hadn't even changed compounds, living in the same place all this time ?

I suppose it didnt help that Pakistan were caught out playing for both teams, hope they get a lot of crap over this.

How bin Laden emailed without being detected by US


WASHINGTON – Despite having no Internet access in his hideout, Osama bin Laden was a prolific email writer who built a painstaking system that kept him one step ahead of the U.S. government’s best eavesdroppers.

Bin Laden’s system was built on discipline and trust. But it also left behind an extensive archive of email exchanges for the U.S. to scour. The trove of electronic records pulled out of his compound after he was killed last week is revealing thousands of messages and potentially hundreds of email addresses, the AP has learned.

Holed up in his walled compound in northeast Pakistan with no phone or Internet capabilities, bin Laden would type a message on his computer without an Internet connection, then save it using a thumb-sized flash drive. He then passed the flash drive to a trusted courier, who would head for a distant Internet cafe.

I actually thought that Bin Laden died of a cancer related brain disease and Seve Ballesteros was assassinated by the Navy Seals. I must buy more newspapers when I'm "away".

Though the worst news was:

guessing from the literal thumb drive that maybe the courier must have been someone like that douche terrorist cleric here in the Uk with the claws, hiding the fake digits in a prosthetic limb...lol


Highwayman said:
guessing from the literal thumb drive that maybe the courier must have been someone like that douche terrorist cleric here in the Uk with the claws, hiding the fake digits in a prosthetic limb...lol
Click to expand...

Sadly not the end though. 70 odd army recruits went round town in Pakistan today, but not as they intended during a double "revenge" bomb attack today. God bless 'em.

Sort of reminds me of a Not the 9 o'clock news sketch:

"380 people died in a fireball plane crash today, don't panic, no British were on board".


Barack Obama kept military commanders hanging by declaring he would 'sleep on it' before taking 16 hours to give the go-ahead to raid Bin Laden's compound.

Hit squads of specialist Navy Seals - who were not even told who they were preparing to capture - had practised the mission at two reconstructions of the terror chiefs sprawling compound.

The mission looked set to be given the all clear last Thursday when analysts confirmed beyond doubt that Bin Laden was in busy town of Abbottabad in northern Pakistan. 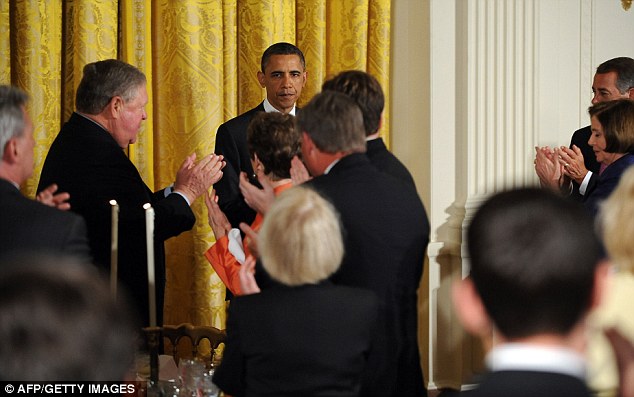 Luckily, the four U.S. helicopters were not detected by Pakistan's military who would have been quick to take action against the uninvited aircrafts.

After a 40-minute raid, the details of which are still emerging, Bin Laden was declared dead having received a bullet to the brain.

Millions of U.S. citizens still scarred by the atrocities of September 11 took to the streets to celebrate news that the world's most wanted terrorists had been killed.

Obama received a rousing standing ovation from his own party and political rivals alike yesterday as American's rejoiced in the defeat of Osama Bin Laden.

President Obama retold to members of Congress details of the skilled mission that claimed the head of the world's most wanted terrorist.

And for a moment rising gas prices, high unemployment and future economic concerns were forgotten as his 2012 re-election campaign received a massive boost.

Upon hearing Bin Laden's name, lawmakers of both parties interrupted the president with a standing ovation and whistles.

The moving applause came as scenes of celebration and reflection unfolded across the U.S. where citizens have longed for the Al Qaeda leader to be slain.

In Washington, hundreds of people continued to celebrate outside the White House after Obama had said earlier that the world was now 'a safer place'. 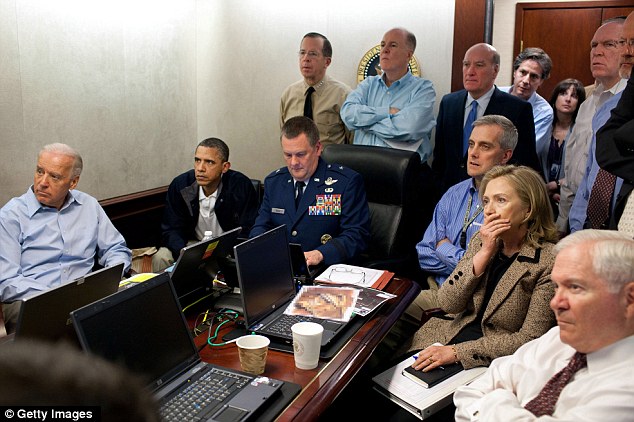 Baseball players in a game between the Los Angeles Angels and the Boston Red Sox paused for a moment of silence before the match. 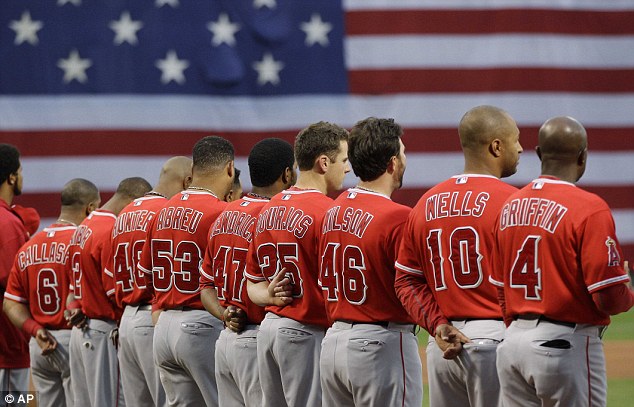 But perhaps the most emotional scenes were in New York, where memories of the 9/11 atrocity that shocked the world are still vivid.

Thousands of peoplemarked the occasion by converging at Ground Zero, the site of the World Trade Centre that was destroyed by Bin Laden's attack.

The mood of euphoria continued across the country as Obama gave a speech at a White House dinner and urged colleagues to 'harness some of that unity'.

At the event for members of Congress, Obama acknowledged past disagreements and predicted future ones. But he said bin Laden's demise was a reminder that what the country can achieve transcends party labels. 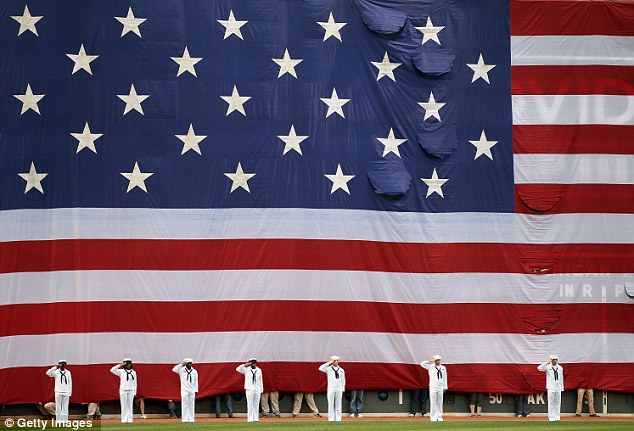 Analysts confirmed beyond any doubt that Osama bin Laden was on the premises of the Abbottabad compound months ago. Link Removed due to 404 Error New York Times story notes that Obama asked his key defense advisers for options – on March 22. The Times passes over everything that unraveled in the ensuing month. Outgoing CIA Director Leon Panetta pushed for a response in a meeting held last Thursday. Three reporters at the Link Removed due to 404 Error Obama’s response: “I’m not going to tell you what my decision is now – I’m going to go back and think about it some more. I’m going to make a decision soon.”

Some bloggers have highlighted the anonymous tale of an alleged White House “insider” posted Link Removed due to 404 Error. According to that account:

there had been a push to invade the compound for several weeks if not months, primarily led by Leon Panetta, Hillary Clinton, Robert Gates, David Petraeus, and Jim Clapper. The primary opposition to this plan originated from Valerie Jarrett, and it was her opposition that was enough to create uncertainty within President Obama. Obama would meet with various components of the pro-invasion faction, almost always with Jarrett present, and then often fail to indicate his position. This situation continued for some time, though the division between Jarrett/Obama and the rest intensified more recently, most notably from Hillary Clinton. She was livid over the president’s failure to act, and her office began a campaign of anonymous leaks to the media indicating such. As for Jarrett, her concern rested on two primary fronts. One, that the military action could fail and harm the president’s already weakened standing with both the American public and the world. Second, that the attack would be viewed as an act of aggression against Muslims, and further destabilize conditions in the Middle East.

'Last night, as Americans learned that the United States had carried out an operation that resulted in the capture and death of Osama bin Laden, I think we experienced the same sense of unity that prevailed on 9/11,' he said, urging that the spirit continue.

Among the Republicans who rose to their feet were House Speaker John Boehner of Ohio and House Budget Committee Chairman Paul Ryan of Wisconsin. Obama has been sharply critical of Ryan's 2012 budget plan.

'We were reminded again that there is a pride in what this nation stands for and what we can achieve that runs far deeper than party, far deeper than politics,' Obama said. He noted other moments this year that brought the country together, including the January assassination attempt on Rep. Gabrielle Giffords. He added bin Laden's death to that list.

'So tonight, it is my fervent hope that we can harness some of that unity and some of that pride to confront the many challenges that we still face,' he said.

The dinner, for the bipartisan congressional leadership and key committee leaders, was hosted by Obama and his wife, Michelle. It included Vice President Joe Biden and his wife, Jill, as well as Cabinet members and senior White House aides.

Obama said he knows the unity that permeated the country after the September 11 terrorist attacks orchestrated by bin Laden has 'frayed a little bit over the years' and said he has 'no illusions' about the difficulties of the debates awaiting them.

It came as four out of five citizens said they backed the president’s decision to order the special forces mission which killed the al Qaeda leader. 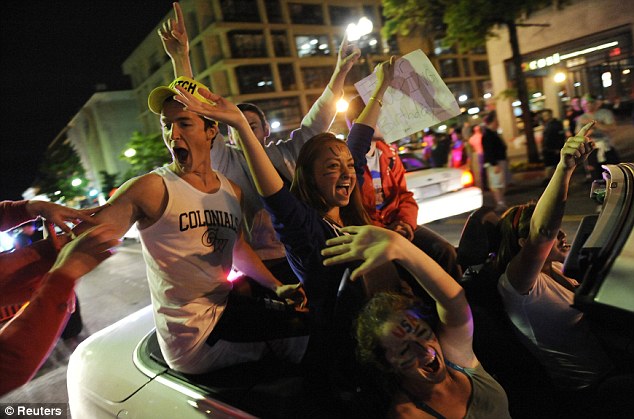 A grand thought Ciara, but I fear it won't. I can't help but feel this will take the world into a whole new realm of terrorism.

As with most fanatic movements when its leader is no more the overkill drive looses its momentum (eg) Adolf Hitler.


Ciara said:
As with most fanatic movements when its leader is no more the overkill drive looses its momentum (eg) Adolf Hitler.
Click to expand...

While I do understand your point Ciara, I think the Nazi regime was more than a fanatic movement. It was a country wide established government of conquerers. Al Qaeda is a fragmented group of insane terrorists. Now that their main leader is dead, many will be trying to prove that they have what it takes to replace Bin Laden.

Then lets hope they don't succeed

NEWS ‘I Trusted Him’: London Attacker Was Friendly With Neighbors

What Bin Laden’s Death Means For The War On Terror