Emotet is an advanced, modular banking Trojan that primarily functions as a downloader or dropper of other banking Trojans. Emotet continues to be among the most costly and destructive malware affecting state, local, tribal, and territorial (SLTT) governments, and the private and public sectors.


Emotet continues to be among the most costly and destructive malware affecting SLTT governments. Its worm-like features result in rapidly spreading network-wide infection, which are difficult to combat. Emotet infections have cost SLTT governments up to $1 million per incident to remediate.

Emotet is an advanced, modular banking Trojan that primarily functions as a downloader or dropper of other banking Trojans. Additionally, Emotet is a polymorphic banking Trojan that can evade typical signature-based detection. It has several methods for maintaining persistence, including auto-start registry keys and services. It uses modular Dynamic Link Libraries (DLLs) to continuously evolve and update its capabilities. Furthermore, Emotet is Virtual Machine-aware and can generate false indicators if run in a virtual environment.

Emotet is disseminated through malspam (emails containing malicious attachments or links) that uses branding familiar to the recipient; it has even been spread using the MS-ISAC name. As of July 2018, the most recent campaigns imitate PayPal receipts, shipping notifications, or “past-due” invoices purportedly from MS-ISAC. Initial infection occurs when a user opens or clicks the malicious download link, PDF, or macro-enabled Microsoft Word document included in the malspam. Once downloaded, Emotet establishes persistence and attempts to propagate the local networks through incorporated spreader modules. 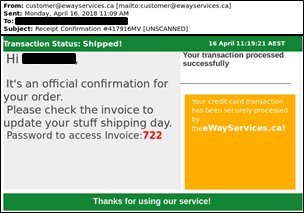 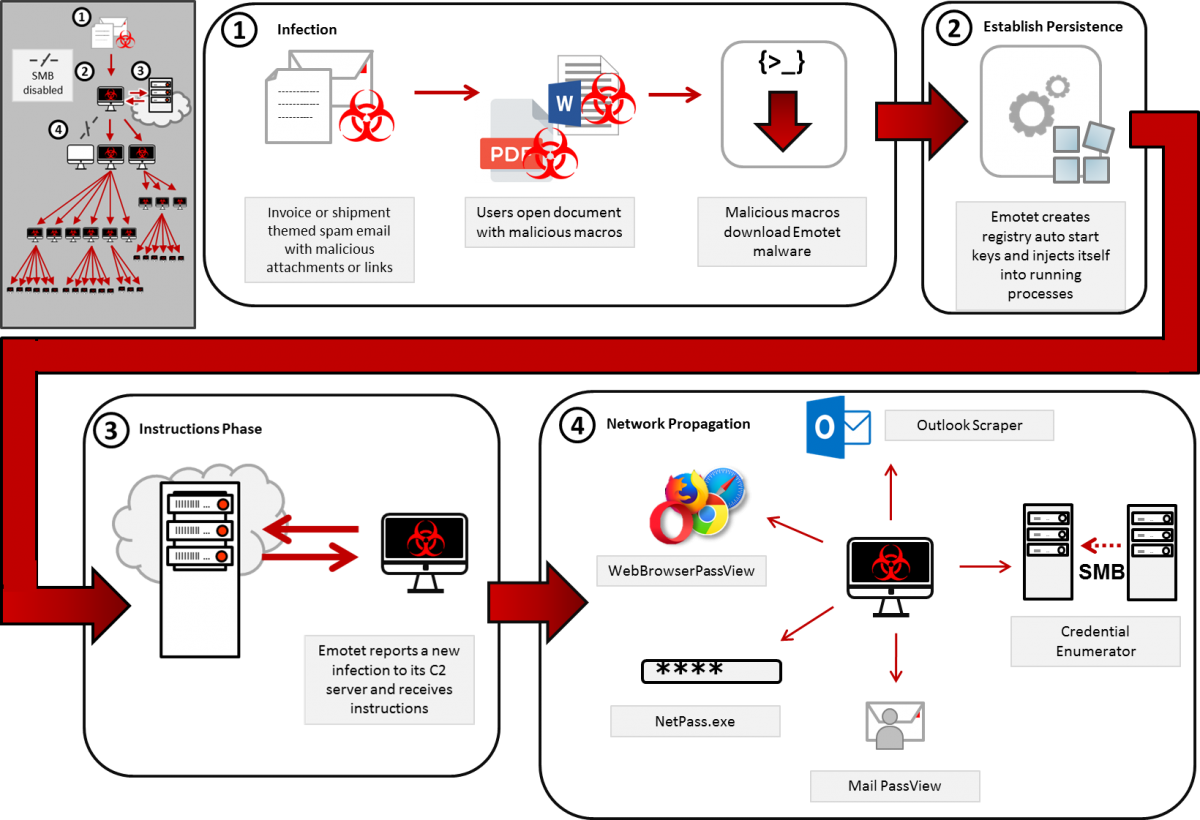 
To maintain persistence, Emotet injects code into explorer.exe and other running processes. It can also collect sensitive information, including system name, location, and operating system version, and connects to a remote command and control server (C2), usually through a generated 16-letter domain name that ends in “.eu.” Once Emotet establishes a connection with the C2, it reports a new infection, receives configuration data, downloads and runs files, receives instructions, and uploads data to the C2 server.

Emotet artifacts are typically found in arbitrary paths located off of the AppData\Local and AppData\Roaming directories. The artifacts usually mimic the names of known executables. Persistence is typically maintained through Scheduled Tasks or via registry keys. Additionally, Emotet creates randomly-named files in the system root directories that are run as Windows services. When executed, these services attempt to propagate the malware to adjacent systems via accessible administrative shares.

Note: it is essential that privileged accounts are not used to log in to compromised systems during remediation as this may accelerate the spread of the malware.


Negative consequences of Emotet infection include


NCCIC and MS-ISAC recommend that organizations adhere to the following general best practices to limit the effect of Emotet and similar malspam:


If a user or organization believes they may be infected, NCCIC and MS-ISAC recommend running an antivirus scan on the system and taking action to isolate the infected workstation based on the results. If multiple workstations are infected, the following actions are recommended:


MS-ISAC is the focal point for cyber threat prevention, protection, response, and recovery for the nation’s SLTT governments. More information about this topic, as well as 24/7 cybersecurity assistance for SLTT governments, is available by phone at 866-787-4722, by email at SOC@cisecurity.org, or on MS-ISAC’s website at MS-ISAC.

To report an intrusion and request resources for incident response or technical assistance, contact NCCIC by email at NCCICCustomerService@hq.dhs.gov or by phone at 888-282-0870.