News Feed
Today’s blog post provides two updates. First, an update on Windows 11 minimum system requirements based, in part, on feedback from the Windows Insider community. Second, information on the updated PC Health Check app that is now available to Windows Insiders. Since the introduction of Windows 11, we have received valuable feedback from the Windows Insider community, our fans, customers and partners. Thank you for being a part of the release of Windows 11, coming at a time when the PC is playing a more central role in the way we connect, work, learn, create and play. In June, we heard your questions about how we set the Windows 11 minimum system requirements and shared more information on the established principles that guided us in setting them. And as a team, we committed to exploring through Windows Insider testing and with OEMs whether there were devices running on Intel 7th Generation and AMD Zen 1 processors that met our principles. Following the results of our testing, we are making a small number of additions to the compatible processor list (explained further below), but otherwise will maintain the minimum system requirements as originally set. We have concluded that the compatible 64-bit processors selected, 4GB of memory, 64GB of storage, UEFI secure boot, graphics requirements and TPM 2.0 are the right minimum system requirements to deliver on the principles we established to best support you. We did identify a set of PC models that meet the principles while running on Intel 7th Gen processors that we did not originally include in our minimum system requirements. Based on those findings, we have expanded the list of compatible 64-bit processors to include the following:
After carefully analyzing the first generation of AMD Zen processors in partnership with AMD, together we concluded that there are no additions to the supported CPU list. We will be updating the PC Health Check app to identify the correct systems with the newly added Intel CPUs in the coming weeks before the tool is released for general availability. Additionally, we will have more to share on the tools and reports IT Pros can use to understand their organization’s hardware eligibility at scale as we get closer to Windows 11 general availability later this year. We have included more details below on our principles that guided us in establishing Windows 11 minimum system requirements. Here are some insights from the data we gathered over the last couple months that affirmed our decision.
Following our announcement in June, we acknowledged that we missed an opportunity to provide clarity and accuracy through the PC Health Check app. Today, we are releasing an updated preview version of the PC Health Check app to Windows Insiders. This updated version expands the eligibility check functionality with more complete and improved messaging on eligibility and links to relevant support articles that include potential remediation steps – the screenshot below illustrates this. After a feedback period with Windows Insiders and with the additional updates for the newly added processors, we plan to re-release the PC Health Check app for general availability in the coming weeks. Today, we are also simultaneously releasing versions that support 64-bit Windows, 32-bit Windows, Windows on Arm and Windows 10 in S mode PCs to Windows Insiders. Windows Insiders can provide feedback on the PC Health Check app by going to Feedback Hub > Apps > PC Health Check. [caption id="attachment_175260" align="alignnone" width="542"] 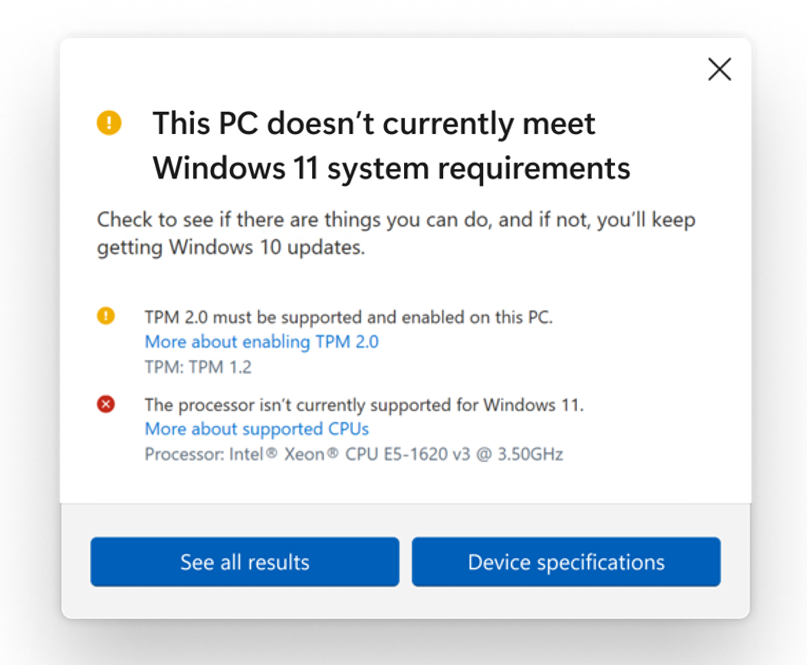 The eligibility check functionality in the PC Health Check app includes improved messaging on eligibility and links to relevant support articles that include potential remediation steps.[/caption] As our unprecedented number of Windows Insiders have shown, most people with eligible devices will choose to move to Windows 11 to experience all the new innovations across connection, productivity, creativity and play that it has to offer. For those who are using a PC that won’t upgrade, and who aren’t ready to transition to a new device, Windows 10 is the right choice. We will support Windows 10 through October 14, 2025 and we recently announced that the next feature update to Windows 10 is coming later this year. Whatever you decide, we are committed to supporting you and offering choice in your computing journey. If you want to see the full Windows 11 minimum system requirements, you can visit this page. Here is some additional detail on the principles that guided Windows 11 minimum system requirements: