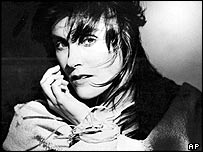 US pop star Laura Branigan, who enjoyed hits with the songs Gloria and Self Control in the early 1980s, has died of a brain aneurysm in her sleep aged 47. Branigan, also an actress, was nominated for four Grammy Awards and her Gloria single reached number two in the US chart in 1982.

Change the power mode for your Windows PC

C
Need USB power shut off while in SLEEP mode