This joint Technical Alert (TA) is the result of analytic efforts between the Department of Homeland Security (DHS), the Department of the Treasury (Treasury), and the Federal Bureau of Investigation (FBI). Working with U.S. government partners, DHS, Treasury, and FBI identified malware and other indicators of compromise (IOCs) used by the North Korean government in an Automated Teller Machine (ATM) cash-out scheme—referred to by the U.S. Government as “FASTCash.” The U.S. Government refers to malicious cyber activity by the North Korean government as HIDDEN COBRA. For more information on HIDDEN COBRA activity, visit HIDDEN COBRA - North Korean Malicious Cyber Activity | US-CERT.

FBI has high confidence that HIDDEN COBRA actors are using the IOCs listed in this report to maintain a presence on victims’ networks to enable network exploitation. DHS, FBI, and Treasury are distributing these IOCs to enable network defense and reduce exposure to North Korean government malicious cyber activity.

This TA also includes suggested response actions to the IOCs provided, recommended mitigation techniques, and information on reporting incidents. If users or administrators detect activity associated with the malware families associated with FASTCash, they should immediately flag it, report it to the DHS National Cybersecurity and Communications Integration Center (NCCIC) or the FBI Cyber Watch (CyWatch), and give it the highest priority for enhanced mitigation.

NCCIC conducted analysis on 10 malware samples related to this activity and produced a Malware Analysis Report (MAR). MAR-1021537 – HIDDEN COBRA FASTCash-Related Malware examines the tactics, techniques, and procedures observed in the malware. Visit the MAR-10201537 page for the report and associated IOCs.


Since at least late 2016, HIDDEN COBRA actors have used FASTCash tactics to target banks in Africa and Asia. At the time of this TA’s publication, the U.S. Government has not confirmed any FASTCash incidents affecting institutions within the United States.

HIDDEN COBRA actors target the retail payment system infrastructure within banks to enable fraudulent ATM cash withdrawals across national borders. HIDDEN COBRA actors have configured and deployed legitimate scripts on compromised switch application servers in order to intercept and reply to financial request messages with fraudulent but legitimate-looking affirmative response messages. Although the infection vector is unknown, all of the compromised switch application servers were running unsupported IBM Advanced Interactive eXecutive (AIX) operating system versions beyond the end of their service pack support dates; there is no evidence HIDDEN COBRA actors successfully exploited the AIX operating system in these incidents. 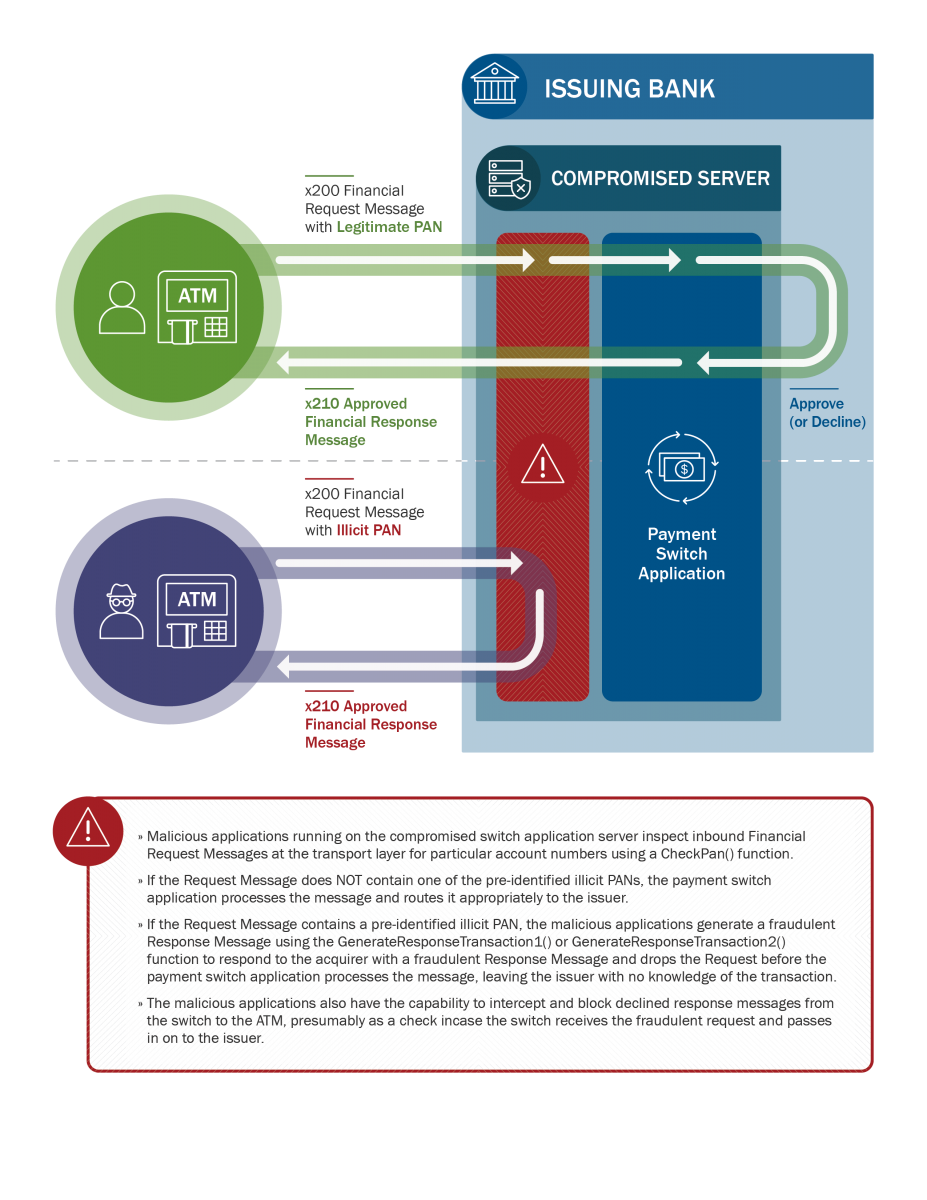 Figure 1: Anatomy of a FASTCash scheme​
A review of log files showed HIDDEN COBRA actors making typos and actively correcting errors while configuring the targeted server for unauthorized activity. Based on analysis of the affected systems, analysts believe that the scripts —used by HIDDEN COBRA actors and explained in the Technical Details section below—inspected inbound financial request messages for specific primary account numbers (PANs). The scripts generated fraudulent financial response messages only for the request messages that matched the expected PANs. Most accounts used to initiate the transactions had minimal account activity or zero balances.

Although some of the files used by HIDDEN COBRA actors were legitimate, and not inherently malicious, it is likely that HIDDEN COBRA actors used these legitimate files for malicious purposes. See MAR-1021537 for details on the files used. Malware samples obtained for analysis included AIX executable files intended for a proprietary UNIX operating system developed by IBM. The IBM AIX executable files were designed to conduct code injection and inject a library into a currently running process. One of the sample AIX executables obtained provides export functions, which allows an application to perform transactions on financial systems using the ISO 8583 standard.


Additionally, both commands use either the inject (mode 0) or eject (mode 1) argument with the following ISO 8583 libraries:

The U.S. Government recommends that network administrators review MAR-10201537 for IOCs related to the HIDDEN COBRA FASTCash campaign, identify whether any of the provided IOCs fall within their organization’s network, and—if found—take necessary measures to remove the malware.


A successful network intrusion can have severe impacts, particularly if the compromise becomes public. Possible impacts to the affected organization include


Monitor for Anomalous Behavior as Part of Layered Security


Recommendations for Organizations with ATM or Point-of-Sale Devices

Mitigation Recommendations for All Organizations


NCCIC encourages users and administrators to use the following best practices to strengthen the security posture of their organization’s systems:


For additional information on malware incident prevention and handling, see the National Institute of Standards and Technology (NIST) Special Publication (SP) 800-83: Guide to Malware Incident Prevention and Handling for Desktops and Laptops.[1]


Contact DHS or your local FBI office immediately. To report an intrusion and request resources for incident response or technical assistance, contact NCCIC at (NCCICCustomerService@hq.dhs.gov or 888-282-0870), FBI through a local field office, or the FBI’s Cyber Division (CyWatch@fbi.gov or 855-292-3937).