News Feed
At CES 2021, ASUS announced its latest lineup of laptops, displays and entertainment solutions at its “Be Ahead” virtual launch event. Among the Windows 10 devices unveiled: The ROG Flow X13, the first 2-in-1 convertible ROG gaming laptop, and the ROG XG Mobile, an ultraportable external GPU that augments the Flow X13’s gaming performance and connectivity. The Flow X13 arrives in an ultraslim 13-inch body with up to an 8-core AMD Ryzen 9 5980HS CPU and dedicated GeForce GTX 1650 GPU, which provides the performance needed for demanding workloads and enables strong performance in the latest games. Up to 32GB of memory provides smooth multitasking. A PCIe SSD provides high performance and up to 1TB of capacity, giving users ample storage space for games and professional portfolios. A 360-degree hinge maximizes touchscreen viewing and interaction, quickly flipping from laptop mode into positions for gaming, drawing and presenting. You can also take advantage of Windows Ink. The edge-to-edge keyboard design incorporates a full-sized, desktop-style layout into its compact chassis. The ErgoLift hinge raises the back of the keyboard as the system is opened for a better typing angle. Convert the X13 to tent mode and play games using compatible devices such as the Xbox controller. [caption id="attachment_175300" align="aligncenter" width="1962"]

ROG Flow X13[/caption] Sign on with Windows Hello. A choice of two 16:10 display options provides either a 120 Hz refresh rate or an Ultra HD 4K resolution with richer detail. You can also wake it up like a smartphone thanks to an integrated one-touch login. On both displays, Adaptive-Sync synchronizes the panel’s refresh rate with the GPU’s frame rate to reduce lag, minimize stuttering and eliminate visual tearing. The self-cleaning thermal module uses anti-dust tunnels to channel particles away from the fans and heatsinks. Minimizing build-up helps the cooling system operate more reliably over time, giving the laptop a long life of fast and flexible gaming. Other advancements improve airflow by up to 13% without increasing noise. Whether you’re collaborating on work or in games, advanced two-way AI noise-canceling removes unwanted sounds from both input and output audio. [caption id="attachment_175301" align="aligncenter" width="1961"] 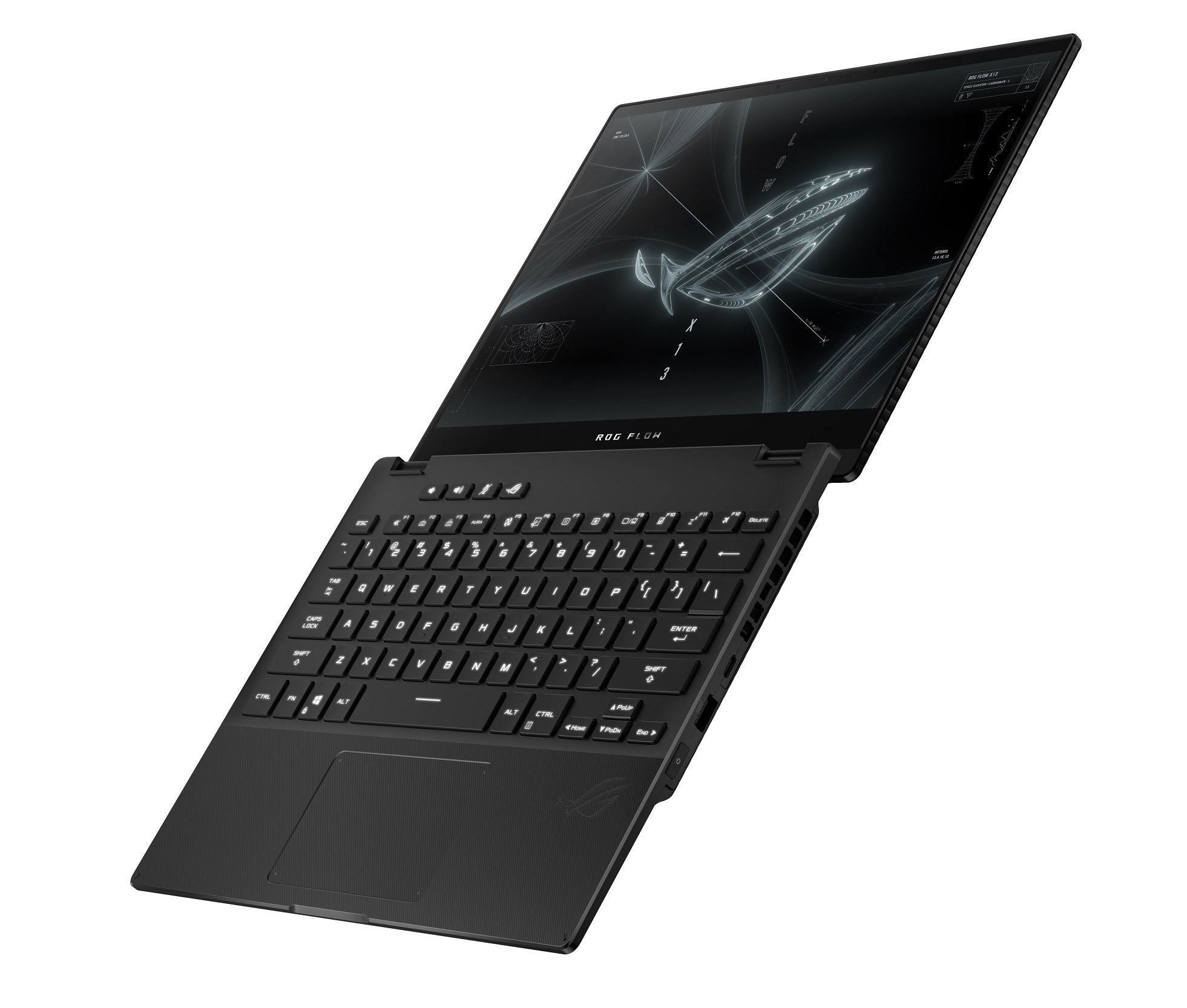 ROG Flow X13[/caption] The battery powers up to 10 hours of video playback. Fast-charging technology replenishes the battery from 0% to 50% in 30 minutes. The ROG XG Mobile is a fraction of the size of external graphics alternatives, but it incorporates up to a powerful GeForce RTX 3080 GPU connected directly to the CPU via a custom PCIe 3.0 x8 interface that’s faster than Thunderbolt 4. This top-of-the-line GPU is based on the new NVIDIA Ampere architecture, which combines CUDA cores for programmable shading with 2nd generation RT cores for advanced ray tracing and 3rd generation Tensor cores that offer greater throughput for AI-accelerated DLSS graphics. An integrated 280W AC adapter powers both the XG Mobile and Flow X13, removing the need for users to carry an additional power brick. ASUS also debuted the ASUS ZenBook Pro Duo 15 OLED (UX582), a 15-inch laptop equipped with the new tilting ASUS ScreenPad Plus, a full-width 4K secondary touchscreen that works with the main 4K OLED HDR display for multitasking. It’s backed by up to the latest generation Intel Core i9 processor and NVIDIA GeForce RTX 3070 graphics. [caption id="attachment_175302" align="aligncenter" width="1968"] 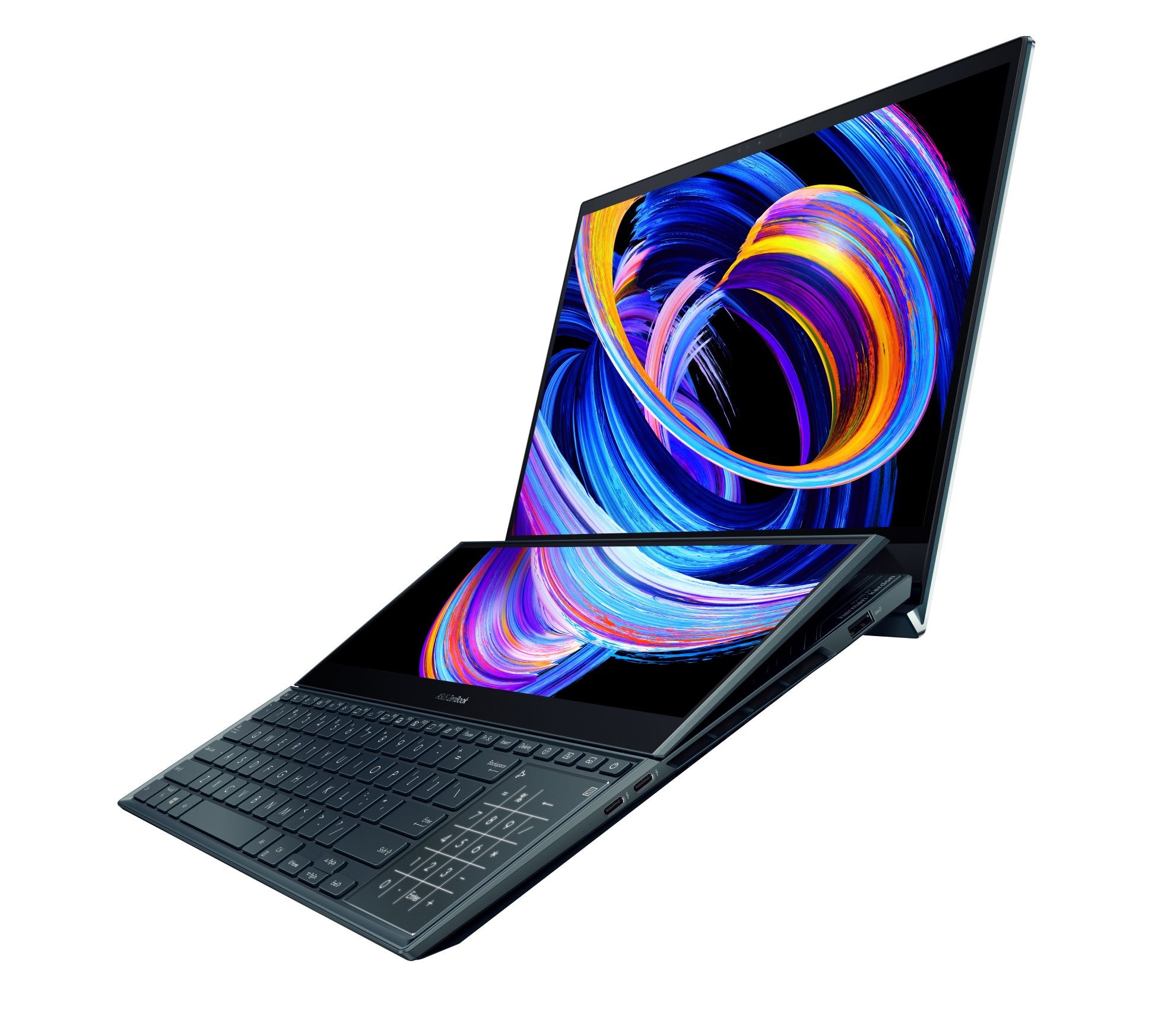 ASUS ZenBook Pro Duo 15 OLED[/caption] Expanding upon the original design, ScreenPad Plus incorporates an auto-tilt mechanism that automatically raises the rear of the secondary display by 9.5 degrees for improved usability and to reduce potential glare. The NVIDIA GeForce RTX 3070 discrete graphics chip in ZenBook Pro Duo has multiple cores to handle multi-screen workflows using ScreenPad Plus and the main display. The frameless screen design features an 89% screen-to-body ratio for more immersive visuals. The ASUS ZenBook Duo 14 (UX482) is a 14-inch laptop that also has the ASUS ScreenPad Plus, the secondary touchscreen that works with the main FHD NanoEdge display for multitasking. This device packs performance into its slim, 0.66-inch profile through a combination of 11th Generation Intel Core processors and NVIDIA GeForce MX450 discrete graphics or Intel Iris Xe integrated graphics. With the same auto-tilt mechanism as the ZenBook Pro Duo, the secondary display on ZenBook Duo is tilted by 7 degrees for improved readability. The laptop provides an immersive viewing experience, offering ultraslim bezels, an expansive 93% screen-to-body ratio and a four-sided frameless NanoEdge display. It is also TÜV Rheinland-certified for low blue light, to improve your comfort when you’re in front of it for long sessions, which you’ll be able to do thanks to longer battery life – 17 hours – and a USB-C Easy Charge feature for versatile charging from either a USB-C Power Delivery-certified charger or any standard USB-C charger. [caption id="attachment_175303" align="aligncenter" width="2000"] 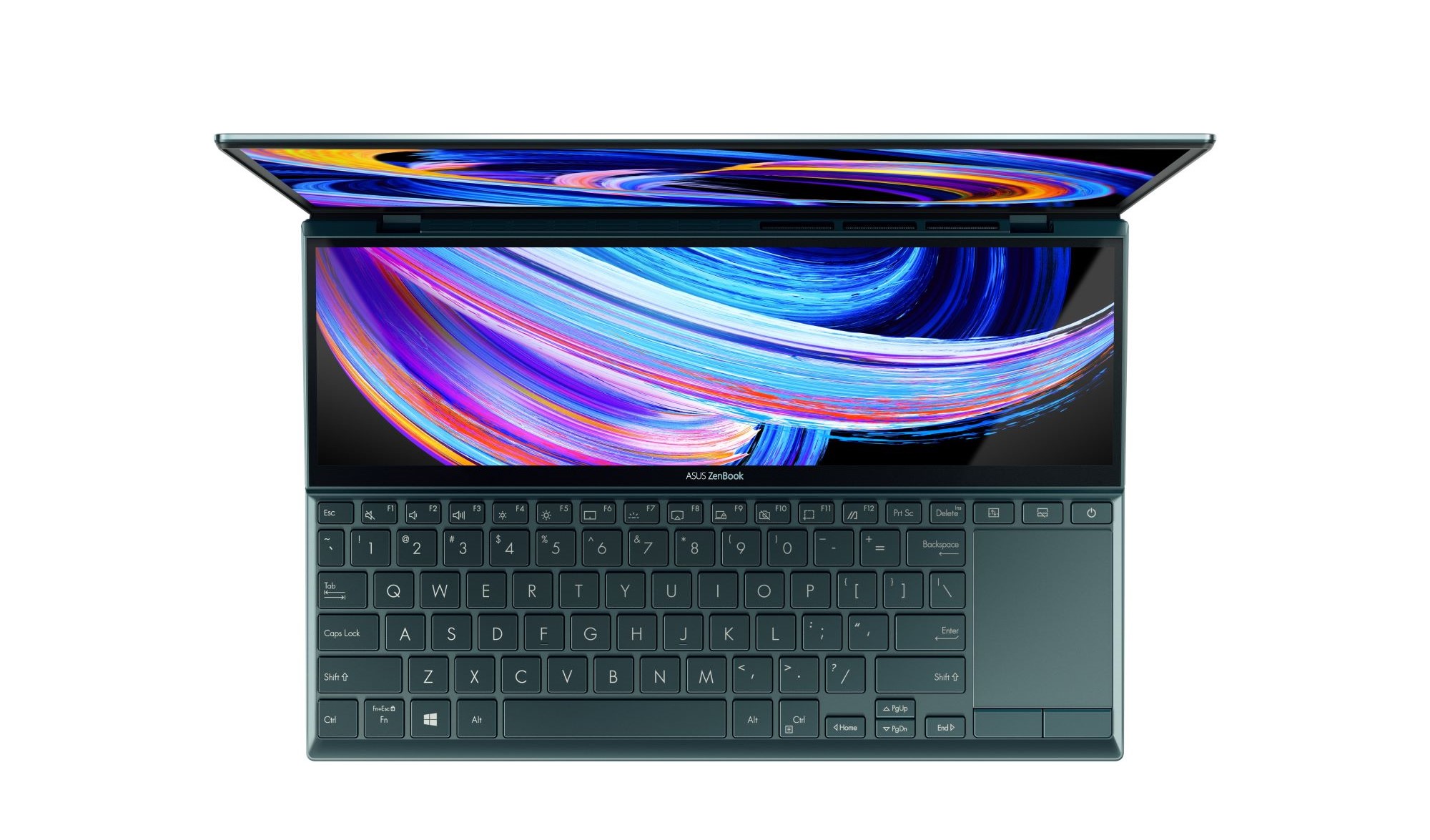 ASUS ZenBook Duo 14[/caption] Both ASUS ZenBook Pro Duo and ZenBook Duo include Control Panel, a fully customizable app that gives users precise and intuitive control of creative apps, including brush-size adjustment, saturation, layer opacity and more. It supports Adobe tools such as Photoshop, Lightroom Classic, Premiere Pro and After Effects. As with the gaming devices, you can sign on using Windows Hello. Both also include a stylus, which enables yet another layer of interactivity for users. So on both you’ll be able to use Windows Ink, wake on voice, far-field Cortana. Find out more about ROG and other ASUS devices revealed at CES 2021.