News Feed
Growing up in a rural village in India, Ashwini Doddalingappanavar was expected to follow the example of the women before her: stay close, get married and have children. She defied her community’s expectations to forge her own path. She learned how to use a mobile phone and access online maps, which made her confident when traveling by herself. And she quickly picked up on how search engines could help her find other answers. “I no longer feel any fear with so much direct access to knowledge,” she says. Now she works full-time educating teachers – more than 300 so far – using technology to help them be more effective in class. [caption id="attachment_175446" align="aligncenter" width="1024"] Ashwini Doddalingappanavar with women in her village (Photo by Basavaraj Hoogar)[/caption]
“I got a lot of pressure to marry and settle down because of my culture and family values, but I wanted more,” Doddalingappanavar says. “I felt like I had to come out of my comfort zone and needed to break the box that I was in. The feeling to do and be more was so strong that it gave me the courage to go for training. I decided to speak up and tell my family that I wanted to become independent. It was hard to convince my parents. That was the first time I left my village, and that was the first time I was away from my family. It was a big fear. But, leaving and being on my own was a huge breakthrough in my life.”

The 24-year-old got a job with Meghshala, helping to train teachers in Bangalore. She’s also pursuing an MBA.

Doddalingappanavar is one of 10 women featured in New Realities, a Lenovo-backed project that debuted in October and showcases each woman through an immersive 360-degree virtual reality (VR) film series. With the celebration of International Women’s Day on March 8, Lenovo turns the spotlight back on the women and how they’ve continued their journeys. It all began with a report last year. Lenovo’s 2020 Empathy and Technology Report revealed that 78% of those surveyed believe an “empathy gap” prevents them and others from seeing the world from perspectives other than their own. But the company also glimpsed a ray of hope in another observation: 51% of Gen Z (18- to 24-year-olds) surveyed acknowledged that technology makes them more empathetic, because it helps them experience life through other people’s eyes. “As a result of these findings, we challenged ourselves to create a unique, technology-driven project to amplify the voices of young women who are part of Gen Z, hoping that if the world heard their stories of hope and change, the combination of their passion, creativity and use of technology could begin to narrow the gap and bring us all closer together – particularly in the time of societal unrest, COVID-19 and social distancing,” says Dilip Bhatia, Lenovo Chief Customer Experience Officer. “Told in the first person, they invite us to see the world through their eyes. Together, the 10 stories build into a picture of an entire generation, transcending borders and actively working for a better world.”These are stories and voices we don’t normally hear – young women from diverse racial, cultural and socioeconomic backgrounds.Each of the women featured in the New Realities films received Windows 10 Lenovo devices specifically to support their mission, such as the enterprise-grade ThinkPad X1 Yoga laptop for coding, or the Yoga C940 for music. “I am learning Python with the help of this system – and I am enjoying learning,” says Doddalingappanavar, referring to her Lenovo IdeaPad D330 laptop. “It makes expanding my knowledge much easier. It makes presenting to my peers, teachers and students much easier. It is very user-friendly. Personally, I love it.” Lenovo partnered with Girl Up (the gender equality initiative of the United Nation Foundation), award-winning American filmmaker and activist Ava DuVernay, One Young World and other nonprofit organizations to develop the stories and then to reach a wider global audience. Lenovo has also committed $100,000 in grant money and scholarships to help these young women pursue fields of study that align with their goals, and create opportunities for the next generation of budding “changemakers.” [caption id="attachment_175449" align="aligncenter" width="1024"] 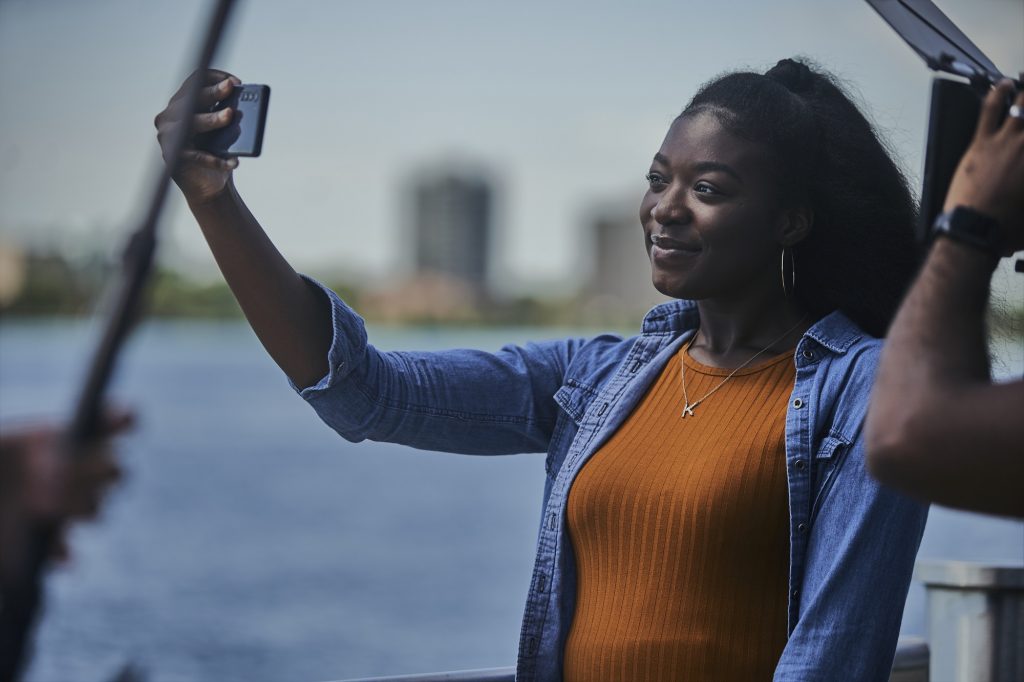 Kemi Dauda (Photo by Sylvia Jarrus)[/caption] One of the women profiled in New Realities, Kemi Dauda, leads a team of nine high school and college-age women in the nonprofit she founded as a college freshman in 2017, Bringing Hope Back Home (BHBH). Majoring in psychology and minoring in Afro American & African studies at the University of Michigan, she will be graduating this spring. BHBH provides Detroit high school students with college prep resources. It initially began as summer workshops at Dauda’s high school, covering topics such as financial aid, SAT prep and essay writing. The group transitioned from in-person programming to virtual webinars and 1:1 video calls and started helping students outside of Detroit, hoping to be more helpful. [caption id="attachment_175448" align="alignright" width="683"] 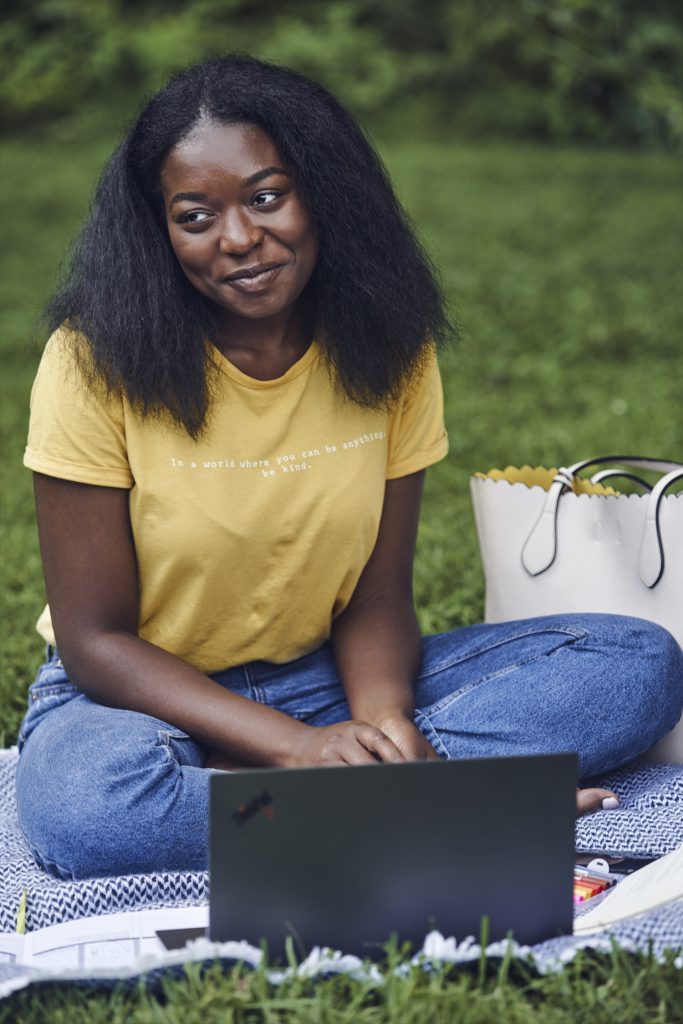 Kemi Dauda with her Lenovo ThinkPad X1 Yoga laptop (Photo by Sylvia Jarrus)[/caption] “I’m determined to give back to my community and it makes me proud, even though I’m just a small part of these students’ life,” says Dauda. “I see myself in them, and them in me. In this way, I’m helping students bridge the gap between their peers across the country.” Dauda has had to cross big chasms most of her young life. Born in the U.S., she moved to Nigeria with her family when she was 7, then back to the U.S. when she was 12 – to start high school in a place that was no longer familiar to her. “Learning a culture that I had once thought I knew, from scratch, is one of the hardest things I have ever done. It was a pivotal moment in my ethnic, racial identity development. As a 7-year-old child, I was overwhelmed by the sudden change and new exposure to different cultures, languages and a new way of life. I eventually adapted and was able to truly embrace my Nigerian identity,” says Dauda, who thrived in the rigorous academic environment there. Then the family returned to the U.S. five years later. “Once again, I was a stranger in a place that I was supposed to call home. I felt so out of place. I was starting afresh with no friends or natural supports. It was definitely harder to come back,” she says. After she graduates from college, Dauda plans to take professional development training pertaining to non-profits and leadership. Others from the New Realities series are also pursuing more training in their chosen interests, with some hosting STEM (science, technology, engineering and mathematics) workshops and teaching meditation to young women. [caption id="attachment_175450" align="aligncenter" width="1024"] 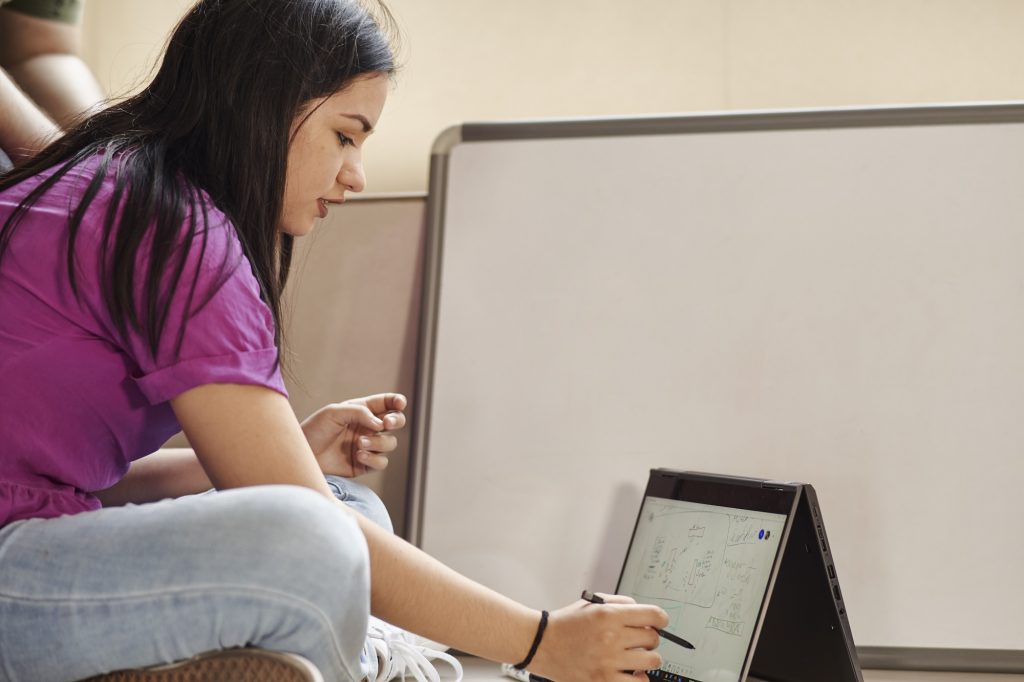 Mariann Avila with her ThinkPad X1 Yoga laptop (Photo by Caro Tovilla)[/caption] Mariann Avila was only 15 when she started School On The Road (SOTR), a nongovernmental organization that brings STEM activities and education to young people across Mexico. Now 21 and a college student in Monterrey, Mexico, she’s seen her organization evolve into a learning center, from college students building a non-profit to helping kids aged 7 to 15 writing their first “Hello world” – something Avila says is “a CS joke, nerds will get it

)!” Her favorite activities with the group are coding with kids and making slime. “I'm a huge nerd, but those who code can agree that you need a very creative mind to find easy ways to solve problems!” says Avila, whose own journey to becoming a data scientist started at a science fair, which is what SOTR feels like – a traveling type of fair. “Making slime is a simple yet messy experiment that shows kids a 101 scientific method; asking a question, experimenting, data and reaching a conclusion.” [caption id="attachment_175453" align="alignleft" width="768"] 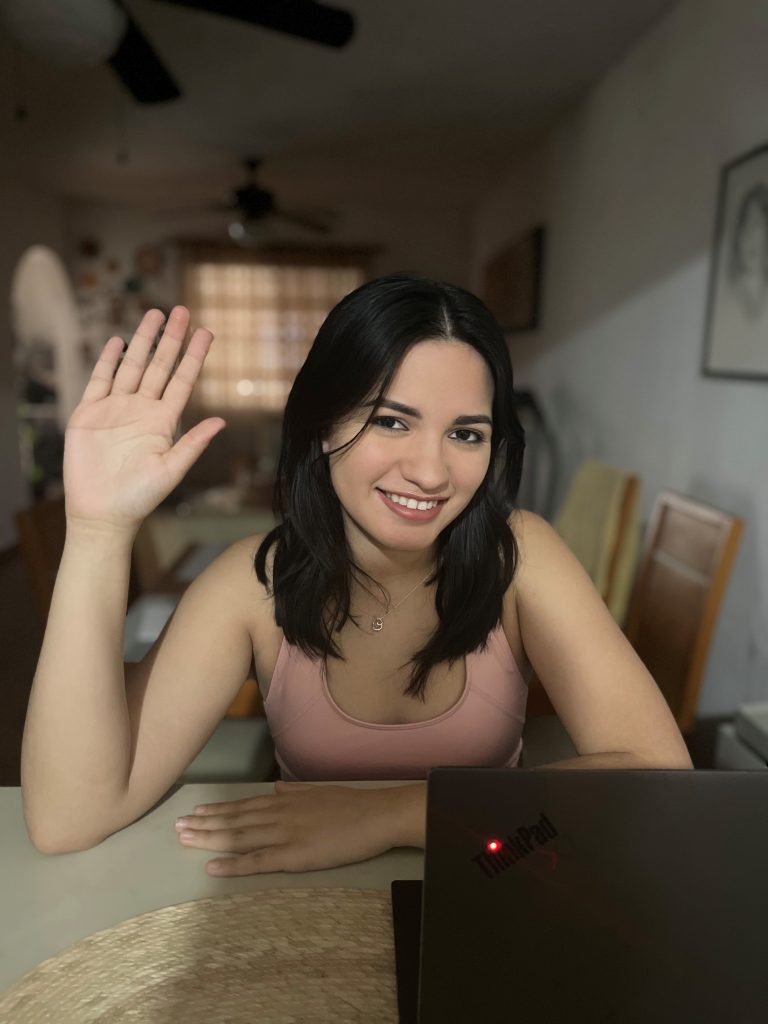 Mariann Avila (Photo by Mariann Avila)[/caption] She’s always been drawn to numbers. “They are a universal language – and something I have found I’m good at,” she says. “When it comes to data – I know it’s not just about the numbers. You always hear about using data to sell things to people, but never about leveraging data to help them. I’ve now seen the way data and information can help people make better decisions.” For her, the ThinkPad Lenovo gave her is “a supercomputer!” She adds, it’s helping her get closer to becoming a data scientist, which is her dream. Avila has joined forces with her local Girl Up club to inspire her peers to focus on their education, taking part in an Instagram Live and a Girl Up panel. Originally, plans for New Realities included in-person events across the world to encourage as many people as possible to view and experience the 360-degree VR films first-hand. “Then the pandemic hit, which made us immediately rethink the entire project. Instead of in-person unveilings, we built a fully immersive virtual gallery and hosted a worldwide movie premiere across Asia, Europe and the Americas,” Bhatia says. “In addition to entirely shifting our event plans, our film crews also had to carefully monitor all critical safety protocols in each of the 10 markets our young changemakers lived in.” [caption id="attachment_175452" align="aligncenter" width="1024"] Ashwini Doddalingappanavar filming her video for New Realities (Photo by Basavaraj Hoogar)[/caption] In one case, the team decided it would be too risky to send a crew to film, so they delivered equipment to the woman and then trained her – remotely – to shoot her own film. “By overcoming this obstacle, a shining creative moment emerged,” Bhatia says. “Ashwini, who lives in rural India and had no real experience with technology, was able to bring viewers into her world, on her own terms, resulting in an amazing, heartfelt film that gives viewers a chance to experience the world as she sees and lives it.” “While the pandemic had us reconsider and adapt nearly every single part of our original project, New Realities’ mission of showing how smart technology can help to increase understanding and deepen our empathy became even more critical,” says Bhatia. Check out all their other stories at the New Realities site. Lead photo: Ashwini Doddalingappanavar working on content for her New Realities video. (Photo by Ramesh Hulageri)