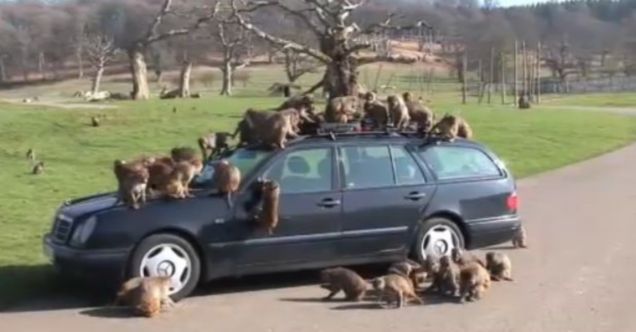 The meddling macaques haven’t had any cars to abuse for the past two years because their Monkey Jungle enclosure has been closed to the public while it was redeveloped.

So staff thought they’d give the park’s notoriously cheeky residents a treat before the grand re-opening this weekend.

Needless to say, the 100-strong furry gang had a ball. The wing mirrors and wheel trims were quickly swiped and the suitcases on the roof ransacked.

The animals delighted in running around with various items of clothing they found in them – one even did several forward rolls while holding a blue top.

A cuddly lion toy also provided much fascination, with one monkey at first jumping back in fright as if he thought for a second that it was real.

Staff also packed a football for the beasts to play with. However, one monkey commits a handball straightaway, then runs off with it in his mouth. A definite yellow card.

There are 22 species of macaque monkeys and they are the most widespread primates in the world. They can be found from Japan to Afghanistan, as well as North Africa.

Longleat, the country seat of the Marquesses of Bath, was the first stately home open to the public. Its safari park opened in 1966 and claims to be the first such attraction outside Africa.

More Monkeys take car apart - YouTube video | Metro.co.uk
Last edited by a moderator: Jul 26, 2013
You must log in or register to reply here.