No problems installing but be warned there are a few strange things in the install process, mainly be sure to click on Options if you don't want to install on drive C:\, and instead of asking you to change disks it asks for the next file it needs, you have to insert the next disk and select the correct file from the on screen file manager.

I didn't know what was going on the first time.

The game looks fantastic and runs very smoothly on my computer.
Combat has a lot of options so it takes a while to get the hang of it.

I only played through the tutorial and I'm going to do it again. befor I go on into the game.

I looks like it's going to be a lot of fun.

Staff member
Premium Supporter
I played Witcher 2 and really enjoyed it. I was going to buy Witcher 3 on Thursday until I saw the price. First time I've ever seen a new game at £50.00 as opposed to the normal £35 that games usually go for. I'll wait until the price drops and besides I've not finished playing Dying Light yet.
It does look purdy tho'...

Microsoft Community Contributor
I played the previous games and while I liked the environment and all the detail, I didn't like the channeled feel of always following a path.

That's gone in The Witcher 3, you can now wander around, and they claim this is about the biggest RPG yet.
I'm really looking forward to getting past the tutorial stage and getting to the point where I don't have to think about what button to push so I can really get into it.

Staff member
Premium Supporter
So all the bitching about graphics down-grading on the forums is just hype?

I've messed around and I'm running with it set to High settings not Ultimate but I wanted to get into the game without hassles.
Once I've gotten going I'll try upgrading the graphics quality to Ultra and see what happens but the graphics look awesome.

They almost have the feel of a renaissance painting. 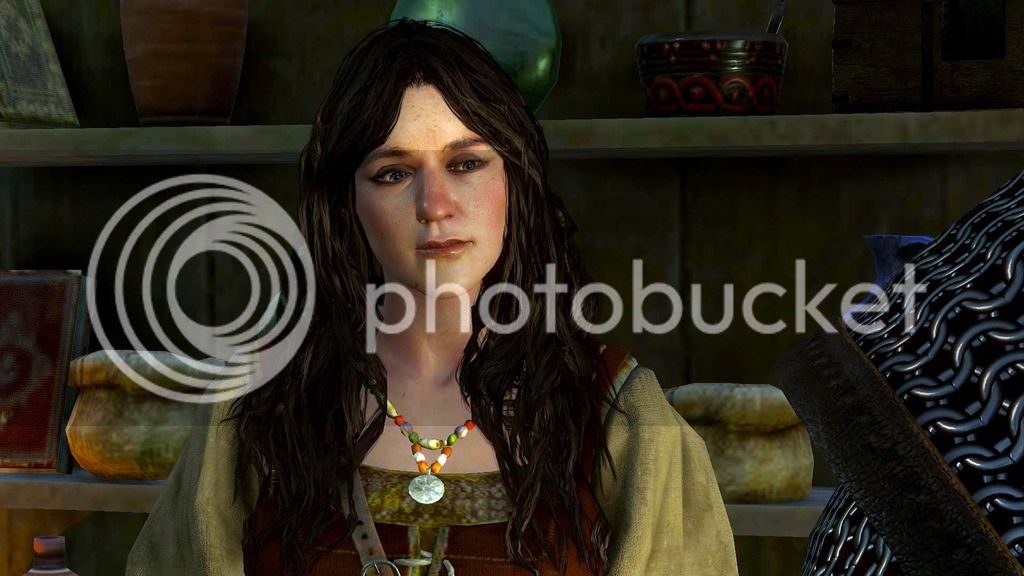 The characters look great, each one has a personality of it's own.

On High settings I'm getting between 50fps and 60fps.
I tried Ultra Settings and frame rates dropped a lot, slower than any other game I've played.
So this game does have a high overhead.

I'm going to leave it on high with Anti-Aliasing turned off.
It doesn't seem to support 3D Stereo, but I'm not sure I could run it if it did.

50 Pounds is steep, that's almost $80 American.
It costs $60 here, still one of the most expensive games I can remember buying.

Staff member
Premium Supporter
I'll just wait a couple of months as they soon drop the price. Companies try to keep the 'launch buzz' going by dropping the price (eventually) so I'll wait until this opportunity presents itself.
Mike what is your set up again?
Although I just upgraded chip and moBo I'll be stuck with my 680 until September time and wondered how it would fare with a game like this one.

$90 Australian... as a Frence company they charge more the longer the distance... sort of a strange tax on non-locals.

looks nice but I'm with Kemical, will wait a bit.

Microsoft Community Contributor
Mike what is your set up again?

I'm not running a SSD for my Windows drive, I have 2, 1Tb Caviar black hard drives.

I've had this computer for 2 1/2 years, I'm about a year and a half from upgrading again.
Next time I'll go with an SSD, I'd love to have a large SSD to put my games on too.
We'll see what's state of the art by then.

Staff member
Premium Supporter
Thanks Mike. I see your running a 680 too so at least i know it'll run reasonably well. Thanks
J

Staff member
Premium Supporter
Hey Mike,
I couldn't wait any longer. I got it slightly cheaper with £5 knocked off in the STEAM sale so it's currently installing now. One of the major reasons I finally went for it was the user reviews and I've been playing The witcher 2.

One of the things that really cracked me up is that Geralt's beard grows.
If you don't visit a barber once in a while he grows a bushy beard. LOL

The detail in the game is amazing, just don't play it when the kids are in the room.
Lot of "F" words etc.

Anyway I'm really enjoying the game, your decisions do make a difference, I gone back several times and changed my mind because I didn't like the way it worked out.

It's a blast, and the combat is pretty easy, if you set it on Sword and Story.
Several times I've changed it to Story Only, when I was having a really hard time with a boss guy at the end of a story line.

It's a lot easier in terms of making potions etc, because once you make something, like Cat, (that lets you see in the dark) you will always have 3 of them in your inventory after resting, and every time you use Meditate to advance the time, it will heal you and refill all your potions, so you don't have to make them over and over as you did in the earlier games.

The whole interface is much more user friendly then the previous games.

I'm up to level 21 now, many of the quests you pick up early on, you can't complete tell later in the game, the level is listed so you can just wait until you get in that area to do them.

That's what I'm doing right now, going back and completing the quests that I skipped earlier when I was only in the early levels.
I still have others that can't be completed until I get in the 30s.

Best game of this type I've played in a long time, in my opinion much better than the earlier games because you can go pretty much anyplace not along a pathway like 1 and 2.

One suggestion, you will spend a lot of time in Walk mode, running all the time doesn't work, (you'll see why when you get in the game) set your rear side mouse button to switch back and forth between walk and run so you can switch back and forth easily.
It makes it much easier, you won't keep running past things you want to pick up etc.

Now I'm going to log in and play for a while, (the great thing about being retired).

Staff member
Premium Supporter
I've played about 8hrs now and noticed that the combat mechanics are slightly different to Witcher 2. Generally everything has also improved though and I'm amazed at how forgiving the gpu engine is. I'm running on a mixture of Ultra and High settings although I've set the frame limit to 30fps and it runs extremely smooth. The way the quests are set out seems better too as in the witcher 2 it was very easy to lose the trail on quests with me usually ending up resorting to a guide to get the job done.
In short I love it and the 16 free DLC's were a nice surprise too... This game should see me through to the release of Fallout 4 in November! Staff member
Premium Supporter
As I know there a few of us playing this game I've stickied the thread.

Anyone else playing the Witcher 3 and if so what are your thoughts... Like or dislike?

I'm playing in Sword and Story mode, the combat it pretty easy, for one thing he picks the correct sword on his own, unlike the earlier games where you had to decide which was the right one for the opponent.

My main technique is to roll and stay away from the front of things then stab them in the back.
Especially guys with shields, you can bang away forever from the front.

I also like the fact that once you make a potion it will always be in your inventory and replenish itself when you rest, as opposed to the earlier games where you had to make them over and over to keep them available.

I made a card to remind me what the signs do, and it helps to look in the Bestiary to see what different opponents are open to.

This is one of the best RPGs in years as far as I'm concerned.

MikeHawthorne said:
I also like the fact that once you make a potion it will always be in your inventory and replenish itself when you rest, as opposed to the earlier games where you had to make them over and over to keep them available.
Click to expand...

Damn I wondered why I couldn't make anymore... Thank you this has cleared up a mystery for me.
In battles I find pressing the 'Lock on target' key helps enormously (I've also popped this on my mouse using a thumb key, I also use another thumb key to cast signs) I changed the Tab button key which opens the signs panel to Q so it's a little nearer. I tend to use the roll command too as the new dodge skill is a little awkward to initiate.
As to what level I'm on I can't remember right now but I think it was the second option so one up from easy basically.

As for the best RPG? Yeah I'd say so... This game has raised the bar in so many ways. The developers should be rightly proud and it's worth every penny. I started out doing the early quests available from the locals posting boards etc, and staying away from the main quest line most of the time.

I went around and explored every question mark on the map.

I found that with a lot of the guarded treasures I could outsmart the boss guys who were too tough to fight, and steal the treasure anyway.

Now that I'm working on the main questline more of the time, I'm finding that there is a lot more involvement in the plot with sequences where I went for almost a half hour that was pretty much all video.

I only got to input some choices as to how things were going to proceed, or make a short run to do some task and then continue.

I'll have to remember to lock on to targets, I kind of forget to do that a lot.

You will end up with a lot of Minor Mutagens, note that you can combine them to make Mutagens, and then combine those to make Major Mutagens, I didn't figure this out for a while and kept selling them after I had place the ones I had in the available slots.

When I did realise it I didn't have any to combine, and had to go out and collect them again.

Staff member
Premium Supporter
I'm almost level 7 and loving it.. Great game!
You must log in or register to reply here.