Premium Supporter
Just a suggestion? I am not sure how you can avoid it. But, I would allow it to install, to stop the nagging, and then roll back, if you can see you are still having graphic problems

I have done that 3 times and each time it wants to reinstall again.

Premium Supporter
You can wait for the next insider update, which I believe is close, or, if you want to keep your older driver, download a third party program to stop it automatically updating. This is a good one:

Thanks davehc. I also found another one just a couple of minutes ago that seems to work.

How do I stop Windows 10 from updating my graphics driver?

Every time Windows 10 runs updates (which I see no way to control), it updates my graphics driver. I like the old one because it is faster. So, I have to reinstall it. This is getting to be a pa... Ref:
Windows 10 unveiled - Microsoft ushers in the next era of Windows by skipping 9

Signing up for Windows 10.

Many users will be wanting to know where they can get their hands on a copy of Windows 10 Preview. Luckily for us Mary Jo Foley has an article which includes the process of signing up:


Read the full article here:
Microsoft's Windows 10: What's new and how to get the preview bits | ZDNet
Click to expand...

I read your article its amazing thanks for your information
Last edited by a moderator: May 2, 2019

bassfisher6522 said:
I knew it was just a matter of time before you found a way....
Click to expand...

Yes mate! I think you're right.

Gah Microsoft, pulling numbers out of their ass again

Also 10 seems to add features linux has had for eons now like virtual desktops.

kemical said:
Ok what's missing on the next screenshot: 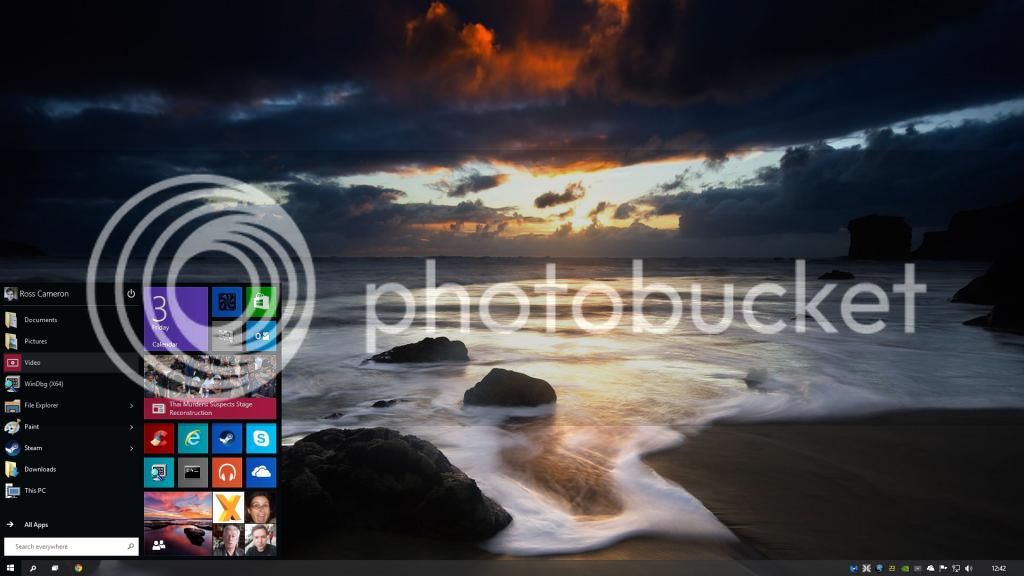 
Yup it's the watermark and this will show you how:
Removed... I eventually removed this app as it messed with the install.
Click to expand...

As far as I can see, the Watermark is still there, is that because the app has to work actively not when you open the image, i.e. you can't save the image without the watermark?

Staff member
Premium Supporter
If i remember correctly, it was a little app to remove watermark which I eventually stopped using due to it messing with the install of Win 10.

I do get how you mean it, including the comedic irony. But, for me, they are (now) in THE place I want them and I like that I can size them & move them about in that place.

Window 10 Inside Preview is good... But i think window 11 has extra Nice Preview...

Here you can check out Windows 10 November 2021 Update Rolling Out to All Win10 2004 Users. Let see what they are offering in the new update.

davehc said:
As I have just said in another thread, I don't think MS have ever called it Windows 9, but only referred to "the next OS". They have consistently called the builds Threshold.
Click to expand...

Windows 10 editions specially destined for the EU, Switzerland, and South Korea (though South Korean editions have "KN") have the letter "N" (for Not with Media Player) suffixed to their names (e.g., Windows 10 Enterprise N) and do not have media-related technologies like Windows Media Player or Camera. There are N editions for all Windows 10 versions except Mobile, Mobile Enterprise, and IoT Core. Microsoft was required to create the "N" editions of Windows after the European Commission ruled in 2004 that it needed to provide a copy of Windows without Windows Media Player tied in. The costs of the N Editions are the same as the full versions, as the "Media Feature Pack" can be downloaded without charge from Microsoft.

Those editions lack at least the following functionality:[citation needed]

It is possible to add the missing functionality with third-party software or with the Media Feature Pack, Groove Music and Xbox Video from Microsoft.

Windows 10 Home is designed for use in PCs, tablets and 2-in-1 PCs. It includes all consumer-directed features and is the equivalent to basic Windows 8, 8.1, Windows 7 Home Basic, and Home Premium.[citation needed]

In Windows 10 Home, it is not possible to make changes to how the Windows Update works - it is automatic, and one cannot choose which updates will be downloaded and installed. It is possible to postpone the restart of the system, but after some time, the system will restart on its own. By contrast, the Windows Pro and Enterprise editions both have an option to postpone updates completely, which can be further customized so that the system will ask the user which updates they wish to download. Windows 10 Home, however, does not support this feature.

Other restrictions include the inability to use remote desktop to access a computer that is running home edition (however one can remote desktop out of such a machine).[citation needed]

Windows 10 Pro is comparable with Windows 8 Pro, Windows 7 Professional and Ultimate, and Windows Vista Business and Ultimate. It builds on the Home edition and adds features essential for businesses, and functionally equivalent to Windows 8.1 Pro.[citation needed]

Windows 10 Enterprise provides all the features of Windows 10 Pro, with additional features to assist with IT-based organizations, and is functionally equivalent to Windows 8.1 Enterprise.[citation needed]

Windows 10 Enterprise LTSB (Long Term Servicing Branch) is similar to Windows 10 Enterprise but will not receive any feature updates, gives companies more control over the update process and is the most stripped down edition of Windows 10 available. It lacks the following applications and features:[citation needed]

Store including most modern apps like Xbox, Contacts, etc.

It is also not possible to reinstall the Store

The following applications are replaced with their old counterpart:[citation needed]

Modern Calculator is replaced with the original calc.exe

Windows 10 Education provides all Windows 10 Enterprise features, designed for use in schools, colleges, and universities. It will be available with Microsoft's Academic Volume Licensing, in a manner similar to Windows 8.1 Enterprise.

Windows 10 Mobile is designed for smartphones and ryobi router table reviews . It includes all basic consumer features, including Continuum capability. It is the de facto successor of Windows Phone 8.1 and Windows RT.

Windows 10 IoT Core is a version of Windows 10 designed specifically for use in small footprint, low-cost devices and IoT scenarios. It is a rebranded version of Microsoft's earlier embedded operating systems, Windows Embedded.

It was just a matter of time for them I'm quite sure that option is still available, but I'm not 100% positive. I didn't search for it too closely since I wouldn't even consider it. But, once again, I am confident that the OS can be utilized with a Local Account. If I recall correctly, you look in the bottom left corner of the initial screens where it asks for one's account information; although the phrase, the wording of the link is not very evident or clearly stated as to what it is for or what it implies, it accomplishes what you want.