News Feed
In the midst of the pandemic, Z by HP challenged seven of its global Z Ambassadors to collaborate on a mixed-media project that evolved over several months into a film and experiential art piece called “The Living System.” Like many people over the past year, these artists hopped on video calls to discuss their individual contributions. But they always aimed for a cohesive story that reflected how they were all interconnected in the creation process, using Z by HP devices and DreamColor displays. Along the way, they stepped out of their comfort zones, learned new techniques and found inspiration not only in nature and their neighborhoods, but in each other. “I always enjoy that when I'm working with other people because you need to adapt, and when you adapt you change, and these changes always tell you something about yourself,” says Alex Trochut, a graphic designer/illustrator from Barcelona now based in Brooklyn, New York, who took on the first segment of the piece. “What inspires me the most is discovering something new. It's that eureka moment and that's what everybody chases, I think, when they're creating.” Trochut created his “characters” using VR sculpting and new Cinema 4D (C4D) animation methods – a first for him. “Every time I touch a new tool, it expands the way I express,” he says. “The beginning of the story, it's going from micro to macro. So, the idea is you see these microscopic beings floating and somehow they are part of some sort of bigger entity. I wanted to create something that felt very organic.”Trochut’s part in the production led into Gmunk’s twist on the elements, in the form of smoke simulations. The Berkeley, California-based visionary – who produced a Windows 10 desktop wallpaper among his many credits – learned new software and techniques, including Bifrost Extension (a plug-in for Autodesk Maya) sim methods, Embergen and Gaia. Next up in the piece was Nidia Dias, an art director based in Porto, Portugal. She specializes in point clouds and 3D work. Her work complemented that of the other woman on the project, award-winning photographer Jody Macdonald, who used a drone and Premiere Pro for the first time, capturing dramatic scenery in the American Southwest. [caption id="attachment_175598" align="aligncenter" width="1024"] 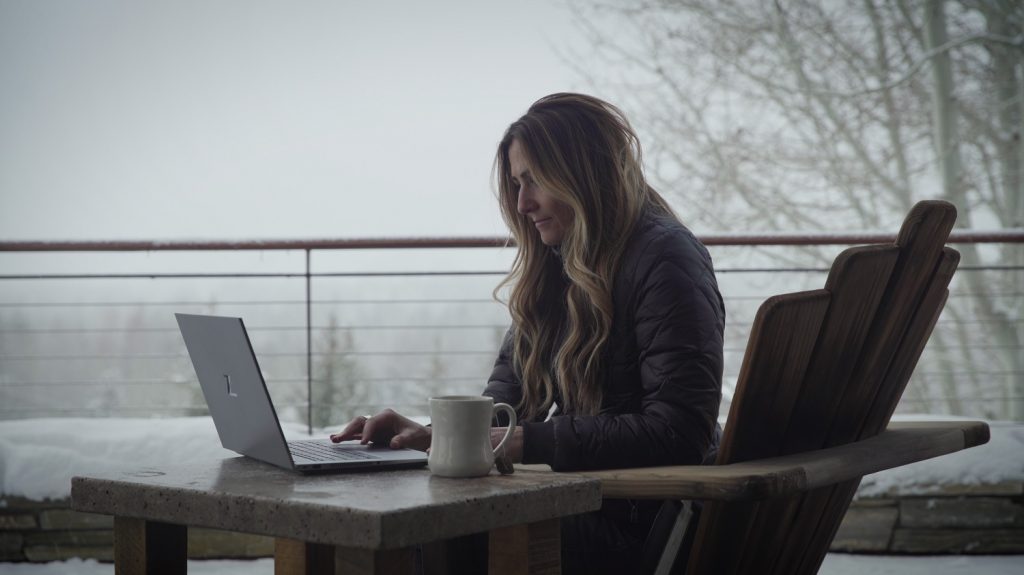 Jody Macdonald works on her Z by HP laptop. (Photo courtesy of Z by HP)[/caption] “I wanted to pick up elements from nature, but then change the perspective on how we're looking at them or how we’re seeing them or how I'm portraying it in 3D,” Dias says. “I wanted to get different elements, a flower or a tree branch or a rock, and then abstract them or create something else still related to nature.” Macdonald trekked to find a tree for Dias and landscapes that would work well with Rik Oostenbroek’s color palette. Under normal circumstances she would have gone abroad, but with pandemic restrictions, she scouted locations in her home country instead. “Obviously, the storyline had to be cohesive with the living systems, but everyone was just playing with their own shots and their own ideas,” Dias says. “But since Rik has such a strong palette that he uses in his work, I think that became an inspiration for a lot of us, and knowing that Jody was looking for locations that could fit nicely into his, that color palette kind of slowly started blending and emerging into the other artists. We really wanted to feel from start to end that it’s one full piece. And we hope that people see that and understand this whole idea of starting from the microorganisms, going from all the little things that you have in nature to the end: what if nature becomes a part of us as well?”Dias, who normally creates still images, had to animate for this project, so for her, it was a relief to have fast GPU rendering on her Z4 desktop with NVIDIA graphics so she could quickly change or add elements without waiting. She doesn’t consider herself a technological person in terms of GPU or cooling systems. What matters most to her is having a PC that works without having to worry about what goes inside of it. Oostenbroek, who lives in a small town near Amsterdam, Netherlands, usually blends his digital art with real-life assets, such as photos he’s shot or paintings he’s brushed into life. But for this project, he dove into 3D animation. “For me, honestly, the biggest challenge was how to think like an animator. It was quite a steep learning curve,” he says. “It was actually the first time ever that I enjoyed an animation process, though in the beginning I was pretty frustrated. But with everybody giving me feedback, I gained so much energy and inspiration. It was especially nice how friendly and supportive everybody was, and how respectful.” This international collaboration with the others, who all met previously in person through the Z Ambassadors program, really opened Oostenbroek’s eyes to the potential of remote projects with other artists. “There’s so much possible within this new world we’re living in. Before COVID, you would have never thought about taking that leap,” he says. “But now, we’re working in different time zones with different software with all different perspectives, different backgrounds. And I actually never saw a project like this come to life with such different individuals. And that really amazed me at the end, especially after seeing the result.” Shane Griffin, a visual artist from Dublin, Ireland, who now lives in New York City, followed up on Oostenbroek’s contributions by developing photorealistic art in surrealist outdoor lighting – a first for him. “I’m in New York, so I wanted to create this overgrown Garden of Eden that kind of consumes the city. There was an interest in duality between the concrete nature of Manhattan and Mother Nature coming in to reset things in a way,” he says. “I let my imagination run a bit wild with it. And it was fun to recreate the Brooklyn streets. I wanted to see what my surroundings would look like if there was my interpretation of a living system growing over these surroundings that I’m familiar with. So, it definitely came from a place of reality and the surroundings I see every day. And I wanted to do something that was kind of challenging for me as well.” Orlando Arocena – better known on social channels as Mexifunk – was tasked with making the movie poster for the project. [caption id="attachment_175603" align="aligncenter" width="819"] 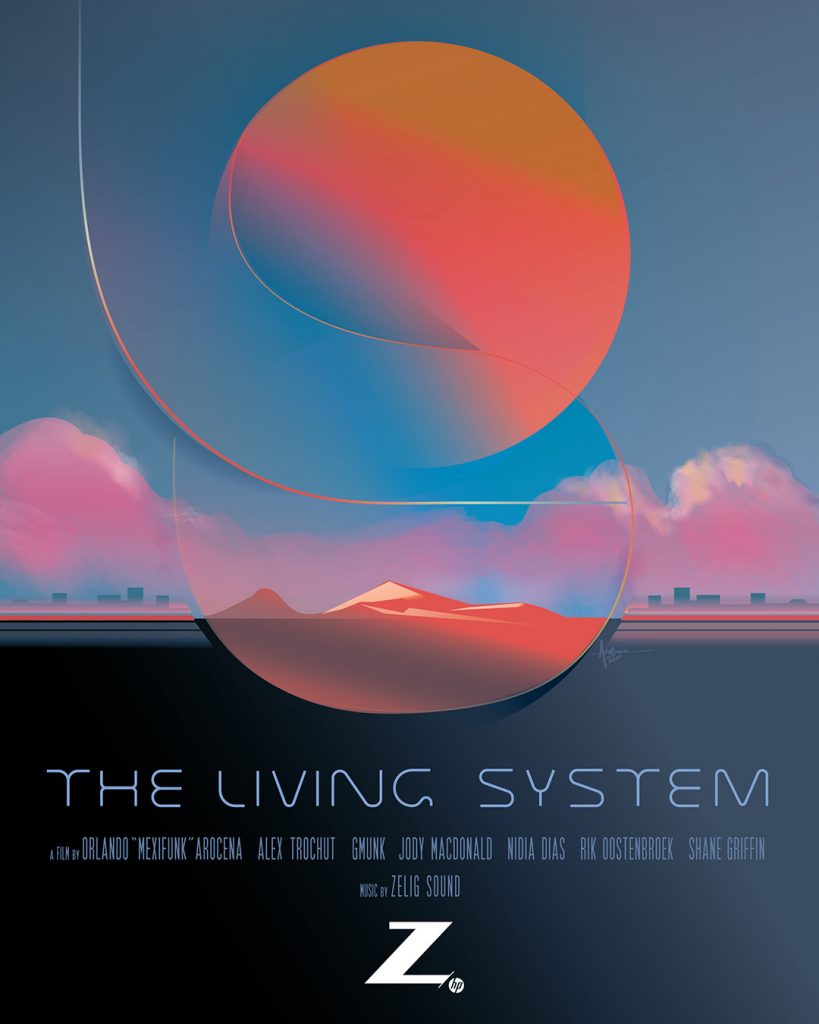 Orlando Arocena's movie poster (Image courtesy of Z by HP)[/caption] “I really wanted to represent all of these ambassadors and their hard work that's gone into their individual chapters within this living system movie,” he says. “So, I picked up on cues like color palettes, different types of characters, whether they're very organic or whether they're the essence of clouds and smoke. Some of them are more concrete, like urban jungles, cityscapes. It's a really beautiful cacophony of everyone's viewpoints as far as atmosphere and environment and everything that's peripheral to your vision, but yet focused in at 12 o'clock in front of you. We played upon our strengths. We looked at how diverse we are individually and we wanted to use that as a benefit.” A Mexican-American vector artist, creative director and creative brand strategist based in Colombia, Arocena draws from his upbringing in the Bronx and with hip hop to infuse his approach to vector freestyle (evolving an abstract doodle into something recognizable). “When you vector freestyle, you're honed in, you're focused and you have a theme running in your head of what you're going to want to throw out into the world and what you want to exude,” Arocena says. “I think that if it wasn't for me teaming up and being an ambassador for Z by HP, I wouldn’t have the confidence level to be able to do my freestyle vectors the way that I do without any type of pin wheeling or hiccups or slowdowns. I'm able to just open up vectors and start playing in real time, open up shapes, start drawing, start throwing down some paint brushes, and really have a lot of fun with a program that the majority of the world tends to use to build logos or to do page layouts. I'm glad to really push it in such a manner that it's untraditional.” [caption id="attachment_175604" align="aligncenter" width="1024"] 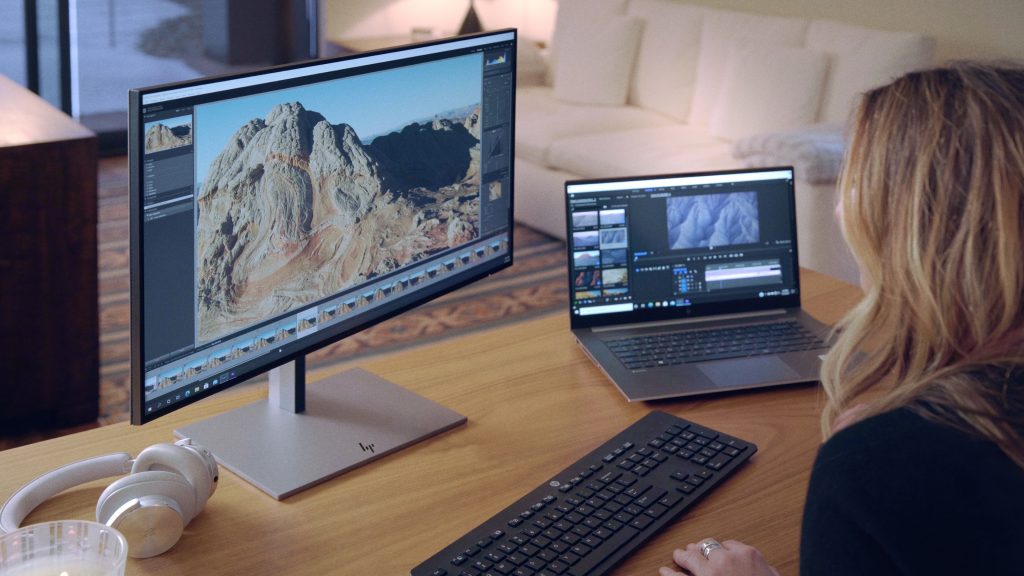 Jody Macdonald works with her Z by HP devices. (Photo courtesy of Z by HP)[/caption] By the end, all of them were happy with the way the project turned out and for the experience and insights it gave each of them. “This project created a unique opportunity to bring our Z ambassadors together, to collaborate across mediums and evolve their workflows,” said Erin Mott, head of marketing for Z by HP. “Equipped with our high-performance technology, the ambassadors truly uncovered new creative breakthroughs and inspired other creatives along the way.” “If I did this again, I don't think I'd change anything,” Dias says. “I like how things went and I like when happy accidents happened.” Find out more about this and other CoCreated Z by HP projects and tune in April 29 to a webinar featuring these artists and The Living System. Lead image: Shane Griffin's photorealistic art in surrealist outdoor lighting (Image courtesy of Z by HP)

This year, let’s resolve to make the most of our time online and better protect ourselves from online threats