News Feed
With Windows 11, a fresh perspective starts with the very first image you see on the screen: a desktop wallpaper that’s also a symbolic image of starting anew with this operating system. Inspired by flowers, this new blue beauty is called Bloom. The story of its creation spans a creative and dynamic collaboration between engineering, design and marketing teams at Microsoft, across an ocean during a pandemic and which incorporated a parallel workflow that caught the eye of Windows 11 designers. “It’s the same Windows that you know and love, but this is a new beginning, a new era,” says Christina Koehn, creative director for Windows 11, which became available Oct. 5. This new era comes with intuitive navigation, easy organization, more apps and efficient ways to be creative and productive. The user experience has been completely reimagined, simplified. It’s a clean, fluid design that is completely new, yet immediately familiar. At the heart of Bloom is a concept that merges natural and digital elements. “This is the next generation of computing for us,” says Marianna Levant, a principal designer on Koehn’s team. “We all live in both a digital realm and in a natural realm. It was important for us to encompass both. We started out really wide, far and wide, working very closely with designers both on the marketing team and on the product team. We explored a very wide variety of concepts and the one that resonated was this union between mathematics and nature.” Levant – whose background is in design and fine art and who used to have a studio in Chicago where she did large scale paintings and works on paper – says that the road to Bloom was truly a creative process. “We didn’t know where we were going to end up. It was like making a painting, creating a piece of art,” she says. “We knew what the concept was, knew what we were trying to evoke. That’s why this project was particularly challenging and particularly wonderful.” To help them in that quest for the right symbol, they found their answers with Six N Five, a Barcelona-based multidisciplinary design studio that started working with Microsoft in 2019, designing the wallpapers for then-new Microsoft Surface devices. Since then, they’ve engaged with different teams across Microsoft on a variety of projects.We didn’t know where we were going to end up. It was like making a painting, creating a piece of art.The studio builds upon a background in 2D graphic design, with tools and knowledge acquired during university years that involved learning how to work with colors, typographies, shapes, etc. But in late 2010, they shifted their focus to 3D art. In the process they realized that several hours of extra work would yield results close to reality. “From then on, there were many years of curiosity, learning and also use that have turned 3D into our own language and visual style,” says Ezequiel Pini, the design studio’s founder and creative director. While Microsoft’s internal design teams iterated in-house on their ideas for Windows 11, the studio was working in parallel on Surface screens. “We began collaborating with Six N Five to reinvent the desktop wallpapers for Surface devices a couple of years ago,” says Samuel Clarke, creative director for Modern Life (Windows, Surface, Microsoft 365, Microsoft Edge). “Their unique take on interpreting the physical world through digital techniques brought us together. They create calming and serene scenes that always felt like a perfect fit for how we wanted users to feel when using our products.” Eventually, the workstreams converged as Six N Five’s dynamic flower struck all the right notes for the Windows 11 designers. 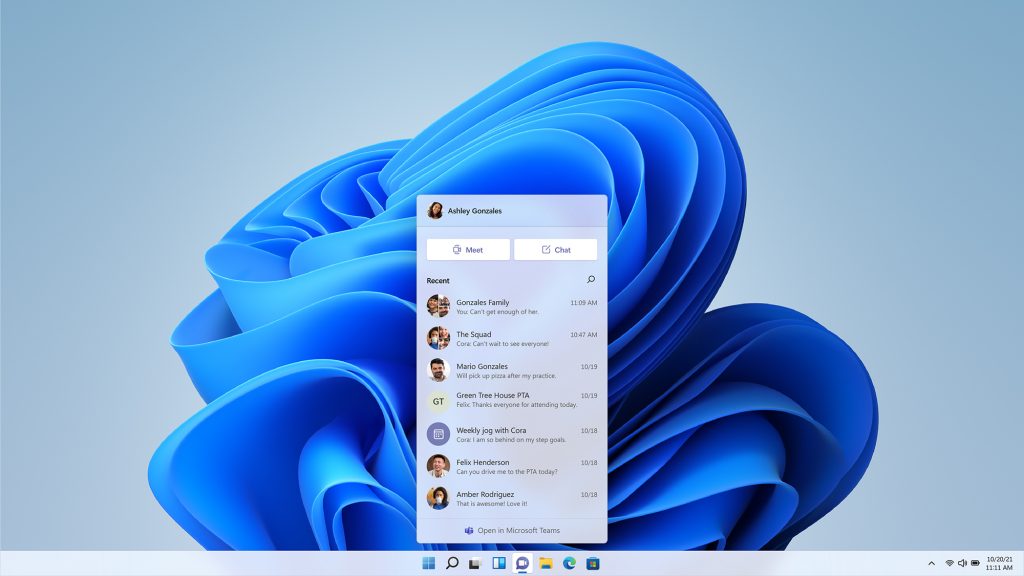 “The thing about Bloom is that it has movement to it,” Koehn says. “It doesn't look like it's a static object. You could almost imagine it moving around ambiently changing shape, morphing.” When it came to their approach to Bloom, Six N Five found inspiration in the premise of examining natural realms and their relationship with the abstract and digital work created by its people. For them, a flower blooming for the first time represented “a new and fresh beginning.” Flowers – particularly roses – inspired them. But they also found a compass in Windows blue, “a vibrant” hue that Pini says “has been key in this process when it came to coloring.” It's a color that was critical to identify with Windows 11 and to signal something new to consumers, says Karina Vivas, director of Windows integrated marketing. “We are purposely using its electric blue color as a creative through line across different elements.”

Windows’ prominence in day-to-day routines also played a big part in the design approach. “I think we belong to a generation in which the digital world has evolved to the point where it has become part of our daily lives. It is now natural to us, our own extension and work,” says Pini. “There are so many tasks that we practically can't do without our computer. This evolution will continue to advance over time and, for us at least, Windows 11 represents this evolution towards what's new.” With Windows 11, translucency through new materials like Mica becomes more prominent, explains Koehn. “As our desktops get more and more complex and we have more and more windows open, it's good sometimes to have the transparency of some materials help you see what's in focus and what might be in the background,” she says. “We wanted to make sure that the wallpaper of the operating system actually enhanced those materials. So we built those materials in such a way that they really take in the color that's behind them. They reflect light. If you design the wallpaper in such a way that it has a range of color, it has vibrancy in the right places where you know that you're going to have materials on top of it, the two actually complement each other really well. And the materials look beautiful when you see Bloom coming through behind it. So that was definitely a consideration as we designed the form of Bloom as well as the color range.” Bloom was meant to complement the new centered layout of Windows 11, which includes the taskbar and the Start menu. And from a practical standpoint, it was important to the design team to have negative space around the image so that folders and files could be placed on the desktop, reducing visual clutter. 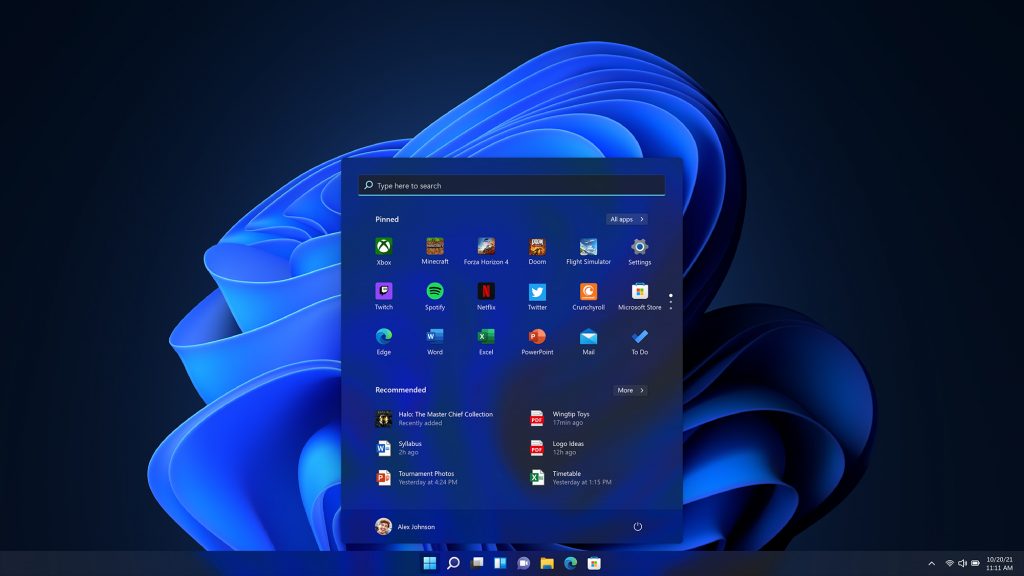 Turns out that centered layout was one of many factors that Six N Five had to work through. “The most complicated thing was to find a beautiful and harmonious composition which would work not only aesthetically as a wallpaper, but also in coexistence with the central menu of the new operating system,” Pini says. “We started creating loads of images, just experimenting and playing around with the material Microsoft gave us. That was the easy part, but then it was time to choose a path to follow and narrow it down.” Pini’s studio ended up being in charge of the main image design and animation for the project, while the Microsoft design team helped them with guidelines and sketches to make the piece fulfill all the necessary requirements. Six N Five also developed two theme packs for Windows 11: one that comes from new explorations inspired by Bloom and one based on the design of imaginary landscapes. 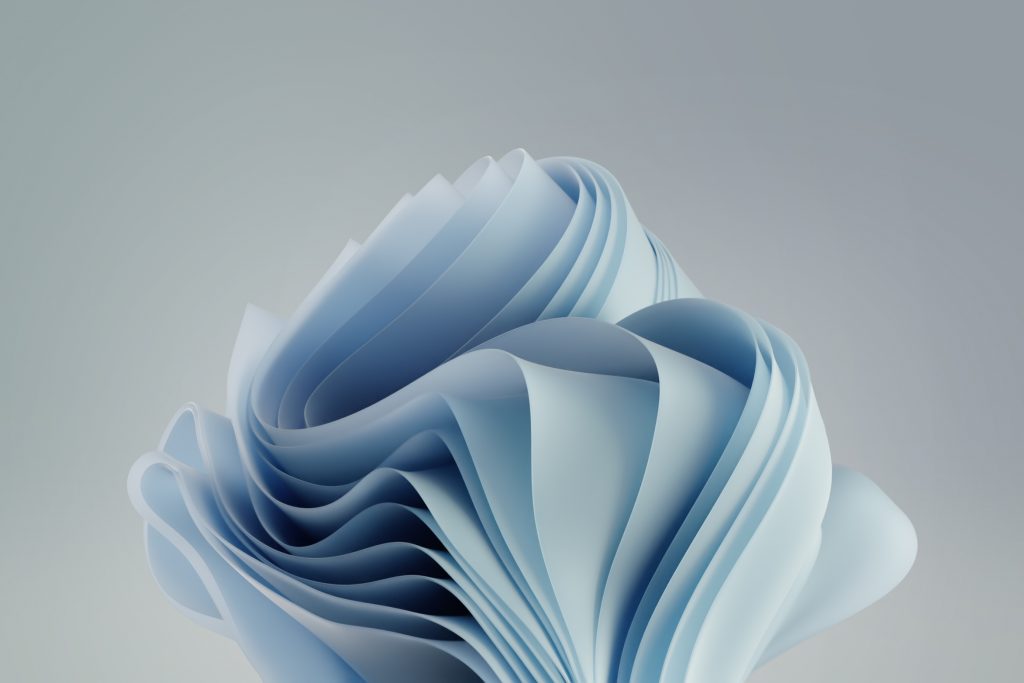 For Six N Five, having such a pivotal role in developing Bloom is “a dream come true.” “The word ‘Windows’ not only evokes nostalgia for the first contact we had with a computer 20 years ago, but it also continues to be the operating system that we are using 20 years later,” Pini says. “It has been our companion in all this process and professional development since the very beginning. Knowing that this new version of the OS will have an image from our studio, which in turn will be seen by billions of people, is a dream difficult to explain in words.”

Embrace your spirit of exploration with Minecraft x Burberry partnership