Today, we are releasing Windows 10 Insider Preview Build 17692 (RS5) to Windows Insiders in the Fast ring in addition to those who opted in to Skip Ahead.


SwiftKey gives you more accurate autocorrections and predictions by learning your writing style – including the words, phrases and emoji that matter to you. It’s available for Android and iOS, and starting with today’s build SwiftKey will now power the typing experience on Windows when using the touch keyboard to write in English (United States), English (United Kingdom), French (France), German (Germany), Italian (Italy), Spanish (Spain), Portuguese (Brazil), or Russian.


Control whether media can play automatically: One common piece of Insider feedback for Microsoft Edge is that you want more control over autoplay videos. In this build, we’ve added a new setting in Microsoft Edge to allow you to control whether sites can autoplay media. You can find an early preview of this setting under “Advanced Settings,” “Allow sites to automatically play media.” We’ll be improving these options and adding additional controls in upcoming flights and in response to your feedback, so stay tuned!

EDIT: Woops! We got a little too excited about this – this change is actually coming in a new build in the next few weeks. Stay tuned!

WebDriver improvements: Beginning with this build, we’re making it easier than ever to automate testing in Microsoft Edge using WebDriver. First, we’ve made WebDriver a Windows Feature on Demand, so you no longer need to match the build/branch/flavor manually when installing WebDriver. When you take new Windows 10 updates, your WebDriver binary will be automatically updated to match.

To install WebDriver, just turn on Developer Mode in Windows 10 Settings, or install the standalone feature under the “optional features” Settings page.

We’ve also updated WebDriver to match the latest W3C Recommendation spec with major new improvements. You can learn all about these changes over at the Microsoft Edge Dev Blog.


Make Text Bigger: We’ve heard your feedback and are excited to announce that the ability to increase text size across the system is back and better than ever! When you go to Settings > Ease of Access > Display in today’s build, you’ll find a new setting called “Make everything bigger” – this slider will adjust text across the system, win32 apps, and UWP apps. 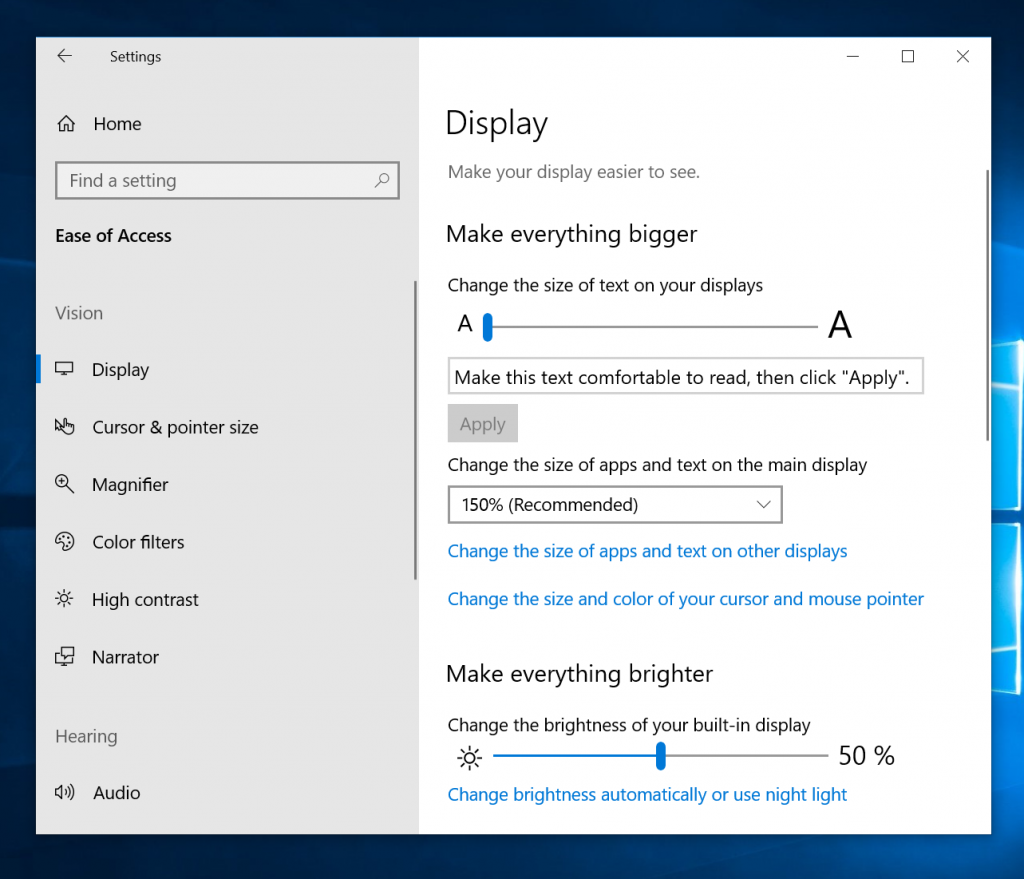 That means you can now make text bigger in Start menu, File Explorer, Settings, etc., without having to change the overall scaling of your system. Please try it out and share feedback!

Note: We’re investigating some issues with text clipping, not increasing in size everywhere, and problems when changing DPI settings.


Based on your feedback you’ll find we’ve made a bunch of updates to Narrator with today’s build:


We would love to hear what you think as you try out these improvements. This link will take you to the Narrator section of the Feedback Hub, or you can press Caps + E while Narrator is running.


We’re now rolling out more functionality to the RS5 Game bar. In this flight are the following new features: 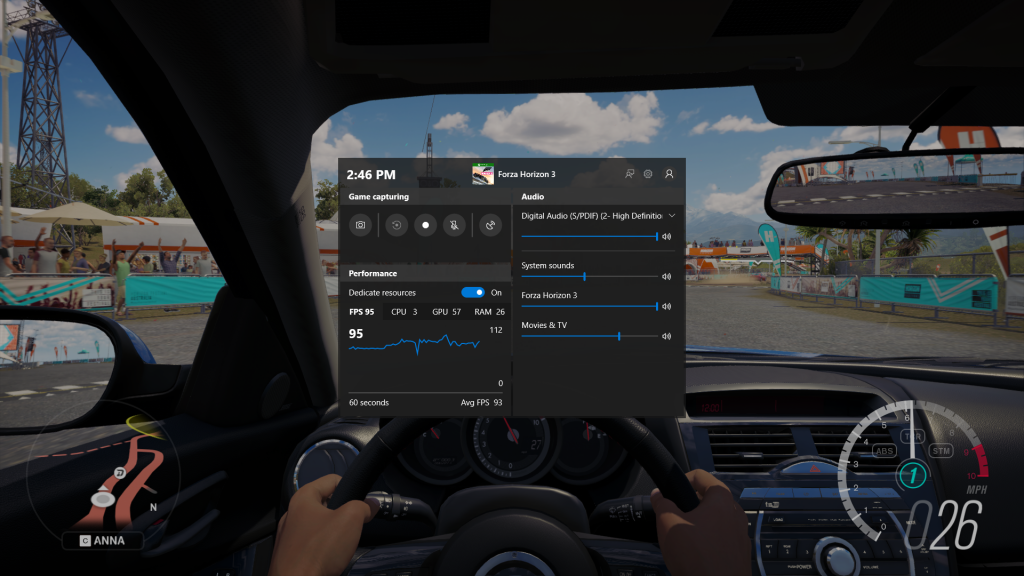 
New options are now available for Game Mode that are expected to improve the gaming experience on desktop PCs. Gamers on PCs with many background processes may also see performance improvements when they toggle “Dedicate resources” in Game bar.


Find software downloads faster in Search! Continuing our theme of improving the search preview experience, we’re rolling out an update to make it easier to find official download pages for Windows software you want to install. The team is continuing to develop this experience and more is coming. Check out the example below, and let us know what you think! 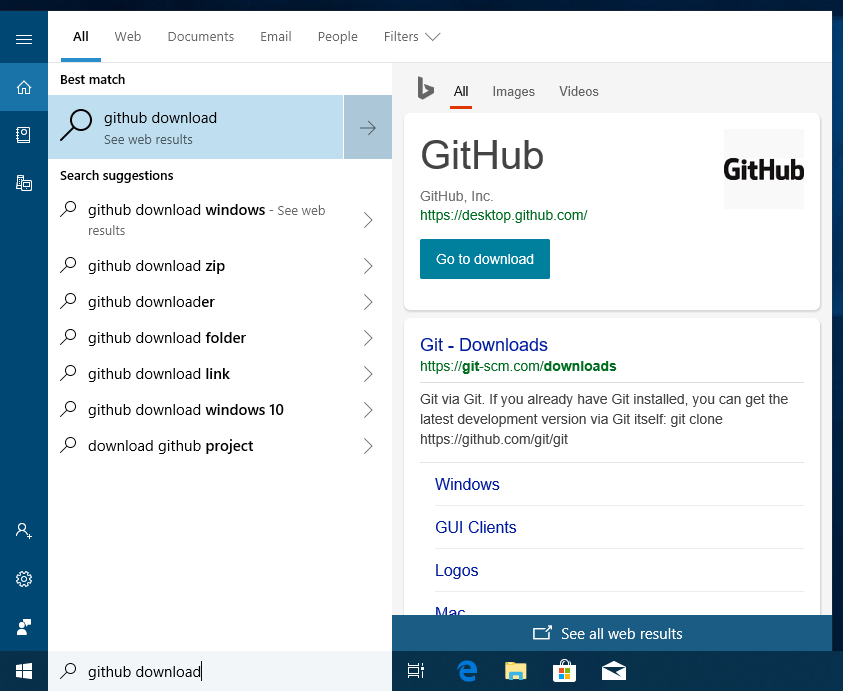 This is a server-side* change so Insiders may see this update outside of Build 17692.

*Some experiences may vary by region.


Starting with this build you can stream audio to both the headset and the PC speakers simultaneously. To try it out make sure that you can hear sound from your normal PC speakers when not running the Mixed Reality Portal (MRP) and from the headset’s audio jack or built-in headphones when mixed reality is running. Then close all apps, including MRP, and go to Settings > Mixed reality > Audio and speech to turn on “When Mixed Reality Portal is running, mirror headset audio to desktop.” You should now hear audio from both the headset and PC speakers when running mixed reality.

You may also notice some new error codes in Mixed Reality Portal to be more specific to certain failures. The Mixed Reality Portal app will also begin updating through the Store as we make infrastructure changes over the next several releases to support faster updates of mixed reality.


We’ve got two stories from the Insider Community we want to highlight!


And heads up Boston – Brandon LeBlanc and Jason Howard will be at the Prudential Center Microsoft Store on June 23rd from 1pm EST – 4pm EST to meet with Windows Insiders for some fun discussion on Windows 10! RSVP: https://aka.ms/bostoninsiders 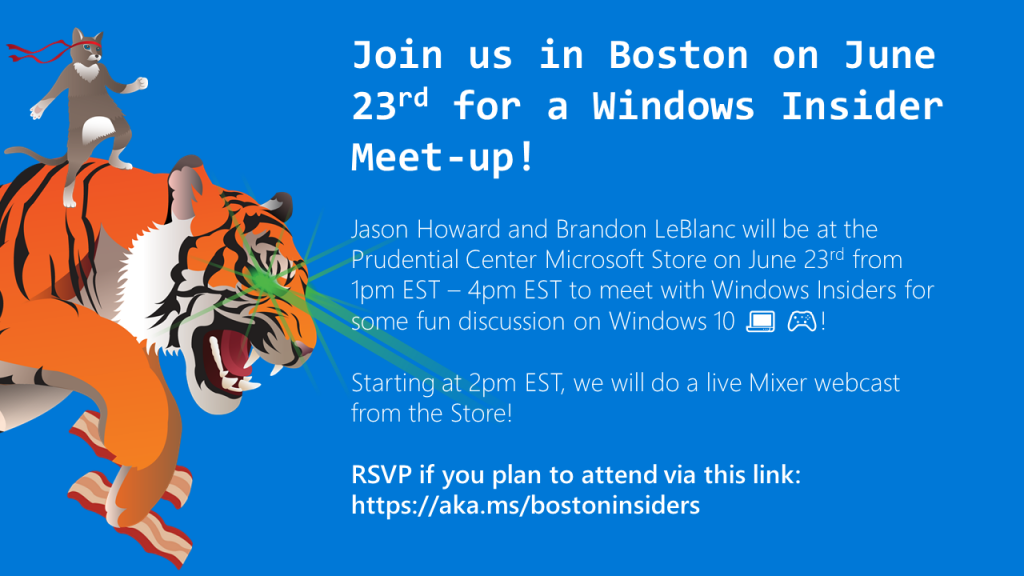 
Our next Bug Bash will be from June 22nd – July 1st – we will be holding a Bug Bash Webcast on our Mixer channel on June 27th, exact timing will be announced closer to the date. We’re excited to do another Bug Bash with our Windows Insiders!