Improvements to news and interests on the taskbar​

Thanks for all the feedback on news and interests, which we announced in last week’s blog post. The team has been reading it all! We’re continuing to improve the experience and this week are happy to announce a handful of fixes:
With news and interests on the Windows taskbar, not only do you get quick access to the latest headlines and weather, but you also get real-time traffic conditions and alerts that update throughout the day. If you click on the Traffic card, you’ll see details on the traffic alerts, traffic cameras, and traffic times between nearby cities with a bigger map experience. We also wanted to take a moment and talk a little more in detail about the weather experience that news and interests on the Windows taskbar provides. Current weather conditions are shown to you directly on the taskbar, so that you can stay up to date on weather conditions at a glance. The weather information displayed on the taskbar updates throughout the day, so that you see an accurate visual representation of current weather conditions in your location, along with the temperature. You can change the location of the weather you see by clicking on the three dots on the Weather card and then clicking Edit location. It’s easy to click through for the forecast, too—just click on the Weather card to see an immersive weather experience with accurate, state-of-the-art forecasts, on interactive, animated maps that make the weather easy to understand, along with timely news for severe weather events. 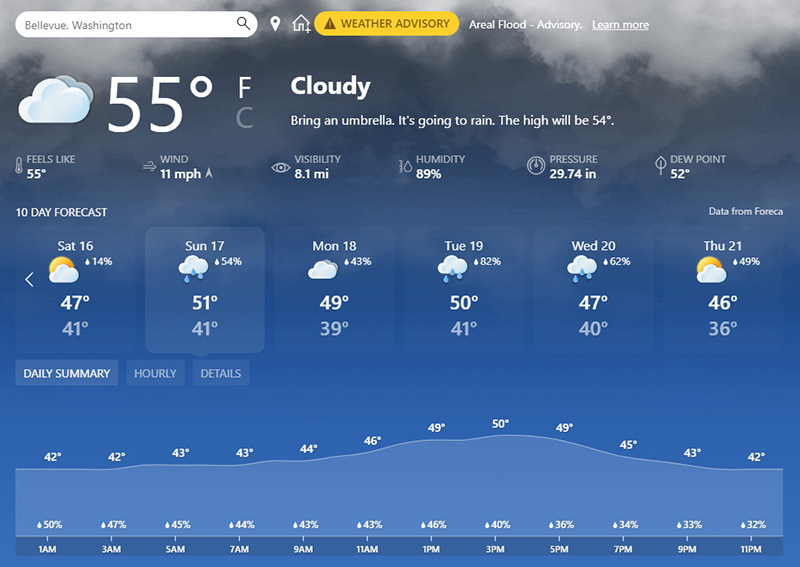 ​
As a reminder, news and interests is currently available to a subset of Windows Insiders in the Dev Channel right now. Managing the rollout of features like this allows us to quickly identify issues that may impact performance and reliability. We plan to evolve this experience over time, so please let us know what you think and how we can make it better through Feedback Hub (go to Desktop Environment > News and interests). The team is excited to hear what you think! IMPORTANT NOTE: This feature is currently only available to Windows Insiders in United States, Canada, Great Britain, Australia, and India. This feature also requires the new Chromium-based Microsoft Edge browser (Stable) to be installed on your PC. We are also testing different variations of this experience so some Insiders may see a different experience than others.

Listen to episode 39 of the podcast now!​

Listen to our latest episode of the Windows Insider Podcast and join the Windows Insider team in looking back at the last year and its changes, then ahead at 2021 and what we expect to see next. Listen via your favorite podcast app or on our website.


Mark your calendars for the January webcast​

You can check out our Windows Insider Program documentation here, including a list of all the new features and updates released in builds so far. Are you not seeing any of the features listed for this build? Check your Windows Insider Settings to make sure you’re in the Dev Channel. Submit feedback here to let us know if things weren't working the way you expected. If you want a complete look at what build is in which Insider channel, head over to Flight Hub. Please note, there will be a slight delay between when a build is flighted and when Flight Hub is updated. Thanks, BLB