Staff member
Premium Supporter
I've only ever played COD4 demo.. Some how i just never got into that series...
A

Well the only game I've played the last two weeks would be ArmA2. Great game!

Staff member
Premium Supporter
Hi Zirkoni,
welcome to the forum and thanks for the info!
R

I've been playing NFS Shift with my Logitech G25 lately. And, today I just got back into playing Thief Deadly Shadows. I also play Multi Theft Auto: San Andreas (MTA 1.0.1; GTA: SA multiplayer mod). I have a lot more games as well, but I'm only going to load on the ones I want to use the most. I also play some D&D Online (MMO) occasionally. Last night, I played my first multiplayer Checkers from the Games window and I won, woo.

I can't wait for Diablo 3 to be released. That game looks awesome, having owned and played D1 and D2. Also, I'm looking forward to Bioshock 2 as well. I might even load back on Bioshock 1 again because it too is pretty fun.

Staff member
Premium Supporter
Hi rBridgman,
Bioshock,, Always wanted to play that game but never got round to it.. Like you say Bioshock 2 looks like it'll be a cool game 2.. As for latest games I'm currently building pyramids with 'Children of the Nile', a brilliant RTS. Have you tried Battleforge?

This week i have been mostly playing Fallout 3....

No, I haven't tried Battleforge before.

Mirror's Edge is another fun one but may take many tries to complete a mission due to much strategy needed.
R

I just bought Batman Arkham Asylum on Saturday and it's so fun. It runs like a dream and the effects are surreal.

Staff member
Premium Supporter
Cool.. I played the demo only but like you say..it does look good. I've been meaning to get it but keep forgetting. Oh well, maybe one day...
D

I just got Mass Effect, has a good graphic and lots of weapons.

Staff member
Premium Supporter
Hi degal,
thats another game I keep meaning to get...
I

Premium Supporter
Mass Effect seems to be a pretty sweet game. I downloade a version of it and tried it and it was far better graphics and weapons than i ever anticipated.
E

Been playing need for speed shift, bad thing using arrow keys for the moment till i pick up a controller, pretty badass graphics too, besides the card running it 14-40 fps with all settings amped to the higheest in ccc & game, hit 14 fps drifting around corners with many cars around me, I tried taking a screen shot but comes out as a black box the size of my screen rez.

Just got Borderlands this morning....man this game rocks! runs super fast totally maxed out and the 4 player co-op is flawless thus far.

Staff member
Premium Supporter
Thanks for the tip Highwayman, I've seen the game around but never knew too much about it. I'll check it out.

Borderlands basically plays like a Mad Max version of Diablo done as FPS....brilliant !, graphically it reminds me of videos by Gorillaz 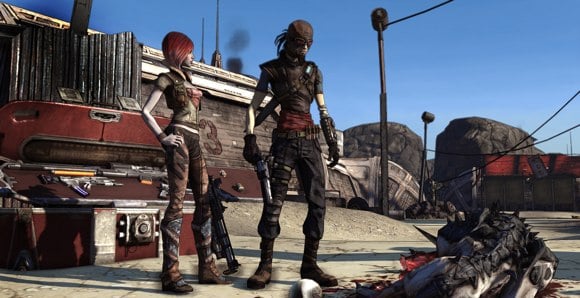 I just finished BioShock and it looks great in 3d with 3d Vision. I now choose my games with the rating ppl give in 3d.

I just started Prototype, and MAN! This is Awesome! really, one of the best game i played this year. specially in 3d!
You must log in or register to reply here.

Microsoft and Samsung expand partnership, empowering you across work and play